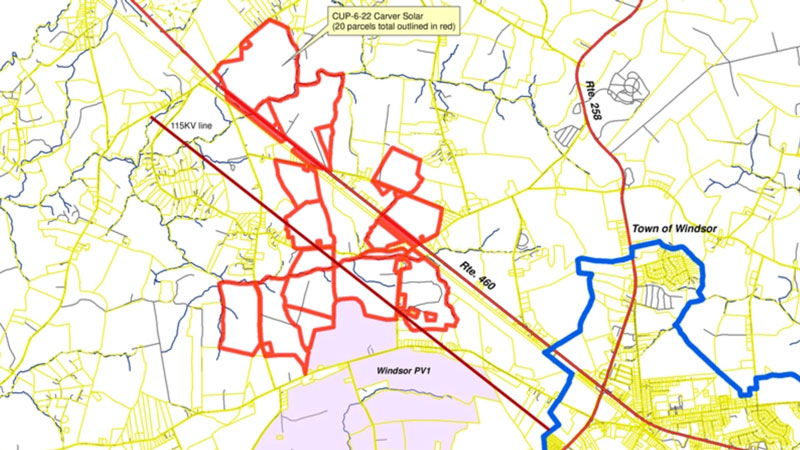 Isle of Wight County supervisors postponed voting on a proposed 71-megawatt solar farm and substation in the Zuni area after hearing over an hour of commentary on the project on Jan. 18, mostly in opposition.

The proposed Carver Solar facility would span 20 parcels totaling 637 acres. The land straddles both sides of Route 460, with the solar farm’s proposed borders stretching from just over one mile east of the village of Zuni to just under a mile west of the town of Windsor.

Texas-based Open Road Renewables subsidiary Carver Solar I LLC has applied for a conditional use permit on behalf of 13 families who own the land.

Paul Garris of Zuni contended the proposed solar farm would “decimate” Isle of Wight’s country scenery. Debbie Arrington, also of Zuni, said she’d been told by her doctor that the electromagnetic fields produced by solar farms could potentially interfere with a medical implant in her spine. Wayne Smith Jr. then handed county staff a petition he said bore the signatures of 449 area residents opposed to the project.

Chester Carr of Windsor, who owns three contiguous parcels slated for the Carver solar farm, argued the project would produce “clean and necessary energy.” Richmond resident Carter Garrison, whose family is also one of the 13 involved in the project, also expressed support for the solar farm.

Garrison had told Isle of Wight’s Planning Commission in November the story of how his great-great-great-grandfather William Uzzle moved to Isle of Wight from Southampton County in the 1860s, and shared the same story with the supervisors.

According to a presentation Open Roads personnel showed the supervisors, there is “no firmly established link” between electromagnetic fields, or EMFs, and health concerns. Open Roads contends EMF levels emitted by utility-scale solar inverters reduce below background levels at a distance of 150 feet. Open Roads has committed to a 200-foot minimum setback from Route 460, Cut Thru Road and any residential parcels. The Planning Commission, when voting to recommend the project’s approval, had imposed a condition mandating that any inverters, which convert direct current electricity generated by the panels to the alternating current that feeds into the power grid, be placed at least 500 feet back from any property lines to minimize noise levels.

After nearly another hour of discussion among the supervisors following the public hearing, Supervisor Joel Acree said he was still “straddling the fence” on whether to grant final approval.

The project, Supervisor Don Rosie added, has pitted “farmer against farmer,” though he called Carver’s proposal the “best program possible.”

Supervisor Dick Grice made a motion to table the matter for at least a month if not longer, which passed unanimously.

If approved, Carver would become the seventh utility-scale solar farm approved in the county.

Isle of Wight’s only operational solar farm, a 20-megawatt facility known as Woodland, occupies 180 acres off Longview Drive. It began generating power in 2017.

In 2018, Isle of Wight approved another 20-megawatt farm known as Solidago on 193 acres near the Isle of Wight County Courthouse.

The roughly 300-acre, 40-megawatt Ho-Fel farm near International Paper’s Franklin Mill received initial approval in 2019 and is proposing to expand, though the original project has yet to break ground.

The county also approved the 730-acre, 85-megawatt Windsor PV-1 farm in 2019. Windsor PV-1 would be located adjacent to the proposed Carver farm.

In 2021, Isle of Wight approved the 240-megawatt Cavalier farm, which will span 1,750 acres across the Isle of Wight-Surry county border.

In 2022, the county approved a sixth farm known as Nuby Run, which will generate 2 megawatts and occupy 20 acres on Orbit Road.