Windsor girls basketball team has its eyes on a title 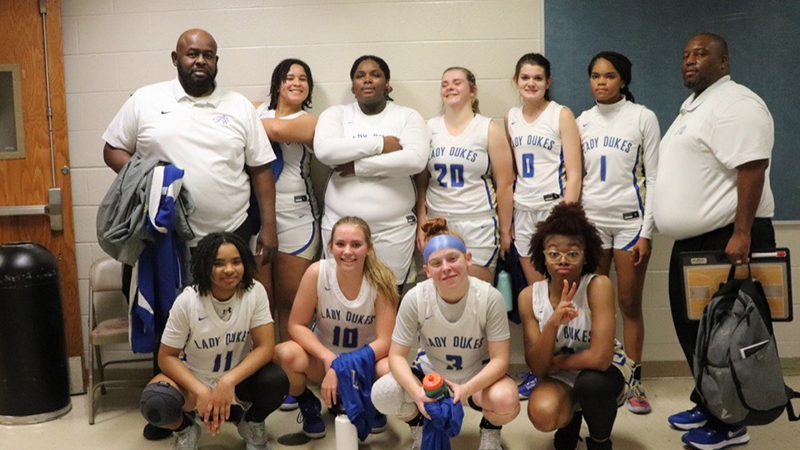 Windsor High School’s varsity girls basketball team experienced its first losses of the season earlier in January, but the Lady Dukes have since returned to winning form as they pursue their first regular season Tri-Rivers District championship since 1970.

On Wednesday, Jan. 18, Windsor defeated visiting Southampton High School 47-25 to improve to 10-2 on the season, including a 7-1 record in the district.

Windsor Head Coach Wilhelm Johns said he is pleased with his team’s winning record but not surprised.

“We only lost one starter from last year, so we have a strong team,” he said. “This year my two captains are (senior) Melissa Carr and Keaera Kea-Towns. They bring great leadership. Melissa is a four-year captain and has been an anchor on the team.”

Johns said the team’s leading scorer is Mariah Stephenson; she has been averaging 15 points a game.

The coach noted that his squad’s developmental process must continue in order for the unit to achieve its goals.

“Still have a lot of work to do to get to where we want to be,” he said.

The Lady Dukes lost for the first time during their 2022-23 campaign when they hosted Nansemond River High School, a Virginia High School League Class 5 school, on Jan. 4. The final score was 51-34.

In the Lady Dukes’ next game, which came on Jan. 11, they fell 47-42 on the road against district foe Greensville County High School.

“I knew that Nansemond River would be tough because we were just coming back off a two-week break,” Johns said. “(At) Greensville, we missed a lot of free throws.”

Almost every one of Windsor’s remaining regular season games, which stretch across the next two weeks, are against district opponents, putting a spotlight on the team’s immediate goal.

“Our goal is winning the regular season district championship for the first time since 1970,” Johns said. “We currently sit second place and one game behind Brunswick, which is undefeated.”

The Lady Dukes have yet to face Brunswick High School, but they will do so in back-to-back contests, first at home at 6 p.m. on Monday, Jan. 30, and then on the road at 6 p.m. on Wednesday, Feb. 1.