Thanks for giving me a river 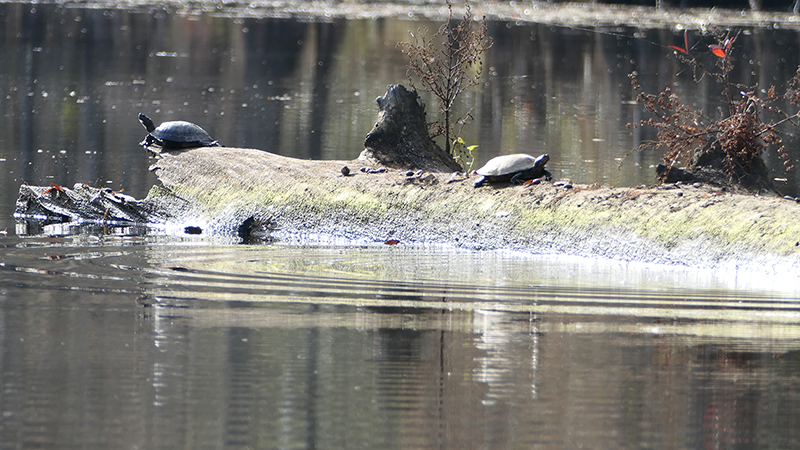 This photo highlights turtles that RiverGuard Jeff Turner saw during his Nov. 21-23 patrol on the Nottoway River below Delaware.

Spirit of Moonpie and I spent November the 21st through the 23rd on the Nottoway below Delaware. The water was crystal clear, very low and 44 degrees. That’s 13 degrees colder than last week. Air temps ranged from 30 to 56 degrees. The water still looked scummy, especially the closer one got to the boat landing, that’s just an observation. I also smelled sewage at the gut at Monroe Bridge. I’ll be looking into that closely. I picked up very little trash, but it was still more than normal for this part of the Nottoway.

The fishing on this trip was only fair. I tried for yellow perch and stripers but didn’t catch a one. I caught only three largemouth and one nice chain pickerel. The Jack I caught while jigging the blade bait for yellow perch. I caught the bass on the Mepps#3Minnow. I’m sure there are a few stripers in the river by now. Next patrol I should find them… if the river does not dry up!

I reckon the eagles are pairing up as well as the hawks. I saw two eagles near the Narrows flying way up high, circling around each other for quite a long time… till my neck started hurting. I also saw another near Monroe Bridge. The hawks were just being very vocal and seemed to be having a lot of conversation between themselves. The coyotes also got vocal one night after going to bed. I’ve already posted that audio on Facebook. I love hearing them; it gets the old blood going late at night — hhhaaaa!

So, it was a very nice trip. I wasn’t out there for Thanksgiving proper, but I gave thanks while I was out there for God providing me such a wonderful place that I love so much on the two rivers we call the Nottoway and Blackwater.