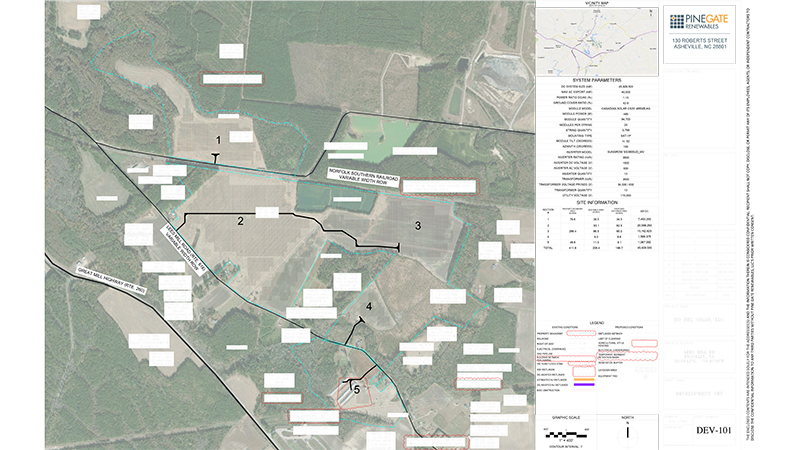 Developers looking to add acreage to a planned solar farm received a favorable vote from Isle of Wight County’s Planning Commission on Oct. 25.

SolarGen of Virginia LLC, a subsidiary of Colorado-based Aquasan, had received approval from Isle of Wight supervisors in 2019 to build a 55-megawatt, 300-acre project named the Ho-Fel solar farm on Lees Mill Road near International Paper’s Franklin mill. Asheville, North-Carolina-based Pine Gate Renewables has since purchased the project – which has yet to break ground – and is now proposing to expand the facility by 18 acres.

According to Matt Boerger, Pine Gate’s project permitting manager, the original proposal had called for  fixed-position solar panels, whereas Pine Gate is now proposing to use the type that rotate to follow sunlight. The project will still have roughly the same amount of land covered by solar panels, but the panels will be spaced further apart to facilitate their motion, which is why more land is needed, Boerger said.

The redesign would lower the anticipated output from 55 megawatts to 40, which Pine Gate contends is still enough to power up to 6,000 homes. The generated electricity would be fed into Dominion Energy’s power grid.

According to Scott Foster, a member of Pine Gate’s legal team, the county would receive just over $207,000 in taxes over the next 40 years from the land were it left in its current agricultural state. Under Isle of Wight’s default machinery and tools tax rate, the project would generate $2.8 million over its 40-year lifespan. Pine Gate has proposed a siting agreement offering an additional $1,400-per-megawatt revenue sharing payment, which will increase by 10% every five years, bringing roughly $4.5 million in total revenue to the county over the project’s lifespan.

There is a cemetery located on the site, for which the company has pledged to maintain 24-hour access.

Ahead of the vote, the Commission held a public hearing, which drew only one speaker: David Tucker of Old Stage Highway.

Tucker inquired about stormwater management, testing of the site’s soil and water for any toxins leaching from the panels, and whether the panels would be manufactured in China.

According to Ashley Wall of the engineering firm Kimley-Horn, the conversion of agricultural land to what she termed “meadow” condition for a solar farm “actually creates a decrease in the peak runoff from the site, so you actually have less water leaving the site.”

According to Boerger, Pine Gate’s procurement contract with its solar panel manufacturers states the panels may not contain “hazardous materials,” defining the term as  exceeding the U.S. Environmental Protection Agency’s parts-per-million threshold for chromium, lead and other heavy metals. The panels are manufactured in four Asian countries, but “not China,” he said.

Commissioner Thomas Distefano motioned to recommend the project’s approval on the condition that the panels be “tested for hazardous constituents, using laboratory testing such as a TCLP,” that a sign be posted at the project site providing contact information for a local project manager, and that the field be cut by Aug. 1 annually if allowed to go fallow prior to construction of the solar farm.

A Toxicity Characterization Leaching Procedure, or TCLP, test according to the Institute of Electrical and Electronics Engineers, tests damaged and end-of-life panels to determine if they will leach toxic metals.

According to Boerger, Pine Gate personnel will inspect the panels for damage once or twice a month, and remotely via computer software.

“Our goal is to generate enough power, and we know it when these things aren’t performing at optimal performance,” Boerger said.

The matter will head to Isle of Wight’s Board of Supervisors for a final decision Nov. 17. If approved, Pine Gate anticipates the project would come online within the next year to 18 months.

Editor’s note: This story has been updated to correct that SolarGen of Virginia LLC is a subsidiary of Colorado-based Aquasan.