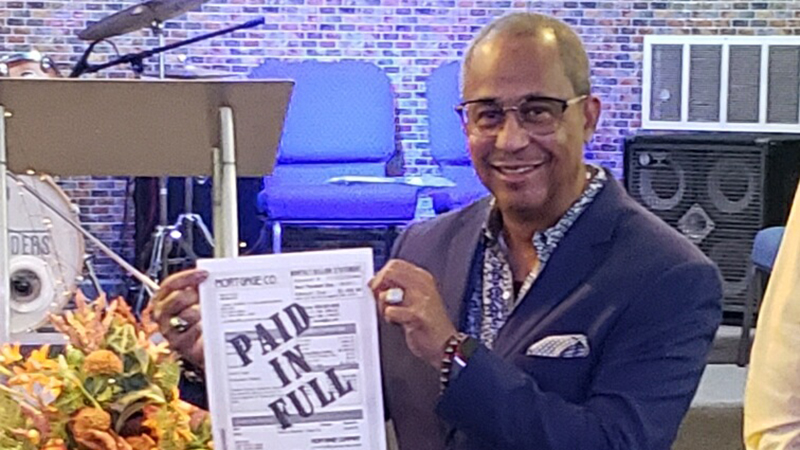 Executive Pastor Faith Bridges estimates that the church started in 1978.

“We actually initially went into debt in ’85 when we built the building that we’re currently in,” she said, referring to the facility at 1101 Johnson Circle in Franklin. “And it’s not a matter that it took that long to pay that off, but as we went and acquired other assets over the years, it never actually cleared out the debt completely before taking on the next project.”

But what helped New Life emerge from debt in 2022 was people’s participation in the “All In Capital Campaign.”

Bridges noted that the church opened the campaign to anyone who would give, starting with its parishioners and then expanding to “those who were connected to us as our partners, some in person, some online, as well as other friends of the ministry who felt compelled to make a donation.”

She said that God blessed the campaign, “and we had a supernatural experience in that we were able to pay off this debt.”

In a Friday, Oct. 21, interview, Majette said the church’s debt was officially paid off around two weeks prior.

“For me it was a milestone,” he said. “I call it the close of one era and the opening of a new era.”

New Life Church was founded by the late Bishop William Saunders, who was a major influence in Majette’s life.

“(Paying off the debt) was very personal because the late Bishop William Saunders was my pastor for years,” Majette said. “It all started with him, and for me to come back 30-plus years later and to help close this out, it was a great feeling.”

Bridges and Majette both also reflected on what being debt-free means for the church’s future.

“For me what that means is we now have an opportunity to do so many other things within the community without being restricted by this debt that we had,” Bridges said. “So it just allows us to walk in the vision and the mission of this work.”