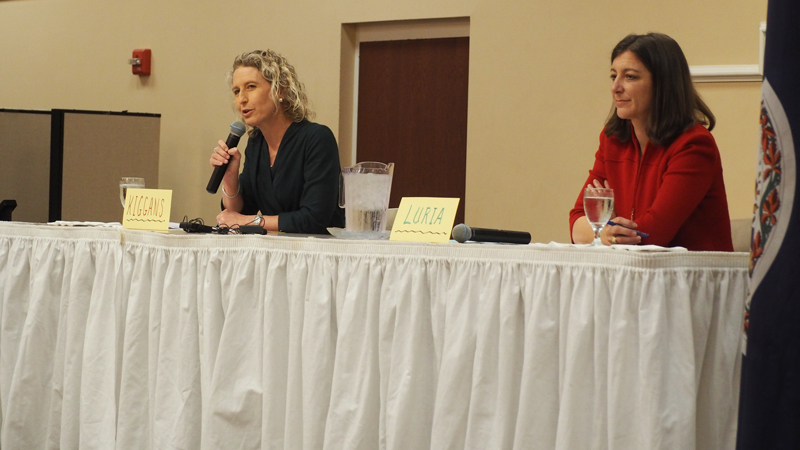 U.S. Rep. Elaine Luria, D-Va., faced off with her Republican challenger, state Sen. Jen Kiggans, at an Oct. 17 forum in Smithfield, held 21 days ahead of the Nov. 8 election.

The candidates are competing in the recently redrawn 2nd Congressional District, which includes Isle of Wight County.

Each candidate had five minutes to make an opening statement. Kiggans, who won the right to speak first via a coin toss, used the time to tout her experience as a Navy helicopter pilot-turned-geriatric nurse practitioner and pledge to “restore American strength.”

“I feel like our country is in a place of weakness. … Our parents are fighting to be recognized as primary educators with their children,” Kiggans said. “They know what’s best for them and they’re being ridiculed for demanding to have a voice in our schools. … After a chaotic withdrawal from Afghanistan our world is less safe and our military is weak.”

Luria, also a Navy veteran, then touted her bipartisan efforts during her last two terms in Congress to increase defense spending and health care access for veterans. After being elected vice chairwoman of the House Armed Services Committee in 2021, she noted she’d gone “behind the committee chair’s back” to work with the committee’s ranking Republican, U.S. Rep. Mike Rogers of Alabama, to get $37 billion added to the defense budget this year.

“The budget that came over from the Navy wanted to decommission 24 ships and only build eight; we turned that around, we authorized 15 destroyers, speeding up the construction of Virginia class submarines,” Luria said, noting she’d also helped pass legislation expanding access to Veterans Affairs health care for “blue water” Navy veterans – the term referring to those who served on ships off the coast of Vietnam – who were exposed to agent orange during the Vietnam War. Luria also noted she’d sponsored legislation included in the recently signed PACT Act to do the same for Iraq and Afghanistan conflict veterans exposed to toxins.

The debate then turned to abortion, a topic that’s reignited passions on both sides of the political spectrum since the U.S. Supreme Court overturned its landmark Roe v. Wade ruling earlier this year. Among the questions posed to each candidate was at what point either would consider “a fetus a human being,” which Luria called a “faith-based question.”

“I am not of a mind that my faith should be imposed on other people,” said Luria, who identifies as Jewish. She then noted she’d voted twice in the House to “codify Roe,” which had made abortion legal nationwide since 1973.

Kiggans, who identifies as Catholic, called herself a “pro-life candidate” and called abortion an “issue of women in crisis.” Kiggans then asserted her support for allowing exceptions to any law prohibiting abortion in cases of rape, incest or where the life of the mother is at risk, and called Luria an “extremist” for voting in favor of the Women’s Health Protection Act of 2021.

The act passed the House but stalled in the U.S. Senate earlier this year. According to the bill’s text, it would prohibit state-level restrictions on abortion “at any point or points in time prior to fetal viability” and “after fetal viability when, in the good-faith medical judgment of the treating health care provider, continuation of the pregnancy would pose a risk to the pregnant patient’s life or health.”

Kiggans argued the bill would allow abortions “up to nine months,” and contended the issue should be left to individual states.

On the issue of immigration, Kiggans contended the United States’ southern border is “not secure” and called for “finishing the wall” former U.S. President Donald Trump pledged to build. Luria noted she’d voted for the wall “not once, but twice” and supported the “remain in Mexico” policy enacted under the Trump administration as Title 42, but said, “What we really need to be doing is talking about comprehensive immigration reform.”

Asked what each candidate would do to help Isle of Wight County and other rural parts of the largely urban 2nd Congressional District, Kiggans called for restarting the Keystone Pipeline to lower fuel costs for farmers. The 1,200-mile pipeline, according to Associated Press reporting, would transport oil from Alberta, Canada, to Steele City, Nebraska. The project had stalled under former U.S. President Barack Obama’s administration amid opposition from environmentalists and Native American tribes along its route. Trump restarted the project, but current President Joe Biden canceled the project’s permit his first day in office.

Luria, responding to the same question on rural areas of the district, touted her support for high-speed internet expansion and funding for cleanup of the Chesapeake Bay, noting states in the bay’s watershed were “not meeting current goals.” According to a recent report by the nonprofit Chesapeake Bay Foundation, Maryland, Pennsylvania and Virginia are collectively “not on track” to reduce pollution to the levels needed for a healthy Bay” by 2025, per a blueprint established in 2010.

Luria further noted that gas prices had fallen from highs earlier this year, accusing Kiggans of wanting “your gas prices to be high” so she could capitalize on motorists’ frustration and get herself elected.

The questions then turned to the events of Jan. 6, 2021. Luria serves on the congressional committee investigating the storming of the U.S. Capitol by Trump supporters the day Biden was to be certified the winner of the 2020 presidential election. Luria called Kiggans an “election denier” for voting with state Sen. Amanda Chase, R-Chesterfield, to spend “$70 million of your taxpayer money” to conduct an election audit “in a state where Joe Biden won by 10 points” with “no hint of election fraud.”

Asked to respond “yes” or “no” to whether Biden had won a “fair and square election,” Kiggans replied only that “Joe Biden is the president, and he’s destroying the country.” Luria answered “yes,” adding Biden had been “elected in a free and fair election.”

“This is a fabricated issue that she is using, and it’s more than a subtle wink and nod to election deniers,” Luria said, accusing Kiggans of “dishonoring the oath she swore” to the U.S. Constitution as a Navy officer by perpetuating doubts about the vote.

During their closing statements, Kiggans accused Luria of running a “one-issue smear campaign” and of voting with House Speaker Nancy Pelosi “99% of the time” — a phrase she’d repeated throughout the debate — while Luria asserted her record “stands on its own.”