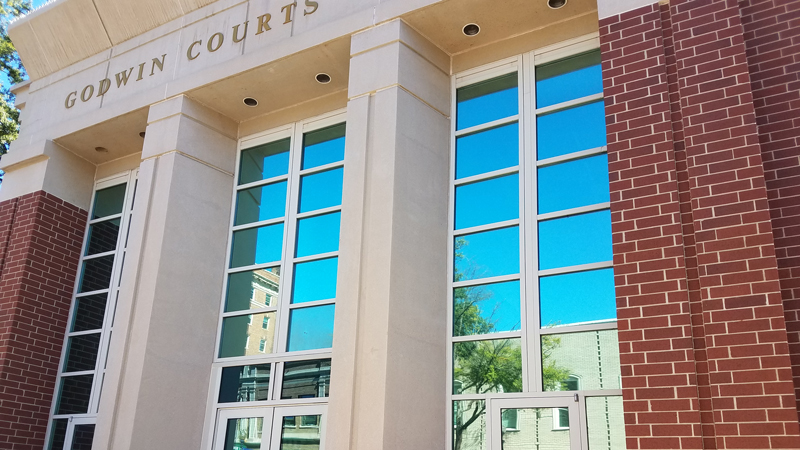 Retired Judge H. Thomas Padrick Jr., at an Oct. 6 hearing in Suffolk's courthouse, allowed a lawsuit brought by Virginia's Office of the Attorney General against the town of Windsor and its Police Department to move forward to trial.

Padrick’s refusal to dismiss the case, as lawyers for the town of Windsor had requested, marks the latest development in Virginia’s first-of-its-kind case under a 2021 state law intended to stop systemic civil rights violations by law enforcement. Earlier this year, the case saw a complete turnover in personnel and a near-total rewrite of its original claims.

Former Virginia Attorney General Mark Herring, a Democrat, had alleged in his December complaint that Windsor police had repeatedly engaged in “unlawful race based discrimination” by disproportionately stopping Black motorists. The December filing contended Black drivers had accounted for 42% of the WPD’s traffic stops from July 1, 2020, through Sept. 30, 2021, though Black people account for only 21% of the town’s population, and just 22% of Isle of Wight County’s.

In August, the trio submitted a revised complaint that, in Padrick’s words, “took race out of it” by removing Herring’s allegation and focusing instead solely on the events leading up to and following the traffic stop of Army 2nd Lt. Caron Nazario. The complaint does, however, still allege “racially-biased traffic enforcement, searches, seizures, detentions, and use of excessive force” in violation of Virginia’s systemic civil rights law.

Herring’s investigation and subsequent lawsuit had been precipitated by the release of viral video footage showing WPD Officer Daniel Crocker and now ex-officer Joe Gutierrez holding Nazario, a Black and Latino man, at gunpoint on Dec. 5, 2020, while the two shout conflicting commands at him to keep his hands out of his car’s window and exit the vehicle.

Crocker, then newly graduated from the police academy, had pulled Nazario over for allegedly lacking a rear license plate. Gutierrez, assigned as Crocker’s field training officer, responded to the scene when Crocker reported a “felony traffic stop” to dispatchers. Nazario had a temporary New York plate taped to the inside of his car’s rear window, but the officers said they didn’t see it and accused the lieutenant of eluding police for having driven roughly a mile down Route 460 to a BP gas station before stopping.

The footage culminates with Gutierrez repeatedly pepper-spraying Nazario and using knee-strikes to force the lieutenant out of the car and onto the ground, and giving Nazario the choice of being arrested or allowed to leave if he would “let this go.”

John Conrad, Windsor’s Richmond-based outside counsel, contended at the hearing that the state had “no standing” to bring its suit against the town, arguing that “multiple incidents” would be needed to establish a pattern. Conrad also attempted to argue the Nazario incident shouldn’t count, because it happened before the March 1, 2021, date Virginia’s systemic civil rights law went into effect.

Johnson, however, contended – and Padrick agreed – that a pattern was evident in Windsor Police Chief Rodney “Dan” Riddle’s decisions to hire Gutierrez and promote him to field training officer despite knowing his history of excessive-force complaints, followed by Riddle’s having waited until after the release of the viral video footage to fire him.

‘The result of policies and practices that started at the top’

The current wording of the state’s lawsuit contends the town is liable for having hired Gutierrez on June 15, 2020, and subsequently promoted him to train other officers, Crocker among them, despite Gutierrez’s pre-employment background check having revealed three prior excessive-force complaints against him.

According to the suit, Riddle learned from the background check that Gutierrez had received a one-day suspension for his use of force in 2014 while employed with the U.S. Department of Defense and had retained an internal affairs report on Gutierrez from his previous tenure as an auxiliary WPD officer in 2015.

The 2015 use-of-force complaint, according to the suit, was dismissed due to the complaining driver having not returned phone calls from internal affairs, though “the incident was witnessed by a ride-along passenger.” The background check also revealed a third incident from 2019 for which Gutierrez received a 10-day suspension from his employment with the Isle of Wight County Sheriff’s Office for his use of force on a suspect accused of driving under the influence.

Three days after the traffic stop, on Dec. 8, 2020, Riddle referred Gutierrez and Crocker for an internal investigation prompted by Nazario’s excessive-force complaint. According to the suit, WPD Lt. G.P. Jernigan and now-retired Sgt. Kenton Givens investigated and found Gutierrez and Crocker had violated department policy with regard to using “escalatory and abusive” language toward Nazario, but ultimately concluded Crocker and Gutierrez were “exonerated” in their use of force.

Riddle, speaking at an April 14, 2021, press conference, said his decision to fire Gutierrez four months after the fact had more to do with video footage of the incident going viral than the incident itself.

“As things continued to unfold, we got to a point Sunday (April 11, 2021) where I lost faith in his ability to continue to serve the community,” Riddle said.

“Dec. 5 did not happen in a vacuum,” Johnson argued. “This is about a town that hired an officer with a record of excessive force, not once but twice,” and “was the result of policies and practices that started at the top.”

Windsor had submitted a Sept. 7 court filing in response to the state’s amended August complaint, contending that “sovereign immunity” makes the town “immune from liability for a police officer’s negligence in the performance of his duties.”

Virginia’s Office of the Attorney General, in a Sept. 22 brief in opposition to the town’s latest filing, argues sovereign immunity only protects Virginia as the “sovereign.” As such, since Virginia has “consented to” the pending state-level lawsuit, Windsor “may not assert immunity against the sovereign that is the very source of the Town’s limited immunity.”

State and local NAACP leaders had called for Riddle’s resignation in April 2021 following the release of the Dec. 5, 2020, video footage.

“We called for his resignation then and after today’s presentation, we continue to call for his resignation,” said Brandon Randleman, the Isle of Wight County NAACP chapter’s advocacy adviser, speaking to The Smithfield Times after the hearing.

Randleman attended the hearing with the Isle of Wight chapter’s immediate past president, Valerie Butler. Both praised Padrick’s ruling and Miyares’ administration for focusing their case on Riddle.

“This shows you that regardless of party that we all are questioning the management style of Chief Riddle,” Randleman said.

Randleman, however, is still calling for a U.S. Department of Justice investigation into “racial implicit bias” within Windsor’s Police Department.

Hampton Commonwealth’s Attorney Anton Bell, who’d been named a special prosecutor for the purpose of examining the Virginia State Police’s investigation of the Nazario incident, said in August that he would not be filing state criminal charges against Crocker or Gutierrez. Bell, however, announced he had asked the U.S. Attorney’s Office for the Eastern District of Virginia to open an investigation into whether Gutierrez’s actions had violated Nazario’s civil rights, specifically federal statute Title 18, Section 242, which makes it a crime for any person acting “under color of law” to “willfully deprive” someone of “rights, privileges, or immunities secured or protected by the Constitution and laws of the U.S.” The law further prohibits federal, state and local officials from willfully subjecting “any person to different punishments, pains, or penalties, than those prescribed for punishment of citizens on account of such person being an alien or by reason of his/her color or race.”

“Even though it was an outgoing Democratic attorney general who actually filed the suit against the town of Windsor, it’s nice to know that the incoming attorney general’s office has at least picked the case up – maybe not race-related but clearly there’s definitely some issues there,” Butler said. “So I think if they delve deep enough they may uncover and agree with us that they are racially motivated.”

Miyares’ administration has requested a jury trial, which Padrick anticipated could occur within the next six months.