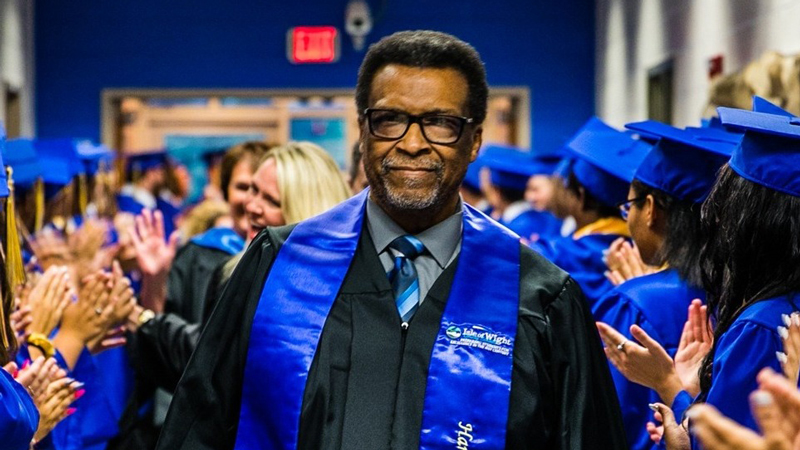 Former Isle of Wight County School Board member Alvin Wilson died Sept. 6 just over a month shy of what would have been his 77th birthday.

Wilson, 76, was born on Oct. 24, 1945, to Joshua and Lillian Bradby Wilson. By 1970, at age 24, he was mentoring children and teenagers in a summer recreation program for area youth at Smithfield Elementary – now known as Westside Elementary.

“He was my first boss when I started teaching at L.P. Jackson (Middle School) in Dendron in 1979. He was a good person to work for. I’m so glad I stopped at the barbershop to see him the last time I was in Smithfield,” said Patricia Rideout, sharing her recollections on Wilson’s online obituary. “He loved to tease me and make me blush. Then he would call me ‘Ms. Redd’ because my face was red.”

Speaking to the Times by phone Sept. 8, Rideout also recalled that he “knew all the children by name” and “knew where they lived,” while serving as director of transportation for the school system.

According to past reporting by the Times, Wilson retired from Surry’s school system in 2003 as assistant superintendent, but went back to work as an assistant principal in Hertford County, North Carolina, from 2003 to 2009. He then returned to the area, substitute teaching for Isle of Wight and Franklin’s schools and filling in as director of Isle of Wight’s alternative school.

Wilson made his first bid for the Hardy seat on Isle of Wight’s School Board in 2013 in the wake of a scandal involving racist emails then-incumbent board member Herb De Groft had sent to county employees. When De Groft withdrew his candidacy for reelection, Wilson faced challenger Tina Hill on the ballot that November, losing to Hill by 53 votes.

Hill, the wife of then-Smithfield High School band director Aaron Hill, ended up resigning her seat a year later to relocate with her husband to Atlanta. Wilson ran again to fill the remainder of Hill’s term, and won.

Wilson served on the School Board from 2015 through his own midterm resignation last October, citing health reasons.

During his six years in office, Wilson “always put the students and the children in the community first,” said School Board Chairwoman Denise Tynes, noting that she’d known Wilson her entire life.

The two had both grown up as products of the Isle of Wight County public school system. Wilson, she recalled, attended Westside while she attended nearby Hardy Elementary. Tynes added that she would regret Wilson’s not being able to attend when the new, larger Hardy Elementary currently under construction adjacent to the 1960s-era school opens in 2023.

“He’s going to be missed in the community, not just as an educator but as a businessman,” Tynes said.

Michael Cunningham, who succeeded Wilson in the Hardy seat last fall, recalls first meeting Wilson upon moving to Smithfield in 1998.

“He actually was my barber,” Cunningham remarked at the board’s Aug. 8 meeting.

Wilson opened the Alvin & Sons barber shop in 1988 in a storefront at Main and Commerce streets that’s now home to Wharf Hill Brewing Co. Wilson later moved the business to its present location on West Main Street, not far from Westside Elementary.

Cunningham and Wilson also attended the same church, Emmanuel Baptist, where Wilson served as a trustee.

“He was there, before he got sick, … almost every Sunday,” Cunningham said.

Wilson’s roots in the county also include a family connection to the late Henry H. Bradby, who in 1974 became the first African American elected to Isle of Wight’s Board of Supervisors.

Isle of Wight County Schools announced on Sept. 7 that a celebration of life service will be held at 2 p.m. on Sept. 11 at Emmanuel Baptist. Wilson’s family will receive guests during a viewing scheduled for Sept. 10, 2-5 p.m. at Shivers Funeral Chapel.