Petition debuts to bring private recycling to Isle of Wight 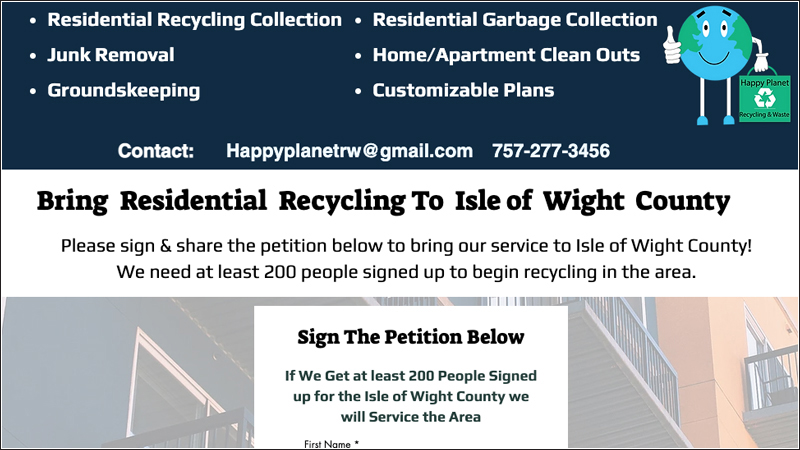 Virginia Beach-based Happy Planet Recycling has launched a petition on its website soliciting signups for private curbside pickup in Isle of Wight County.

As the cutoff date for recycling glass, paper and plastics in Isle of Wight County nears, Virginia Beach-based Happy Planet Recycling is now officially offering to fill the void.

The 2021 startup company has launched a petition on its website, stating Happy Planet will begin servicing the area if at least 200 county residents sign up.

County residents willing to pay for biweekly curbside pickup of commingled recyclables can sign up at www.happyplanetrw.com/preorder-form. The company, according to its website, offers a subscription plan for $15 per month or $165 annually. To add glass, it’s $20 per month or $220 per year.

According to company founder Aaron Brave, the signup form made its debut Sept. 6. There is no deadline to sign up, he said.

Starting Sept. 14, Isle of Wight’s eight municipal refuse and recycling centers will accept only metal cans and “clean” cardboard — no food stains or other residue. County officials contend everything else has been getting incinerated at the Wheelabrator waste-to-energy plant in Portsmouth. In 2018, China banned the import of most overseas recyclables, causing what County Administrator Randy Keaton described in August as a “shift nationwide” in the ability of municipalities to find buyers for their collected recyclables.

Isle of Wight’s recycling reduction comes amid a string of similar actions across Hampton Roads. Smithfield and the city of Franklin both ended their recycling contracts with Bay Disposal in 2021, each also claiming most of their recyclables were being incinerated rather than repurposed. Bay disputed the assertion, claiming the company sends only around 30% of what it collects throughout Hampton Roads to Wheelabrator and the rest to a processing facility. The city of Chesapeake, which Happy Planet is already servicing, followed suit in late June, ending its contract with Bay competitor TFC Recycling.

Happy Planet contracts with Portsmouth-based Recycling & Disposal Solutions to repurpose what its drivers collect. According to RDS, the recyclables are then sold to a variety of buyers.