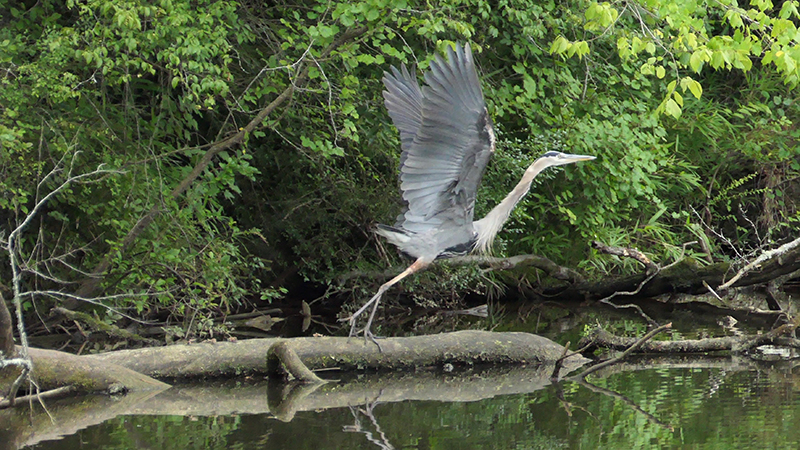 Pictured is one of the great blue herons that RiverGuard Jeff Turner saw on his Aug. 17-19 trip on the Nottoway River below Delaware.

Spirit of Moonpie, Whispering Bear and I spent August the 17th through the 19th on the Nottoway below Delaware. The water was a little murky, stinky and 78 degrees. Air temps ranged from 62 to 85 degrees. It was very nice weather out on the river.

There were still right many dead catfish, however. One we saw was 20 pounds. Also, we saw a dead carp.

Yep, the fishing was still off. Only caught one catfish the first night. Thank you, Jett, for the bait! Oddly the bass fishing was not all that bad. I caught seven without really fishing that much. They were all small, however. Only caught one jack, though, and that was unusual. The bream seemed to be biting pretty good. Whispering Bear caught a couple for catfish bait pretty easily.

The river was still in bad shape. Really stagnant and stunk like dead fish on much of the river. I thought the rain we had would have cleared it out, but I guess not. Maybe after this week it will get better if we get the predicted rainfall for the week of the 22nd.

We didn’t see all that many different critters this trip. Mostly just great blue herons and buzzards. The buzzards were there because of all the dead rotting fish. We saw some hummingbirds, which was cool to see out there. We saw right many muskrats this trip. Also watched a pretty nice-sized copperhead swimming the river. Don’t see that very often.

Trash was extremely light, but we did pull in three limblines set with heavy orange monofilament. No tags of any kind. Also removed a couple big wads of fishing line and a practically brand-new lure from the trees. That just freaks me out that people will leave a $10 lure in the trees along with 50 feet of line.

So yep, there was great weather on this trip. Just need a lot of rain to get that stagnant death water out of the river. I’m really looking forward to cleaner water, living catfish and cooler temps on the two rivers we call the Nottoway and Blackwater.