Frog to be placed in Garris Event Park 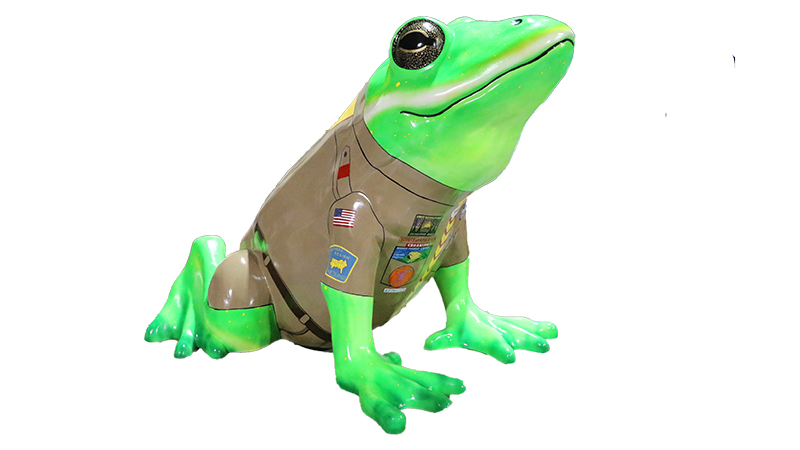 This Windsor-owned frog sculpture had about 10 more hours of work left to be done on it when this photo was taken Aug. 4. The Windsor Town Council voted Aug. 9 to place it at the Wesley F. Garris Event Park. The frog has a Boy Scouts theme.

Featuring a Boy Scouts-themed paint design, this is one of three town-owned frog sculptures fabricated in hand lay up fiberglass by a company called Cowpainters. Each frog is 42 inches high, 42 inches wide, has 45 inches of depth and weighs about 250 pounds.

The sculptures are intended to be emblems for people to recognize the town by and are part of an initiative spearheaded by the Windsor EDA that draws upon the locality’s history of being a popular place for frogs due to the area’s heavy, wet soil.

Councilman Jake Redd, who is a member of the EDA, was not present at the council’s Aug. 9 meeting but asked Windsor Town Manager William Saunders to present the EDA’s recommendations in his stead.

Saunders also shared with council members some photos of the nearly completed Boy Scouts-themed frog sent to him by Redd.

“The EDA has proposed the placement of this frog to be at the Wesley Garris Event Park,” Saunders said. “The two remaining frogs, the farmer frog and the jewel-themed frog, the EDA recommends for the town center and the town property close to Shirley Drive.

“What (Redd) would like tonight is for the Town Council to take a vote on the location for the Boy Scout frog but not necessarily the other two,” Saunders added.

Mayor Glyn T. Willis asked if there were any more questions or comments before the council voted.

“I just think this looks awesome,” Councilman Walter Bernacki said, looking at the Boy Scouts frog in the photos.

Prior to Saunders’ brief presentation, Bernacki passed along some town marketing ideas related to the frogs that his daughter had shared with him.

The first idea involved the digital sign in front of Town Hall at 8 E. Windsor Blvd. Bernacki said his daughter asked if the sign was capable of doing simple animations, like a frog hopping across the screen. If so, she suggested the animation could occur with some level of frequency to get people driving by to wonder about it.

“Maybe it’ll encourage people to look up the town of Windsor,” Bernacki said.

His daughter’s second idea involved geocaching, which is described at adventure.howstuffworks.com as, at its most basic level, a “game where players use GPS receivers to track down a container or cache. Caches may contain any number of small items, or they may only contain a logbook for players to sign to mark their find.”

Bernacki said his daughter knows there is a big community out there that participates in geocaching, and her thought was that with these new frogs being publicly placed, perhaps a cache could be put near the frogs.

He suggested asking some of the businesses in town if they would be willing to place a special offer inside the cache, like Dairy Queen offering a free ice cream treat, for example.

“(Then we could) get a hold of a couple of these geocachers and say, ‘Hey, can you spread the word that this is the coordinates?’” Bernacki said. “And it can start spurring some interest to bring people into town, because they have quite the community that when someone finds a geocache, they always spread the word and everyone wants to come visit it, so hence, maybe a way to try to bring some people into town as well.”

The mayor encouraged Bernacki to pass these ideas along to Redd.