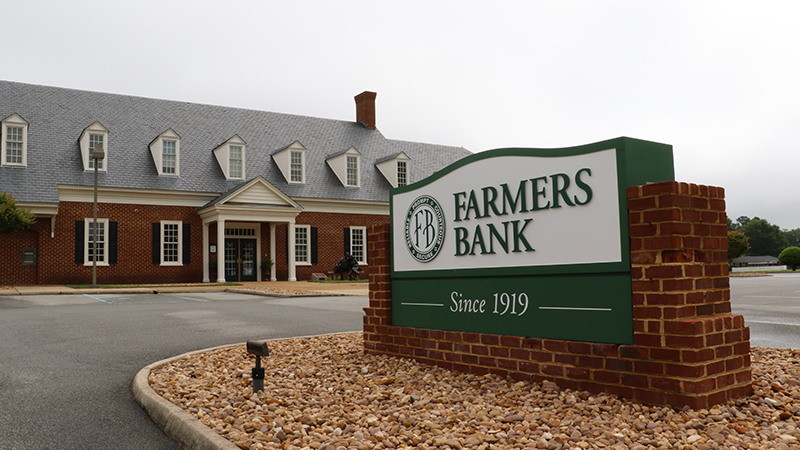 Editor’s note: This story was updated on Aug. 19, 2022 with additional details on the merger.

According to a TowneBank press release, the merger was approved by both companies’ boards of directors. The merger is expected to close in the first quarter of 2023, subject to regulatory approval and the approval of Farmers’ shareholders.

The merger marks the end of an era for the last remaining Isle of Wight County-based bank, founded 103 years ago in Windsor.

The transaction, according to the press release, will “solidify” TowneBank’s No. 1 market share in the Virginia Beach-Norfolk-Newport News metropolitan area, adding Isle of Wight and Southampton counties to the company’s service area while expanding Towne Insurance revenues.

“Our TowneBank family is humbled and excited to join hands with our long-time friends at Farmers,” said G. Robert Aston Jr., executive chairman of TowneBank, via the press release. “We believe our partnership can bring additional products and expanded services to the clients of Farmers Bank while helping our communities grow and prosper.”

According to TowneBank’s press release, Farmers Bank shareholders will receive 0.605 shares of TowneBank common stock for each share of Farmers owned, which “implies a deal value” of $17.82 per share, or approximately $56 million.

“This is a stock-based deal rather than a cash-based deal, meaning that TowneBank is offering up shares in itself in exchange for ownership over Farmers Bank,” explained Dr. Thomas Schneider, a finance professor at Old Dominion University. “In an all-stock deal, no cash changes hands.”

“Instead, each share of FBVA will be exchanged for 0.6050 shares of TOWN,” he added, using the two banks’ over-the-counter stock abbreviations. “According to their recent market values, it works out that TowneBank is giving up about $56 million (in) stock to Farmers Bank’s current shareholders to purchase the bank.”

Aston told The Smithfield Times on Aug. 19 that Farmers Bank offices in Virginia Beach, Chesapeake and the Harbourview area of Suffolk will close and consolidate with nearby TowneBank offices. The remaining Farmers offices, including in Smithfield and Windsor, will eventually be rebranded as TowneBank but remain open. Aston doesn’t anticipate any reduction in personnel.

TowneBank, which operates the fifth largest bank-owned insurance agency in the nation according to Aston, will gain 72% ownership in Manry-Rawls, a Franklin-based insurance company, via the merger.

“That should take our insurance revenue up to somewhere in the neighborhood of $85 to $86 million,” Aston said.

“We feel privileged to partner with our neighbors at TowneBank,” Vernon Towler, chief executive officer of Farmers, said in the press release announcing the sale. “They share with Farmers Bank a commitment to philanthropy and community engagement. TowneBank is an incredibly strong organization.”

The announcement comes in the wake of a months-long power struggle between Farmers’ management and the bank’s former board chairman, Richard “Dick” Holland Jr.

Holland, whose family founded Farmers, was ousted as chairman of Farmers Bankshares’ board in February over a disagreement as to how aggressively to pursue a sale or merger of the company.

Farmers Bankshares’ board had elected William A. Gwaltney Jr. in Holland’s place as chairman in February. Holland had contended in a March 8 letter to shareholders that he’d “lost all confidence” in the current board and believed his investment as one of the bank’s largest shareholders “would be best protected by a sale or merger of the company.”

Towler’s Aug. 18 remarks on the TowneBank merger are a sharp departure from a Feb. 28 shareholders letter he’d signed arguing in favor of the bank “staying independent.” Aston told the Times that the merger had come about at Farmers’ request, with negotiations beginning six to eight weeks ago.

“We were fortunate to be the one that they chose,” Aston said.

According to a May 24 Farmers Bankshares press release, all nine were reelected – albeit with just 37%-40% of the vote. The remaining 59%-62% of votes “were withheld.” All in-person and proxy card votes cast represented roughly 76% of the company’s outstanding shares.

In February, Farmers Bankshares reported record earnings of $8.5 million, or $2.72 per share, in 2021. Holland, however, contended in his letter that this was “significantly driven” by Farmers’ purchase of a majority interest in the Franklin-based Manry Rawls insurance agency during his 1994-2019 tenure as the bank’s CEO, and by a $3.1 million one-time gain from the sale of bank-owned property he’d “shepherded to conclusion in 2021” as chairman, which would “not be repeated in the coming years.” Excluding the Manry Rawls income and the one-time sale revenue, “the picture is bleak,” Holland told shareholders.

In April, Gwaltney and Towler had sent another letter to shareholders contending the bank’s 2021 return on assets was 1.44%, not the 0.5% Holland had claimed. Holland’s numbers, they argued, “leave out important parts of our revenue mix, such as the Manry Rawls insurance business and the Tidewater Home Funding mortgage business,” and were “not calculated in accordance with generally accepted accounting principles.”

“Given the strong ‘withhold’ vote against management at their shareholder meeting, it is not too surprising that we are seeing an acquisition take place. It seems that Mr. Holland’s campaign to sell the bank has succeeded,” Schneider said.

Holland declined to comment on the merger. Gwaltney hasn’t responded to The Smithfield Times’ phone or email requests for comments.