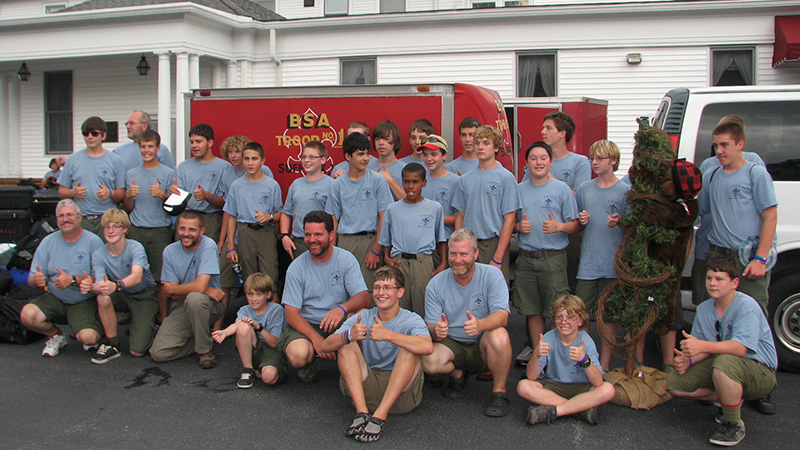 In 2011, Boy Scouts of Troop 1 went on an 8,000-mile trip across America, visiting 21 states and seeing many attractions along the way. They are pictured here on the evening of their return with some of their leaders.

Suffolk’s Boy Scout Troop 1 is planning its centennial celebration for February 2023 and is getting the word out to former Scouts near and far to gauge their interest in attending.

It’s not known how many other troops in the history of Boy Scouts have celebrated their 100th anniversaries, but it’s certainly a rarity. The national Scouting organization itself had its 100th birthday only 12 years ago, and many troops haven’t made it to the century mark.

“I think this will be a meaningful event,” said Robert Baker, a longtime Scoutmaster of Troop 1 and organizer of the event. “Attendees will be able to rekindle experiences they had in Scouts and the friendships they made with the boys they grew up with in Scouting.”

Baker believes between 2,000 to 3,000 boys have participated in Troop 1 throughout its 100-year lifespan.

The troop was organized on Feb. 19, 1923, with 19 charter members. M.A. Elliott was the first Scoutmaster. Troop 1 was the first troop in the Old Dominion Area Council, which in 1992 merged with the Peninsula Council to form the Colonial Virginia Council.

Sixteen of the troop’s 22 Scoutmasters have been members of Main Street United Methodist Church. Troop 1 has awarded 176 Scouts with their Eagle Badges. Scouts from the troop have participated in many National Jamborees over the years, including at Valley Forge, Pennsylvania; Washington, D.C.; Irvine Ranch, California; Colorado Springs, Colorado; and more. They have also attended numerous high adventure bases, Philmont Scout Ranch in New Mexico, leadership conferences and more.

Many Eagle projects originating from the troop can still be seen around town. Troop 1 Scouts also serve their community at local cemeteries placing flags for Memorial Day and Veterans Day and wreaths at Christmastime.

Baker said letters have gone out to Eagle Scouts, as well as some other local Scouts whose addresses he could find. However, any current or former Troop 1 Scout is invited, and those who wish to attend should notify Baker as soon as possible, but no later than Nov. 1.

The celebration will take place Feb. 25-26, 2023. A banquet is planned for Saturday night, and participants will attend the Scout Sunday service at Main Street United Methodist Church. It’s hoped that new Troop 1 Eagle Scouts will be able to have their court of honor during this celebration.

Reservations and the purchase of special patches, neckerchiefs and ball caps can be arranged by emailing mainstreetboyscout@gmail.com, finding Troop 1 Centennial Celebration on Facebook or writing to Baker at PO Box 1639, Suffolk, VA 23439. Scouts are asked to spread the word to any other Troop 1 Scouts they know.