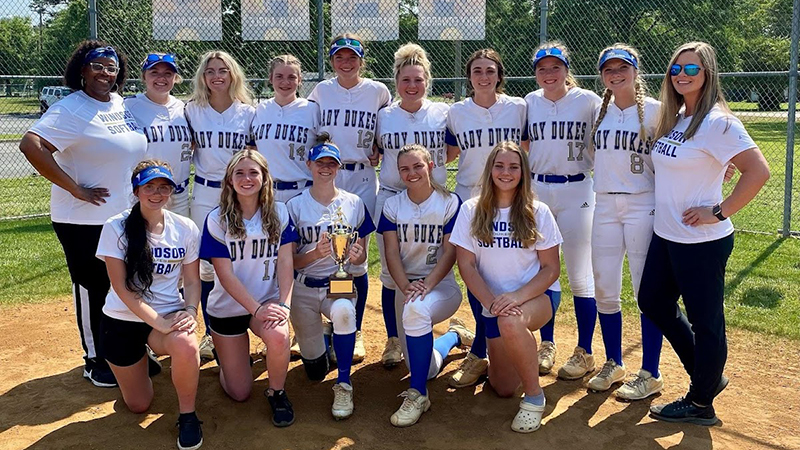 When senior Maja Angle was asked this year when the last time was that she played a full softball season at Windsor High School, her response was 2019, her freshman year. Although COVID-19 cut the 2020 season short, the program has continued to maintain a competitive reputation.

“This year we aren’t faced with those restrictions, and it’s such a relief,” Windsor Assistant Coach Karissa Crowder said, referencing the 2022 season. “After years of watching the program grow, it’s rewarding to see this team’s hard work bring such success.”

The Windsor High School varsity softball team finished its 2022 campaign with an overall record of 17-3.

After earning the No. 2 seed in the Region 2A Tournament and a first-round bye, Windsor took on No. 10 Nottoway High School in the quarterfinals and fell narrowly, 4-2, on Monday, May 30. The Lady Cougars went on to defeat No. 6 Nandua High School 7-6 in the semifinals, and they were set to play No. 1 Randolph-Henry High School for the championship on Thursday, June 2.

Windsor dominated the Tri-Rivers District this year, winning its third consecutive regular season district title. This 2022 dominance was reflected when the all-district honors were handed out.

Fowler, who made the all-district first team as both an outfielder and pitcher, was joined on that team by the following Windsor teammates: junior Melissa Carr, as a catcher; junior Sara Brooks, as a second baseman; and Angle, as a designated player/flex player.

“The girls have worked hard to maintain an undefeated record in the district,” Crowder said.

Windsor Head Coach Sherry Ashburn noted that it was a great honor to coach the 2022 Lady Dukes.

“To see them come out with the spirit to win and the mindset to push through has been rewarding,” she said.

Ashburn said, “The team was led by three captains: Maja Angle, Melissa Carr and Madison Lowe, and within this group of ladies you will find passion for the game of softball, talent, ability to take direction, consistency and a sense of care which allows them to have the core value of the team at heart.”

The Windsor softball team should have a strong group of returners next year, with six players who will be seniors. This year’s team says farewell to three seniors — Angle, Emily Edwards and Lowe.