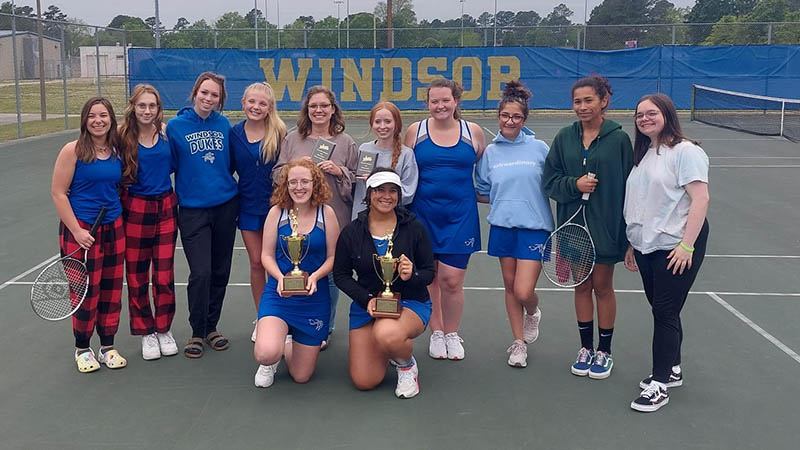 The recent history of the Windsor High School varsity girls tennis program has been stellar, and the 2022 team wrote the next chapter of that legacy.

The Lady Dukes won the 2022 Tri-Rivers District regular season and tournament championships, entering the Region 2A Tournament with a 12-3 overall record.

Though No. 3 Windsor fell 5-1 to host No. 2 Poquoson High School on Wednesday, May 25, in the regional semifinals, the season is more likely to be remembered for the overwhelming team and individual success the Lady Dukes experienced during the course of the year.

Windsor recorded no less than 10 shutout victories — five at home and five on the road — on its way to winning the district titles.

“The joy overcame me as the team won these titles,” Lady Dukes Head Coach Sherry Garris said. “Their hard work and efforts came to light on the courts and paid off with these amazing wins. I was very proud of the team as a whole.”

She noted that her team’s players displayed top-notch sportsmanship and positive attitudes on the courts both with each other and with their district opponents this season.

“It is the greatest moment as a coach when opposing players talk, laugh and get to know each other on the court,” she said. “It makes the sport fun, not just a competition among rivals.”

Garris reemphasized her pride in the team members and then spoke more about the effort they applied on the court.

“Each player worked hard in singles, then came together with their doubles partner and won both the district championship and the district tournament championship titles,” she said. “I have to give a shoutout to our team of winners: Pearl Anderson, Kaydence Delgado, Alivia Garris, Jenna Garris, Mackenzie Powers, Avery Rose, Kylie Sharpe, Nadia Smith, Alexis Watkins, Maddison Zephir and our manager, Mackenzie Burns.”

Coach Garris said the key to the Lady Dukes’ success this season was their sense of family.

“The ladies treat each other like sisters and are open and honest with one another,” she said. “The team is close knit and supportive of each other. We come together as a team, we communicate openly, and we play tennis. We are a great example of the Windsor Way.”

The Windsor varsity girls tennis team won the district regular season and tournament titles in 2018 and 2019, also finishing as the Region 1A runner-up in ’19. There was no season in 2020 due to the COVID-19 pandemic, but the Lady Dukes came roaring back in 2021, going undefeated in the district for the year, though no trophies were given that season for district champion status.

Helping drive the success of Windsor’s team in 2022 was senior Alivia Garris, who Coach Garris said was the captain and the leader for the Lady Dukes this year.

“She is our first-seed player and is always willing to accept a challenge from anyone on the team,” the coach said. “Her attitude toward the sport is positive and her confidence is beyond measure. The other players realize and respect her strength on the court. As a senior, she wants to return next season to continue helping the team improve and achieve their best.”

Alivia ended her senior season undefeated in the regular season with a 14-0 record in singles and 11-1 record in doubles with her partner and sister, Jenna Garris, the coach said, adding that Alivia was voted the Tri-Rivers District Player of the Year.

Both Alivia and Jenna were named to the 2022 Tri-Rivers All-District First Team.

In doubles, Alivia and Jenna were the No. 3-seeded regional doubles team and ended the tournament as semifinalists.

“Both ladies demonstrate strong skill on the court and have a great future ahead,” Coach Garris said. “It is fitting to say that these two ladies are part of a phenomenal team.”

The coach said it is also important to mention Smith and Watkins as being the No. 8-seeded regional doubles team going into the Region 2A Tournament.

“Without each player, the team would not have ended the season so well with an overall undefeated 11-0 district record,” Coach Garris said. “In tennis, your team is only as strong as its weakest player, and our players show their strengths in their own ways and make it happen on the court. I am so proud of each player and look forward to a great season next year.

“I am proud to be their coach and blessed to receive the Tri-Rivers District Coach of the Year award.”