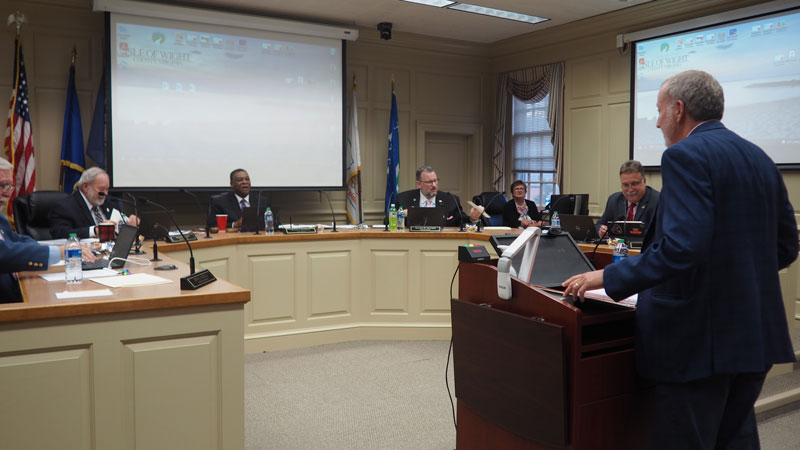 IWCS Superintendent Dr. Jim Thornton asked the supervisors to restore funding after they voted on May 12 to "set aside" $1.5 million earmarked for the county's school system. Stephen Faleski | The Smithfield Times

IW supervisors revote on ‘set aside’ $1.5M after pushback

A week after voting to “set aside” $1.5 million in local school funding, Isle of Wight’s supervisors revoted May 19 to return just under half that amount to the county’s school system.

The supervisors had approved the county’s $88.9 million 2022-23 budget, with the last-minute $1.5 million reduction on May 12, prompting pushback from Superintendent Dr. Jim Thornton and members of Isle of Wight’s School Board.

Thornton told the School Board at its May 18 meeting that he’d been expecting to see that figure reduced by $393,000 per a conversation he’d had with Keaton, but the additional $1.5 million reduction came as “quite a shock.”

IWCS expects to carry over $2.5 million in unspent federal pandemic aid into the 2022-23 school year, and is also expecting upward of $7 million in additional state funding. The majority of the additional state funding, according to Thornton, is tied to a provision in former Gov. Ralph Northam’s proposed 2022-24 state budget that would give teachers annual 5% raises.

“I see it as a win-win,” McCarty said, noting the distinction between his “set aside” motion and outright cutting the school system’s funding.

But IWCS, whose School Board had already voted to approve a new pay scale reflecting the 5% average raise, didn’t see it that way. The school system posted to its Facebook page May 17 that the “set aside” would have created “numerous issues.”

“The majority of school hiring occurs over the next two months,” the IWCS post states. “Plus, there is an agreement with area divisions to not hire staff from each other after June 30. Even if the ‘set-aside’ funding is approved this summer, IWCS will be at a serious disadvantage if hiring is delayed.”

In addition to not hiring new positions, IWCS would have needed to “cut approximately 15 employees to make up for this reduction,” the post continues.

“I believe the majority of the Board of Supervisors did not understand all the ramifications of putting the money aside,” Thornton said, blaming the unexpected reduction on pressure from opponents of “CRT and divisive materials.”

For nearly a year, a vocal group of county residents has accused Thornton of bringing tenets of Critical Race Theory into the school system through diversity, equity and inclusion initiatives. The graduate-level academic discipline, often abbreviated CRT, argues American laws and institutions have perpetuated inequalities among minority groups.

Though Thornton has repeatedly denied CRT is being taught at the K-12 level in Isle of Wight County Schools, critics have held up Smithfield High School’s “Read Woke” challenge as an example of its influence. Opponents of the challenge, which involves encouraging students to read social justice-themed books available at the school’s library, argued in a letter to Thornton last year that the books, in their opinion, were “designed to instill the feeling of discomfort and guilt upon white children” and “rage in black children.” On his first day in office in January, Gov. Glenn Youngkin signed an executive order mandating an end to “inherently divisive concepts, including Critical Race Theory” in Virginia’s schools.

McCarty did not reference CRT among his reasons for making his May 12 motion, stating only that the county had found itself in “interesting political crosswinds.” He then clarified at the supervisors’ May 19 meeting that his remark had been in regards to the ongoing state budget negotiations between the Senate and House of Delegates.

But at the April meeting where Grice first proposed the $1.5 million reduction, Supervisor Don Rosie asked Thornton to state his “position on diversity, inclusion and equity” and whether he believed such a focus was in keeping with Youngkin’s order. Rosie then suggested the supervisors could increase the school system’s budget “as it aligns itself with state policies and directives.”

“These citizens have a right to their viewpoint, but our teachers are teaching the Virginia Standards of Learning, not CRT, and his reasons are all about politics,” Thornton said of Rosie.

According to Thornton, one prospective new hire, after watching the May 12 vote, had already “contacted his principal to see if he should stay in his current division and not come to IWCS.”

“I can’t sign a contract, and you can’t give a contract to someone knowing that the money may or may not be there; that’s called malfeasance,” Thornton said.

Ahead of the May 19 revote, a number of residents spoke during the meeting’s public comment period, some urging the supervisors to stay the course with the $1.5 million reduction, others urging them to restore the funding.

“The law requires the county to allocate $13.8 million to the school system in addition to state funds; you all approved … 74% above what the state required you to approve, so some of the criticism you’re getting I really don’t understand,” said Carrsville-area resident Volpe Boykin.

State funding pays for 522 of Isle of Wight County Schools’ 736 employees. According to Thornton, every area public school system, not just Isle of Wight, funds well in excess of the minimum required local match to make up the difference.

“I want to start by commending this board for questioning, and analyzing, and reducing the school budget. … Me, and handful of other concerned parents have been very vocal critics against the school administration’s efforts to force social/emotional learning and tenets of Critical Race Theory under the cloak of equity,” said Jason Maresh, a Windsor parent running for one of the available seats on Isle of Wight’s School Board this November. “Those of us that have been vocal critics, we’ve been labeled racists … these are ridiculous, fallacious accusations. It should be all of our goals to ensure all of our students get the highest quality of education we can provide, without having to focus on social justice issues.”

“The cut in the budget has absolutely nothing to do with ‘accountability,” countered the Rev. Willie Williams. “The School Board is currently made up of a majority of people of color. … It’s all about an effort to stop America from browning.”

“The proposed cuts to the school budget will cut deeply, like an injury that continues to bleed,” said Martha Jackson. “From what I can ascertain, there is an underlying reason and I think each of you need to look inside yourself, and cogitate what it is, and dismiss it.”

Thornton then told the supervisors he would be able to avoid layoffs and hire all needed positions if $760,000 of the cut funding were restored. The supervisors voted unanimously to do so.

According to IWCS spokeswoman Lynn Briggs, the restored funding is sufficient to include the new testing coordinators.