Inmates get a second chance at education 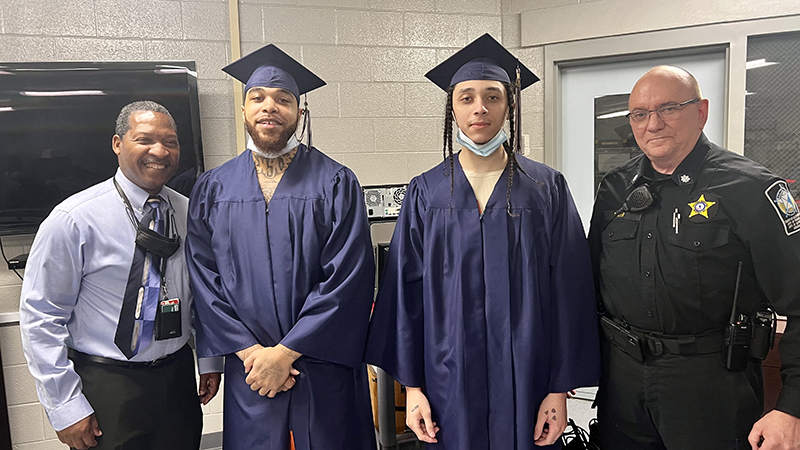 This is the first time the ceremony has been held since before the COVID-10 pandemic, but it is usually held two or three times a year. During the pandemic, four other inmates passed the GED test, though the jail was unable to host the ceremony.

“These celebration ceremonies are my favorite,” said teacher Marie Evans. “It’s just so rewarding to see them do something good that they can be proud of.”

The graduates were given a cap and gown to wear during the ceremony, in which they walked in with “pomp and circumstance.” Each gave a speech highlighting what the accomplishment meant to them.

“We want to make them feel special because it is a special accomplishment that they missed out on in high school,” said Evans. “It is something to be proud of because it’s not always easy. It’s loud in the jail and they get moved around a lot. It can be hard to study and focus on the work and passing the test.”

Brendelson, who was supposed to graduate high school in 2021 until he was incarcerated, said he was doing this for himself because he didn’t want to just be a high school dropout.

“I hope that this inspires my younger brother and sisters to stay in school and get their diplomas too,” he said.

Carr is happy to be recognized for something positive.

“I’ve done some negative things, but I’m proud to do something positive now,” he said. “I am also hoping that this will open doors for me educationally and give me more job opportunities when I get out.”

Those at the Western Tidewater Regional Jail value rehabilitation within their programs and hope that inmates will return to society better than they were when they were incarcerated, which was highlighted in the speech that deputy superintendent Ernie Bower gave at the celebration.

The General Educational Development program partners with The College and Career Academy at Pruden to offer courses in which teachers work one-on-one with the inmates to help them pass the GED test.

These teachers, along with administrators and officers at the jail, attended the ceremony and congratulated the graduates.

“These guys have inspired and motivated other inmates to join the GED program,” said Ronnie Sharpe, the director of education. “I have been bombarded with requests because they’ve heard about what these guys have done.”