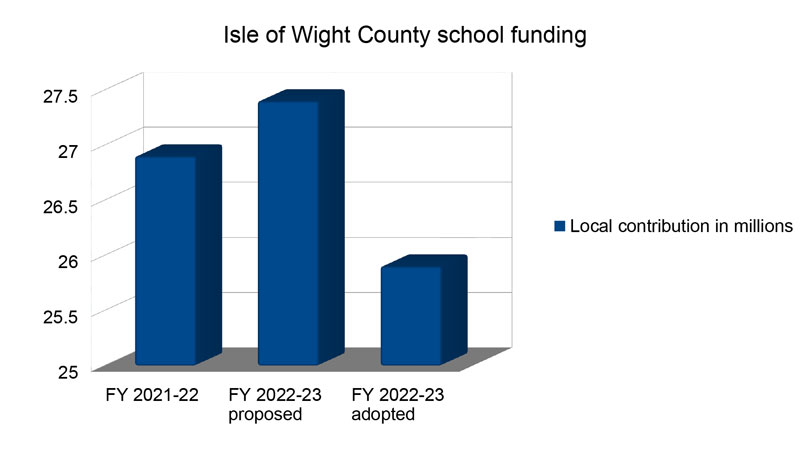 County Administrator Randy Keaton had proposed restoring $527,000 Isle of Wight's supervisors had cut from its local contribution to Isle of Wight County Schools last year, but the supervisors instead voted to further reduce the school system's allocation by setting aside just over $1.5 million.

Isle of Wight supervisors have approved the county’s $88.9 million 2022-23 budget and tax rates — with one significant change.

Per the supervisors’ unanimous May 12 vote, the adopted budget reduces the county’s contribution to its school system by just over $1.5 million and reallocates the money to the county’s “contingency” funding.

County Administrator Randy Keaton had initially proposed $27.2 million to Isle of Wight County Schools. The nearly $527,000 increase would have undone a roughly $500,000 reduction in local funding the supervisors imposed on the school system in 2021. IWCS had planned to use the restored funding to hire several testing coordinators, which school officials say would have freed up guidance counselors to spend more time working with students, and less time proctoring Virginia’s Standards of Learning tests.

IWCS expects to carry over $2.5 million in unspent federal pandemic aid into the 2022-23 school year, and is also expecting upward of $7 million in additional state funding. The majority of the additional state funding, according to Superintendent Dr. Jim Thornton, is tied to a provision in former Gov. Ralph Northam’s proposed 2022-24 state budget that would give teachers annual 5% raises.

According to Grice, the difference in funding IWCS would receive under the dueling House and Senate proposals amounts to roughly $1.5 million.

“We are in interesting political crosswinds right now,” added McCarty, who said he’d talked to people on “both sides of the political spectrum” in agreement with his “set aside” proposal.

The school system routinely requests appropriations from the supervisors for capital funds and grants through correspondence from the superintendent or finance staff outlining the amount of funding requested and its intended purpose, Assistant County Administrator Don Robertson said, adding it is “likely that a request for a transfer from Contingency could be handled the same way.”

But IWCS, whose School Board had already voted that same evening to approve a new pay scale reflecting the 5% average raise, didn’t see it that way.

The school system posted to its Facebook page May 17 that the “set aside” creates “numerous issues.”

“The school division cannot hire positions without funding,” the post states. “Promised funding is not actual funding. We can only work with the dollars we have been allocated. Therefore, no new positions, including classroom teachers and testing facilitators, can be hired.”

While the supervisors plan to revisit the issue once a finalized state budget is passed, “The majority of school hiring occurs over the next two months,” the IWCS post states. “Plus, there is an agreement with area divisions to not hire staff from each other after June 30. Even if the ‘set-aside’ funding is approved this summer, IWCS will be at a serious disadvantage if hiring is delayed.”

In addition to not hiring the new positions, IWCS “will need to cut approximately 15 employees to make up for this reduction,” the post continues. “Contracts, which were scheduled to be distributed this week, will be held until the division can identify the positions and people who will not be asked to return to IWCS for the upcoming school year.”