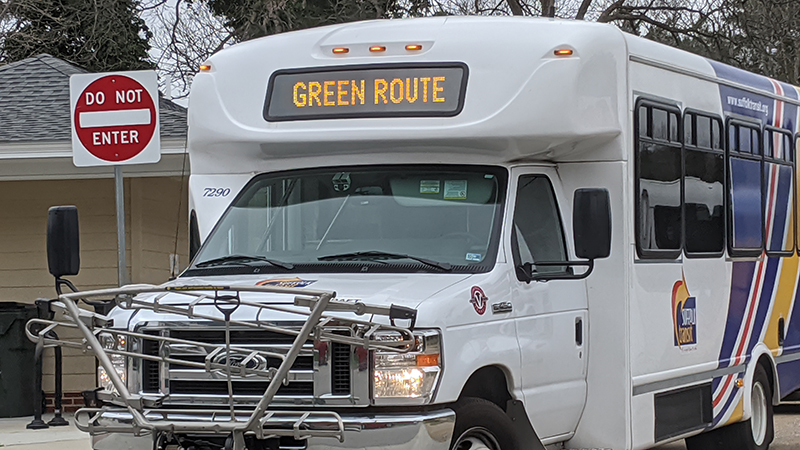 Windsor residents could someday take the bus to get to Suffolk, but it likely is more than two years away, according to Suffolk Transit’s manager.

As part of a plan to fine-tune service in the city and extend it into areas bordering Suffolk, Maria Ptakowski said city and Isle of Wight County officials would put together a joint application this summer for SmartScale money from the Virginia Department of Transportation similar to what Suffolk and Portsmouth have already done successfully for a route to go from Victory Crossing, a hub for Hampton Roads Transit in Portsmouth, to Suffolk’s industrial park area. That funding has been approved for fiscal year 2026.

A proposed Suffolk-to-Windsor bus route would provide service from the Downtown Transfer Station to the Windsor public library, with stops at Sentara Obici Hospital and the Shirley T. Holland Industrial Park in Isle of Wight County. The 1-hour round-trip route could also include building a park-and-ride area in Windsor with one to five designated spaces.

“This will allow us to create … more of a connection between some of these outlying areas that the city of Suffolk is very close to that a lot of people are trying to go to and from,” Ptakowski said.

Plans for a Windsor-to-Suffolk route were previously discussed at a 2020 meeting of the Hampton Roads Transportation Planning Organization. Then Suffolk Public Works Director L.J. Hansen said Suffolk Transit was looking to make more connections with regional partners and expand service to more areas in the city and in Windsor.

The strategic plan estimated daily operating costs in 2019 dollars for a Windsor commuter route to be $252 and capital costs at $81,000 for one van

It also noted the need for collaboration with the town of Windsor and raised the possibility of using the Food Lion grocery store on Windsor Boulevard as a possible park-and-ride spot, but at that time, no one had coordinated with store management on that. It also raised the possibility of other stops such as the Twin Ponds mobile home community and Windsor Manor Park.

SmartScale is a VDOT formula to evaluate the cost versus the benefit of proposed transportation improvements, with approved public transit projects receiving 80% state money and a 20% local match, which the county would split with Suffolk.

Applications are due this summer, and by January 2023, projects will be formally evaluated and by next March or April, public hearings will be held to get input, with the Commonwealth Transportation Board adopting a final six-year improvement plan two to three months later.

Suffolk is also looking to alter routes and service within the city in an effort to have more direct routes and eliminate time at railroad crossings, as well as extend Saturday service. Suffolk Transit is in the midst of a survey to explore what future service improvements residents want to see, including the addition of Sunday service.

“If funding is available, it’s always possible we could do it before that, but it would take a little bit (of time) because we’d have to figure out the best way to design the route too to make sure we’re doing all the service that needs to happen on a Sunday,” Ptakowski said. “FY ’24 would be the latest that I would try to attempt that.”

Suffolk Transit is also in the early stages of looking at what the transportation needs are in villages such as Chuckatuck and Holland.

“We’re going to make sure that when we create an on-demand zone, which will be a scheduled ride that’ll take you from point A to point B,” Ptakowski said, “that we’re going to create it in the correct areas and make sure that we’re taking them to the correct destinations. We don’t want to create a system and then it doesn’t actually help anybody.”

A public hearing before Suffolk City Council would be needed before any changes could be made.