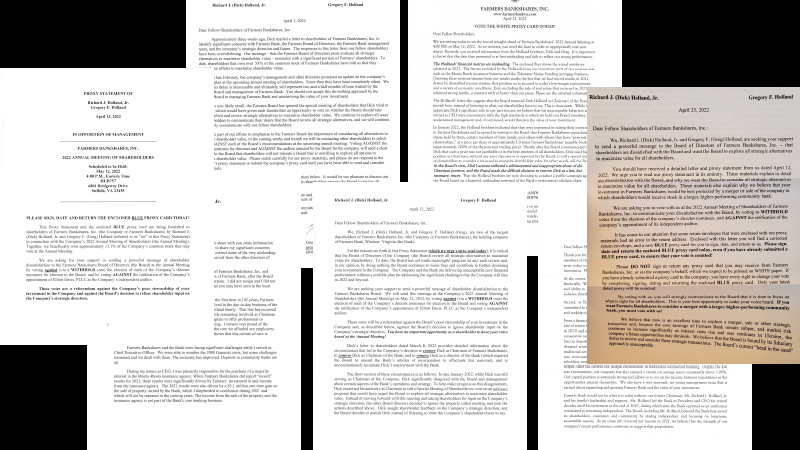 Disagreement over how aggressively to pursue a sale or merger led to the ouster of Farmers Bank Chairman Richard J. “Dick” Holland Jr. and touched off a monthslong power struggle that could culminate at Thursday’s annual shareholders meeting.

The bank’s board and management publicly acknowledged the controversy last week for the first time in a press release in which President and Chief Executive Officer Vernon M. Towler blamed the “ongoing dispute” with Holland for increased operating expenses in the first quarter compared to a year ago, and called the controversy “a distraction for our management team and employees.”

The feud has played out in a series of dueling letters to shareholders ahead of their annual meeting, where Holland has lobbied fellow shareholders to reject a slate of incumbent directors. The letters, obtained exclusively by The Smithfield Times, have become increasingly pointed, with the board and management accusing Holland of spreading “propaganda” and Holland saying that he’s “lost all confidence” in the current management.

The Windsor-based bank — which Holland’s grandfather Shirley T. Holland founded in 1919 — announced in a Feb. 15 press release that the Board of Directors for its publicly traded holding company, Farmers Bankshares Inc., had elected William A. Gwaltney Jr. in Holland Jr.’s place as chairman of the board.

Holland Jr., who initially declined to comment on the circumstances of his departure, stated in a Feb. 25 letter to The Smithfield Times that the bank’s management and board “took action to remove” him. One of Farmers Bankshares’ largest shareholders, Holland remains a director of the holding company but was ousted entirely from the bank-level board, where he contends roughly 95% of the bank’s business is conducted.

An April 25 shareholder letter — signed by Gwaltney and Towler — said the board made “the difficult decision to remove Dick as a last, but necessary, resort.” Holland had previously written to shareholders on March 8, informing them he’d been ousted from his leadership role on Feb. 10 after using his authority to call a special Jan. 31 shareholders meeting to discuss a resolution in favor of exploring the “merger, consolidation, sale or other business combination” of Farmers Bank, and engaging a “nationally recognized investment bank with experience in financial institution merger transactions to assist in such a process.”

“The Board did not feel it was necessary or appropriate to allocate time or resources to a shareholder meeting so close to our already scheduled annual meeting,” DeJarnette told The Smithfield Times in a May 6 email.

‘The picture is bleak’

In a February press release, Farmers Bankshares reported record earnings of $8.5 million, or $2.72 per share, in 2021. Holland, however, wrote in his March 8 letter that this was “significantly driven” by Farmers’ purchase of a majority interest in Franklin-based Manry Rawls insurance agency during his 1994-2019 tenure as the bank’s CEO, and by a $3.1 million one-time gain from the sale of bank-owned property he “shepherded to conclusion during 2021” as chairman and “will not be repeated in the coming years.”

Excluding the income from Manry Rawls, which Holland contends is not part of Farmers’ “core banking business,” and the one-time sale revenue, “the picture is bleak,” he told shareholders.

The core bank’s return on average assets, Holland contended, is approximately 0.5%, though its peers earn nearly double. The bank’s loan-to-deposit ratio, he added, was the fourth lowest in Virginia at 49%, while the state average is 72%.

“I have lost all confidence in the current Board of Directors and management to address these challenges. … As the largest shareholder of Farmers Bankshares, Inc., I believe that my investment would be best protected by a sale or merger of the company,” Holland wrote to shareholders.

DeJarnette countered that the bank’s recent performance merits the continued confidence of shareholders.

“We are committed to driving long-term shareholder value, and we think shareholders should be pleased with our results,” she said in an email to the Times. “Shareholders have benefitted from our record results and strong strategy through dividends and share price appreciation, although the share price can fluctuate based on factors in the market beyond our control.”

A May 4 press release about first-quarter results sounded a similar theme, even while noting the dispute with Holland as a drag on profitability.

“As expected, going into 2022, with the increase in market rates, Farmers’ share of our mortgage subsidiary’s income was decreased by 134.2%,” or $138,000, the press release states. It further contends the bank has spent roughly $186,000 in pretax, legal and advisory fees related to the ongoing dispute, and “compensation expenses paid to former employees, including former Chairman Dick Holland.”

Holland’s March 8 letter referenced a Feb. 28 letter Farmers Bankshares’ 13 other board members sent to shareholders. The Feb. 28 letter states that the bank’s “credit culture has remained disciplined,” and acknowledged that this had “led to a loan to deposit ratio that is lower than peer,” but contended this also affords the bank the ability to “grow organically when loan demand returns in our local markets” and argues in favor of the bank “staying independent.”

“We currently are working with a financial advisor to perform a 360-degree review to help us evaluate all possible business operating scenarios, as many financial institutions do on a regular basis as part of their strategic planning. … We believe that it is in the best interest of the company to complete that review before we can make an informed decision regarding the advisory resolution requested by Mr. Holland,” the Feb. 28 letter states.

In their dueling letters between February and now, the two sides’ criticism of each other has sharpened.

Gwaltney’s and Towler’s April 25 letter characterized Holland’s use of his authority to call the Jan. 31 special shareholders meeting as a “self-interested and inappropriate abuse of the Chairman position” allegedly motivated by Holland’s and his brother, Richmond attorney Greg Holland’s, desire to sell their shares.

“While we appreciate Dick’s significant role in our past success, we believe that his unacceptable behaviors after he retired as CEO were inconsistent with the highest standards to which we hold our board members, undermined management and, if continued, would threaten the value of your investment,” the April 25 letter states. “In January 2022, the Holland brothers indicated that they were interested in exiting their investment in Farmers Bankshares and proposed in writing to the Board that Farmers Bankshares repurchase shares held by them, certain members of their family, and others with whom they have ‘personal relationships,’” at a price-per-share of “approximately 200% of the then-current trading price.”

“Shortly after the Board communicated to Dick that such a price was not justifiable or in the best interests of all shareholders,” the April 25 letter continues, “Dick used his then-position as Chairman, without any prior discussion or approval by the Board, to call a special meeting to consider a proposal to … sell the Bank.”

The bank’s board had previously referenced Holland Jr.’s intention to sell his shares in its Feb. 28 letter, which stated only that Holland had asked for a “significant premium over the current trading price.”

Holland, in his March 8 letter, characterized the Feb. 28 letter as telling only “half the story” as to the proposed repurchasing of his stock.

“I was the one who terminated discussions with Farmers about this transaction,” Holland wrote. “I grew significantly concerned that the Bank would suffer following that transaction. To be clear — I am only interested in transactions that will treat all shareholders equally, and am not willing to leave any of my fellow shareholders behind.”

The Holland brothers wrote another letter to shareholders on April 12 in which they characterized the bank’s “360-degree review” as an “attempt to explain away poor performance,” and urged shareholders to sign, date and return a blue proxy card to “send a powerful message” at the board’s shareholders meeting this week.

“Your votes to withhold approval from the company’s director nominees, and your votes against ratifying the company’s auditor, will strongly communicate to the Farmers Bankshares Board that its ‘head in the sand’ approach to corporate governance will not be tolerated, and that it is time to focus on what is best and right for shareholders,” the brothers wrote.

Gwaltney and Towler sent their own letter to shareholders on April 25, urging them to discard the Hollands’ blue proxy card and instead sign, date and return a white card to stand with the bank’s current management and reelect the current directors. In it, they contend the bank’s 2021 return on assets was 1.44%, not the 0.5% Holland had claimed. Further, the Hollands’ numbers “leave out important parts of our revenue mix, such as the Manry Rawls insurance business and the Tidewater Home Funding mortgage business,” and were “not calculated in accordance with generally accepted accounting principles.”

Even without the one-time real estate sale, the return on assets would be 1.02%, Gwaltney and Towler wrote.

Dr. Thomas Schneider, a finance professor at Old Dominion University, told The Smithfield Times that proxy voting ​​”is a bit like using an absentee ballot, except instead of selecting the candidates yourself, you are appointing someone else to vote your shares for you.”

Under current rules, Schneider said, the company and Holland “each send their own proxy card” and shareholders will “return only the card they support, thereby appointing either management or (Holland) to vote on their behalf.”

DeJarnette declined to “speculate on the outcome of the vote,” or what will happen should Holland be successful in defeating the slate of incumbent directors. In an April 1 letter to shareholders, the Holland brothers said “shareholders that own over 58% of the common stock of Farmers Bankshares have told us that they support our efforts to maximize shareholder value.”

Both sides have told shareholders who’ve already voted that they can change their vote by mailing in a new proxy card, noting that the most recent card will be counted.

Schneider said that Holland could be “attempting to get the attention of a potential acquirer rather than regain his seat on the (bank-level) board.”

“A strong ‘withhold’ vote would send a message to potential acquirers that the current shareholders are ready to sell, even though the vote would not alter the board composition as proposed by management,” he said.

But he didn’t say whether he agreed with the company or Holland that Farmers Bankshares’ stock fluctuations were or were not “meaningful.”

“Many of the fluctuations in FBVA’s stock price over the past five years seem to line up with movements in major banking indexes,” Schneider said, using Farmers Bankshares’ over-the-counter stock abbreviation. “Shareholders care about a stock’s total return, which includes both dividend payments and capital gains. As a tightly-held company that trades over-the-counter, FBVA is susceptible to large price swings when shares change hands.”

According to DeJarnette, all votes cast on either proxy card will be tabulated and reviewed by an independent inspector of elections.

“We urge all shareholders to participate in the vote,” she said. “The inspector of elections will take the necessary time to tabulate votes, which may mean that results will not be known for a few days after the meeting.”

“Only shareholders on record as of March 15, 2022 will be admitted into the meeting,” she added.  “A valid ID or proxy card, depending on ownership status, will be required to ensure the votes are tabulated accurately.”