Frog dedication set for May 1 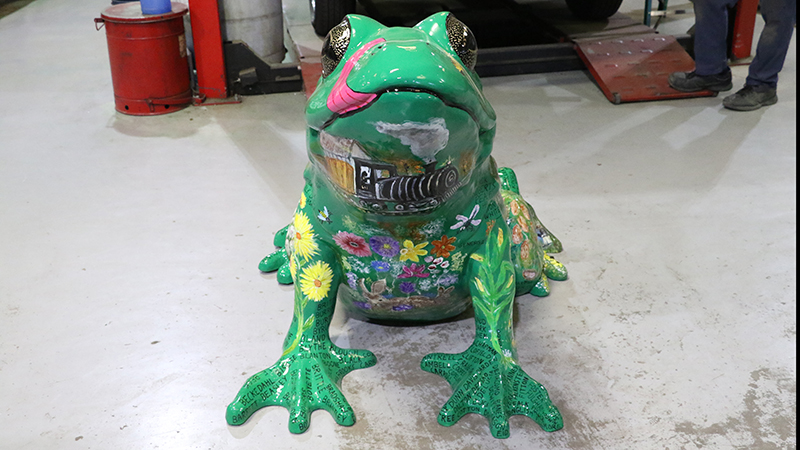 This frog sculpture, an emblem of Windsor purchased, painted and named Jeremiah by the Windsor Congregational Christian Church, will be dedicated Sunday, May 1, at 4 p.m. at the church.

The Windsor Planning Commission discussed at its Wednesday, April 27, meeting possible locations for frog sculptures that are designed to help represent the town, which was once nicknamed “Frog Level,” and specific details of the first sculpture’s dedication were stated.

Planning Commission Vice Chairman George Stubbs announced that the dedication for the first frog will take place Sunday, May 1, at 4 p.m. at the Windsor Congregational Christian Church, which is located at 4 N. Court St.

This frog was purchased by the church. Hannah Wise Holland, who teaches the church’s art class, came up with the overall paint design.

Stubbs said, “It’s very impressive, I’ll have to add, because it’s unbelievable the amount of time that these people have put into the way the schemes are on (it) and the way it’s painted. You’ll have to see it to believe it.”

Seven different artists were involved in the painting process, working on it for six months.

Commissioner Dale Scott said, “A lot of talent went behind painting that.”

Scott then provided some details on possible locations of the three town-purchased frog sculptures that are expected to be painted and placed later this year.

He said one location that has been discussed by the Windsor Economic Development Authority is in front of the Windsor Town Center. Another location is the vacant lot on the corner of Shirley Drive and Windsor Boulevard away from the police station.

There has been discussion about placing a frog in front of the Windsor Ruritan Club, he added.

Scott also noted that there is interest from other organizations.

“I think you’re going to see, in my opinion, (that) once the first frog arrives, other interest will probably leap from there,” he said.