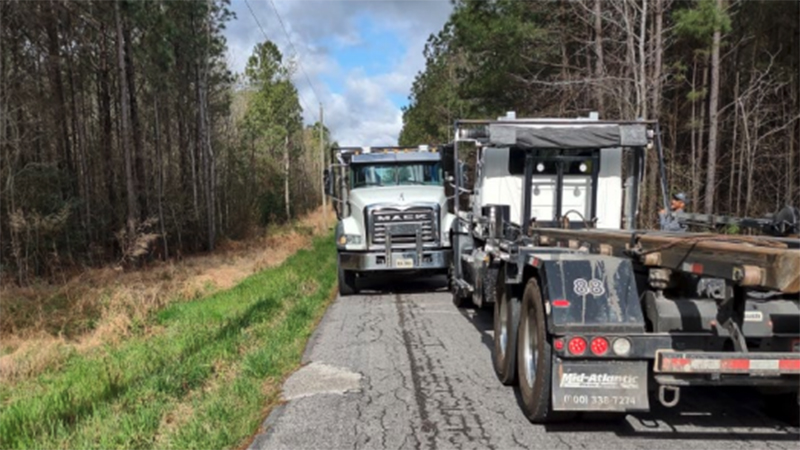 Suffolk planning commissioners unanimously voted against recommending a conditional use permit to allow for two borrow pits in Chuckatuck near the Isle of Wight County line, with those living near the proposed site citing safety issues with the roads leading into and out of it as a primary concern.

Following an April 19 public hearing in which all but those representing the proposed borrow pit spoke against it, commissioners deliberated briefly before making their recommendation. City Council is scheduled to take up the permit request at its May 18 meeting.

Specifically, the conditional use permit, if granted, would allow its developer, Ryan Nelms of Ryan Material Inc., to put in two new borrow pits on about 126.8 acres that previously was used for timber harvesting. One pit would be about 27 acres and the other about 12 acres.

Though the borrow pits would be in Suffolk, the 2.8 miles of haul routes for them are in Isle of Wight County. Dump trucks accessing the site would use Shady Pine Lane, a narrow, gravel, one-lane private residential road as the main way to get in and out, otherwise known as its legal ingress and egress easement.

The surface mining operation of the borrow pits would last for between three years and seven years, and see the potential for a minimum of 40 to 60 dump truck trips in and out of the site daily, with the potential for up to 150 trips. The permit requests a seven-year use, but if the material runs out sooner, the developer will begin the reclamation process, with its use turning into a farm pond.

Borrow pits help with extracting sand from the ground, with most of the sand and gravel produced in the state coming from surface pits in coastal areas, according to the state Department of Energy. Sand and gravel form a natural aggregate, a manufactured crushed stone and sand made by crushing bedrock, or naturally occurring unconsolidated sand and gravel.

Though some had issues with the borrow pits themselves, Suffolk and Isle of Wight residents who live in the area of the proposed site were concerned about the dump trucks that would traverse narrow roads in the county to get to and from the pits.

Bobby Burris, a former sandpit operator who lives off of Virginia Route 10 in Chuckatuck within minutes of four borrow pits, detailed traffic and safety issues that he said would only be exacerbated by adding another borrow pit nearby.

“The thing that hasn’t been brought up to y’all is that if you let this sandpit be open, that is seven or eight sandpits within a five-mile radius of Chuckatuck,” Burris said.

But with the proposed borrow pits going in Suffolk, it meant Isle of Wight’s Board of Supervisors and Planning Commission had no say in the permit process. However, the county must approve a site plan for access construction within the easement along with a Virginia Department of Transportation-approved entrance off Longview Drive.

Isle of Wight officials provided Suffolk planners with photographs showing two large trucks facing opposite directions on Longview and Sandy Ridge roads not having enough room to pass one another without steering out of the road or hitting one another.

It also measured two typical sections of Sandy Ridge Drive from the intersection of Longview Drive to the Suffolk boundary at Audubon Road. Those pavement widths ranged from 15 feet to 16 feet with poor pavement conditions, rolled edges, trash cans, mailboxes and other features which essentially cut the width of the road to less than 15 feet in some areas.

The pavement width on Audubon Road at the Isle of Wight/Suffolk line maintenance transition point is 22 feet with 2-foot grass shoulders and ditches.

Isle of Wight Planning Commission Chairman Brian Carroll also noted in an April 6 letter that Shady Pine, Longview and Sandy Ridge are not in any of the county’s short- or long-term plans for improvements.

In the city planning department’s staff report for the project, it said the roads in Isle of Wight on the designated haul route have areas with less than 18 feet of pavement, no functional shoulders and are not sized for two-way traffic.

Isle of Wight County Administrator Randy Keaton outlined those and other issues during the public hearing.

Keaton noted that the project applicants submitted a special use permit request to Isle of Wight’s planning department in October 2020. Two months later, the county said that because the borrow pits would not be in the county, it did not need to take action.

However, it did note that “the potential for conflicts with existing residential uses are high and would make this use incompatible with the existing character of the surrounding area.”

“As you can see, it is physically impossible for two trucks to meet on Longview or Sandy Ridge and not hit each other or run off the road and onto the shoulder,” Keaton said.

He said the 15.5-foot width of Sandy Ridge Drive would be more problematic due to the narrowness of the shoulder.

With several borrow pits in Isle of Wight, Keaton said he wasn’t opposed to one going in Suffolk, but asked that the conditional use permit be denied unless there was an alternate route for it directly to the 22-foot wide Audubon Road and not use county roads.

Though the safety issues with the road are a primary concern, dust kicking up from the dump trucks was another.

Shane Wilson, who has lived on Shady Pine Lane for 31 years, said the haul route would pass in front of his house and the dump trucks using it would kick up dust and make too much noise. He said no amount of water would adequately mitigate the dust, especially in the hot summer months.

“They want to make money, that’s fine,” Wilson said. “They can do it somewhere else.”

The pit applicants and their representatives said they would employ dust control measures such as water trucks to be used on the in and out lane, which would be a private, separate road.

They also met with residents and with Christian Home Baptist Church off of Longview Drive in an attempt to address their concerns, and they lowered the peak trip count to 150 trucks and specified a time in which its dump trucks would not pass by it.

The pit, if approved, would operate from 7 a.m. to 5 p.m. Monday through Friday and 7 a.m. to 12 p.m. Saturday. Ryan Material would also have to put in a 100-foot vegetated resource protection area buffer due to its proposed location near Godwin’s Mill Pond and Crumps Mill Pond, and a 200-foot buffer on the western border with Isle of Wight in compliance with the county’s supplementary use regulations, which state that no part of a borrow pit operation can be put less than 200 feet from adjoining property lines.

Roger Whitley, speaking against the conditional use permit, detailed a 2001 accident on Longview Drive that injured his son on Longview Drive. He said if it passes, more accidents can be expected.

“Something is definitely going to happen,” Whitley said. “And this (was) not even with big trucks. So you just put that formula together and it’s just a recipe for disaster.”

The city’s planning staff agreed, saying “the applicant has not effectively demonstrated that anticipated hazards will be mitigated.”