Look (good) before you leap 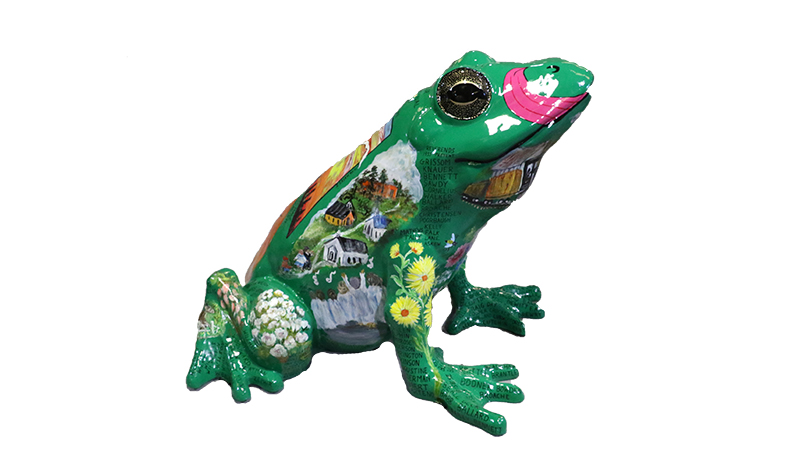 The frog pictured, named Jeremiah, will soon be on display outside of Windsor Congregational Christian Church. Seven artists worked on painting the frog for six months. It also features four coats of automotive clear coat paint to protect the acrylic paintings on the sculpture.

Painting is complete on the first frog sculpture that will help serve as an emblem of the town of Windsor, and the sculpture is expected to be publicly placed outside Windsor Congregational Christian Church on either Saturday, April 30, or Sunday, May 1.

“It’ll most likely be on the Sunday,” Dewitt Holland said. “Probably after church sometime.”

That frog was purchased by the church.

Meanwhile, three other frog sculptures, each of which were purchased by the town, have artists attached.

All four sculptures are identical in structural shape and size but will be unique in paint design.

Holland, who is a member of the Windsor Economic Development Authority, said that the EDA voted on the paint designs of the town-owned frogs on April 4.

“They accepted the Boy Scout design,” Holland said, noting that one of the frogs will be painted as a Virginia green tree frog dressed in a scout’s uniform.

As a leader of the Boy Scouts troop in town, Holland is playing a key role in the painting of that frog.

“It’s in the works,” he said. “I’m trying to paint the frog and the uniform, and then the scouts are going to do all the patches on it and everything. I need to get that done and gone so I can work on my frog. My frog is a farmer frog.”

Another one of the EDA-approved paint designs will highlight, on a frog, the different kinds of farming that occur within the town of Windsor.

The third design for the town-owned frogs is expected to present to onlookers a royal frog. Holland said the designer wants to do a green frog with a crown and with crystals all over it.

He said there is a redesign going on with that one due to the concern that during winter, the rain and freezing temperatures could cause the gems to fall off.

Holland said he expects the three town-owned frogs will not be ready for placement until late summer or the fall.

Jeremiah, however, should be ready to go in about a week.

Holland, who attends Windsor Congregational Christian Church, said the church voted to call its frog Jeremiah, after the prophet featured in the Bible.

“The Christian church art class has been painting on that (frog) since October, and they finished about two, three weeks ago,” Holland said Wednesday, April 20.

He noted that his mother, Hannah Wise Holland, who teaches the art class, came up with the overall paint design, and seven different artists were involved in the paintings found on it.

Part of Jeremiah is covered in the last names of families that have been in the church from 1877 and up, Holland said.