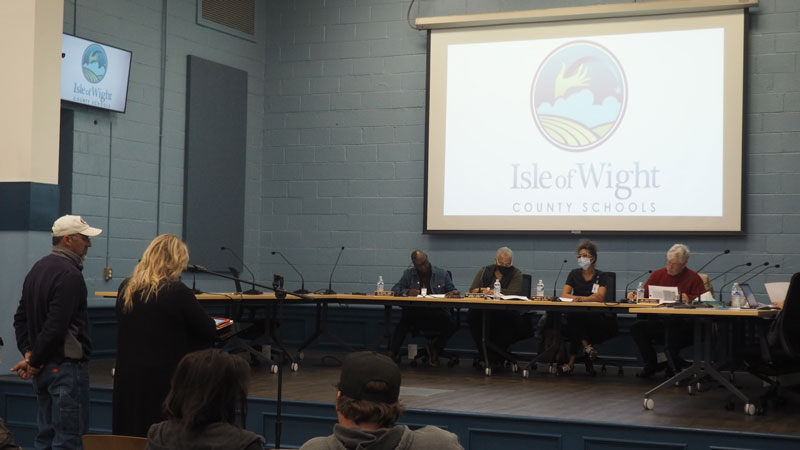 Heidi Swartz presents her objections to the Discovery Education and MackinVIA iPad apps at a special meeting of Isle of Wight County’s School Board. Stephen Faleski | The Smithfield Times

Isle of Wight County’s School Board denied a second parent’s request to remove content from all school-issued iPads after a 2-2 tie vote.

Heidi Swartz, the mother of a Smithfield High school student, persuaded board members Michael Vines and John Collick to vote in favor of ending the school system’s use of the Discovery Education and MackinVIA apps, which she described as providing “partisan” content. But with only four of the five board members present at the April 19 special meeting, Vines’ motion to discontinue the school system’s use of the apps failed when Chairwoman Denise Tynes and board member Renee Dial cast their dissenting votes, resulting in the tie.

The School Board’s vice chairman, Michael Cunningham, was absent from the meeting. Per School Board Policy BDDF, the board revoted at its April 21 meeting due to the tie created by Cunningham’s absence. Cunningham remained absent at the April 21 meeting, resulting the same 2-2 split among the four remaining board members.

The April 19 meeting served as Swartz’s final appeal under School Board Policy KLB, which allows parents to challenge the school system’s use of books and other learning resources they find objectionable. Though she’d successfully petitioned to have the apps taken off her son’s device, she’d gone to SHS Principal Bryan Thrift months ago seeking to have them removed from every iPad issued to Isle of Wight County Schools’ 5,500-plus students. When a committee consisting of Thrift, a teacher, the school’s library media specialist and a student voted to continue using the challenged apps, she appealed to Assistant Superintendent Mike Lombardo, who upheld the committee’s decision.

On Discovery Education, Swartz said, she found a resource for teachers titled “Teaching the News,” which suggests they ask their students to choose “one word” that “best describes how you feel about” the Jan. 6, 2021 riot, where a mob of former President Donald Trump’s supporters stormed the U.S. Capitol on the day Congress was to certify current President Joe Biden as the winner of the 2020 presidential election. Among the word choices students may already know, the exercise states, are “angry,” “happy,” “sad,” “scared,” “unsafe,” “safe,” and “worried.”

The exercise, she added, doesn’t “offer any type of information that teaches” those arrested for participating “still have not received their due process.”

“All the information very much gears toward one side,” she said.

According to the U.S. Department of Justice, more than 725 people from nearly all 50 states and the District of Columbia have been charged in connection with the riot. Of these, roughly 165 had pleaded guilty to a variety of federal charges, ranging from misdemeanors to felony obstruction, as of the date’s one-year anniversary. Some who have opted to proceed to trial are still waiting for their day in court.

In MackinVIA, Swartz said, she found only six books listed under the category of “Religion and Spirituality,” four related to Islam, one on protestant Christian theologian John Calvin, and Charles Dickens’ “A Christmas Carol.”

“If you search ‘police’ under Discovery Ed, the first seven articles on the page relate to police brutality,” Swartz added. “We’re placing school resource officers in our schools in Isle of Wight County … but the apps seem to undermine this when they’re promoting anti-police (sentiment).”

Swartz said she’d also found a “challenging confirmations on bias” test, which advised students to only take the test if they were white.

“To me, that’s setting up a race issue,” Swartz said.

Discovery Education, according to school officials, curates digital content from a variety of national news and educational outlets, while MackinVIA functions as a digital library, which allows students to check out books and read them on their school-issued devices.

According to IWCS IT Director Eric Cooprider, all school-issued iPads, MacBooks and ChromeBooks have filtering software that restricts content both in and out of school. The intent, he said, is that teachers would assign a specific video or activity on one of the apps to his or her class.

Cooprider estimates at least 57% of teachers use Discovery Education, most heavily in Isle of Wight’s middle and high schools, though Westside and Carrollton elementary schools also showed high usage.

Swartz had also taken issue with a third app — TEDEd — which school officials had already removed for all students as of December. The TEDEd app, according to Isle of Wight County Schools spokeswoman Lynn Briggs, had provided access to education-related TED Talks — a nonprofit platform that produces short recordings of speakers talking about particular issues. IWCS removed the app due to additional parental objections regarding its inability to filter content, Briggs said.

The April 19 vote marked the second time this school year — and in the school system’s history — that a parent has taken the KLB process from an initial complaint to a final appeal before the School Board.

Candice Vande Brake, the mother of a Windsor Elementary kindergartner, had gone through the same process to challenge Discovery Education and an app developed by Hampton Roads public broadcasting station WHRO called eMediaVA, arguing that she’d found content on the two programs that could “contribute to diminished family and religious values.” Among the content Vande Brake had found objectionable was a children’s book titled “Max and the Talent Show,” which features a transgender character, and a news article titled “Police shooting of Louisiana man sparks outrage.”

Vande Brake, like Swartz, had already petitioned to have the apps removed from her own child’s device, but had sought to end their use throughout the school system. She was unsuccessful in her final appeal to the School Board in March.

Prior to the School Board’s revote, seven audience members spoke on the issue during the portion of the meeting reserved for public comments. Carrsville-area resident Patricia Williams urged the board to reconsider Swartz’s and Vande Brake’s requests, arguing that students could “easily access material in their school library and their school-issued devices containing anti-police rhetoric” and material that “causes racial division.”

Carrollton-area resident Timothy Mallory, however, argued Swartz, Vande Brake and others who urged the apps’ removal represented “only a few” members of the county’s population.

“Awareness and the understanding of the differences of people, countries, backgrounds, have a correlation in attitudes and values of everyone,” Mallory said. “No one group should dictate what should and should not be allowed in an educational setting.”

Vines again motioned to remove the apps, stating that “as a parent” he did “feel there are divisive materials in Discovery Ed and Mackin VIA.”

Tynes, however, who again voted to keep the apps in place, said she’d received a number of emails from parents unable to attend that evening’s meeting, who “were for keeping them on the devices.”