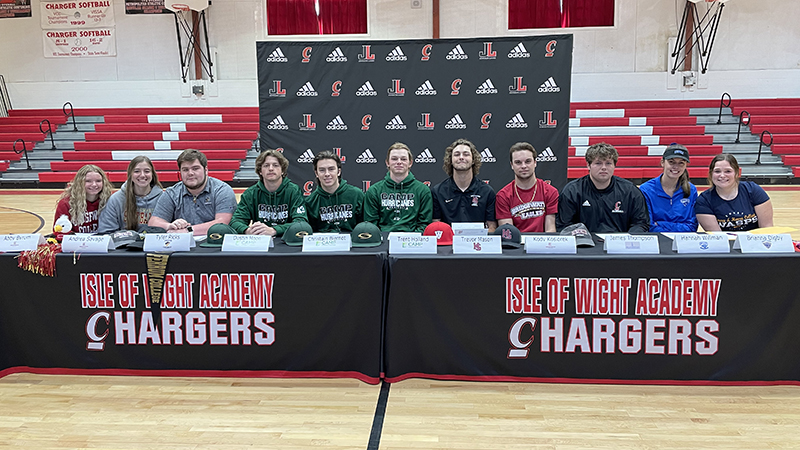 The school’s student body, as well as parents, administrators and coaches, were on hand to celebrate the students’ moving on to play collegiate athletics, as well as IWA’s largest-ever signing ceremony.

The athletes, along with remarks by their coaches, are as follows:

“She’s a great girl to be around, and I’m so glad I got the opportunity to coach her,” IWA Softball Head Coach Jill Edwards said.

“Third base is a tough corner to play, and Andrea is a ‘Savage’ at it,” Edwards said.

“Tyler was a tremendous asset to the football program, and his ability to adapt to new challenges here will always be appreciated,” IWA Athletic Director and Football Head Coach Dale Chapman said.

“He was a tough guy for us and played hard defense,” Chapman said.

“She was and is self-motivated to do better every time, and she has the ability to do it,” IWA Golf Head Coach Gene Milburn.

“To succeed at the college level, athletes should have honesty, curiosity and commitment. Bri has all three,” IWA Swimming Head Coach Kristian Ramkvist said.

Mason drove in three runs and went 2-for-4 with a home run as the Chargers varsity baseball team topped Southampton Academy 15-0 in six innings in Courtland on April 8.

Mason and Payton Shipman homered for the Chargers, who rapped out 17 hits against the Raiders. Biernot, Jacob Chapman and Thompson each contributed three knocks for the Chargers.

Jake Lineberry earned the win for IWA on the mound, pitching two scoreless and hitless innings in relief of starter Zach Rusinak, who allowed only two hits in four frames.

The win raised the Chargers’ record to 8-0. They are ranked fifth in the inaugural Virginia Independent Schools Athletic Association Division II State Poll.

Chapman’s round-tripper was the first of his career. He finished 1-for-2 with two RBIs and scored once. His towering fly ball to center field appeared headed for a defender’s glove, but the Brunswick player jumped to make the catch, falling over the outfield fence and landing out of play.

Chapman rounded first and stopped momentarily as the officiating crew initially signaled out before ultimately ruling his big fly a home run. Chapman sprinted around the bases to find a throng of teammates gathered to help him celebrate.

Kody Kosiorek was 3-for-3 with four RBIs and scored two runs. Shipman was 3-for-3, driving in and scoring three times.

Shipman and Biernot tied with six total bases in the contest. Holland pitched 1.2 scoreless innings in relief to earn the win.

IWA’s varsity softball team walloped Southampton Academy 8-0 on April 5 but succumbed to Brunswick 7-3 the next day.