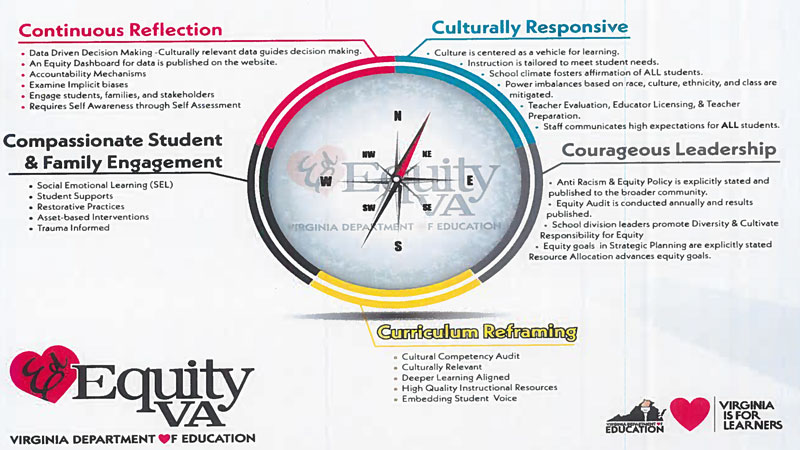 As of last year, the Virginia Department of Education’s EdEquityVA initiative was recommending schools conduct an “equity audit.” The VDOE rescinded the initiative in February after State Superintendent of Public Instruction Jillian Barlow characterized EdEquityVA as a “divisive concept.”

A $35,000 “equity audit,” which Isle of Wight County Schools had hoped to complete by the end of February, is paused.

IWCS had contracted with Dr. Valaida Wise Consulting LLC in 2021 to produce a report that — in the words of the proposal Wise submitted — was to “illuminate the school system’s history and current reality” and “make recommendations about practical, strategic and actionable next steps toward becoming an antiracist organization.”

Specifically, Wise proposed to gather data on attendance, discipline, extracurricular participation and other factors likely to impact a student’s performance at school, and then “disaggregate” the data by race, gender, family income, English language proficiency and other demographics to uncover where any disparities are occurring.

Superintendent Dr. Jim Thornton issued the purchase order for Wise’s services last May. Wise’s proposal had listed a total cost of $60,000 — $35,000 for the equity audit and another $25,000 for the development of a three-year equity plan.

According to IWCS spokeswoman Lynn Briggs, the equity audit is now “on hold” pending adoption of the school system’s new strategic plan.

The equity audit and the three-year equity plan were both initially intended to influence the new strategic plan, which Thornton said last fall would have “an equity lens.”

Per state regulations, Virginia school boards must review and approve a six-year plan biennially, and submit that plan by Jan. 15 of each odd-numbered year to the state superintendent of public instruction.

Last fall, a steering committee of staff, students, parents and other community members identified four main goals for the new plan: academic excellence, family engagement, recruitment and retention, and organizational effectiveness and efficiency. Workgroups for each goal, also composed of parents, employees, students and community members, then met to decide on strategies for each goal.

The resulting two-page plan now makes no mention of the word “equity,” though it does state that “professional learning opportunities” should be provided for general education and special education staff in “strategies for inclusive classrooms.”

The steering committee will reconvene later this month and send a final draft of the 2022-27 plan to the School Board in May for a public hearing. Citizens can view the current draft and provide feedback at www.iwcs.k12.va.us/apps/news/article/1592603.

The school system was still pursuing its equity focus as of January when it distributed a survey, intended to inform the audit, which asked students, parents and other participants to weigh in on whether they believed adults felt comfortable talking to students about news pertaining to race or LGBT issues, whether IWCS curriculum ensured diverse groups and cultures were positively represented and validated, and whether students and adults treated people from different races or cultures fairly.

The local equity survey was sent out around the same time as a state-mandated questionnaire, known as the Virginia School Survey of Climate and Working Conditions. Both drew criticism from parents at a January School Board meeting; one parent described the efforts as “data-mining” children to “sway opinion and minds.”

Isle of Wight’s School Board has received months-long backlash from a vocal group of county residents over the perceived influence of Critical Race Theory in public education. CRT, as the term is often abbreviated, argues American laws and institutions have perpetuated inequalities among minority groups. Though Isle of Wight school officials have repeatedly stated the graduate-level academic discipline isn’t part of the school system’s K-12 curriculum, critics say it’s become embedded in Isle of Wight’s diversity, equity and inclusion initiatives. In January, Gov. Glenn Youngkin signed an executive order barring the teaching of “inherently divisive concepts, including Critical Race Theory” in public schools.

The strategic plan is slated to be adopted in June.