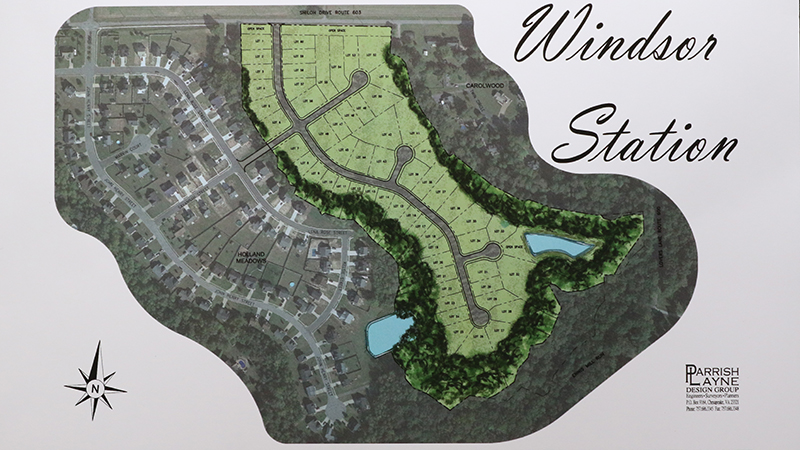 This rendering from Parrish Layne Design Group provides an aerial-view illustration that approximates what the Windsor Station Subdivision will look like. The Town Council approved the rezoning request that will make this development possible.

The Windsor Town Council voted unanimously Tuesday, April 12, to approve a rezoning request that allows for the development of 60 new, single-family residential lots, a subdivision that will be known as Windsor Station.

The property for this is located on Shiloh Drive and connects to the existing Holland Meadows Subdivision. The property is identified as Tax Map Number 54-01-094B.

As stated on previous meeting agendas, the rezoning request was by First Dominion Land Inc., the property owners, to rezone 40.028 acres from A-1 to R1/MHP (Mobile Home Park) to create the 60 single-family residential lots.

The council’s approval was subject to revisions to two of the developer’s proffer statements.

The first statement, proffer No. 8, originally read as the following when presented to the Windsor Planning Commission on Feb. 23: “Front building lines shall be allowed to reduce to a minimum of thirty feet (30′). The developer shall contribute One Thousand Dollars to the Town of Windsor

from the street right of way.”

A revision offered by the developer to the Planning Commission on March 23 was that “the front building lines shall be allowed to reduce to a minimum of 30 feet as measured from the front (rights of way).”

Then, after further discussion at the March 23 commission meeting, the developer offered this additional revision to proffer No. 8 on April 12 to the Town Council: “The developer will change the minimum front setback from 30 feet to 35 feet.”

A member of the public, Lewis Edmonds, who is a resident of Holland Meadows, made a recommendation about proffer No. 8 during the April 12 council meeting that the council ended up following.

“For the houses that have the 35-foot standoff, I recommend that you require a driveway that has a minimum width of 18 feet so that you could fit two cars side by side if you needed to,” he said. “All of the homes that Ashdon (Builders Inc.) is offering are two-car garages, so that would match with what they’re doing.”

When reading the agreed-upon revision to proffer No. 8 into the record right before the council’s vote, Interim Windsor Zoning Administrator Maxie Brown said the amendment was to add language stating that “all driveways will be a minimum of 18 feet (wide).”

The second proffer statement from the developer that the Town Council called to revise was proffer No. 11.

Documentation in the board meeting packet first mentions proffer No. 11 as being presented April 12 in the wake of the March 23 Planning Commission meeting. The proffer states, “The developer will (provide) amenities in the open-space area.”

Like the developer did for commissioners at the March 23 commission meeting, council members April 12 received an aerial-view rendering of the proposed subdivision, with designations of where lots, open spaces and bodies of water would be located. The illustration included an open-space area that could become a playground, and it was located near the back of the subdivision next to a stormwater basin.

The commission’s decision to send the rezoning request to council with recommendation for approval came on a 3-2 vote. Opposing the motion were Larissa Williams and G. Devon Hewitt, while Dale Scott abstained and Jessie Taylor was absent.
Williams and Hewitt were among those who desired to see the open-space area moved to a location more easily accessible to all in the subdivision. Safety issues were also raised given the open-space area’s location right next to a stormwater basin.

Councilwoman Kelly Blankenship cited major concerns with regard to the same safety issues, and other council members agreed, including Councilman J. Randy Carr.

Blankenship also wanted to ensure a play area was not placed at the front of the subdivision next to Shiloh Drive.

Ultimately, the agreed-upon revision to proffer No. 11 that Brown read into the record stated that the open-space area would be “exclusive and removed from the stormwater area and not located along Shiloh Drive.”