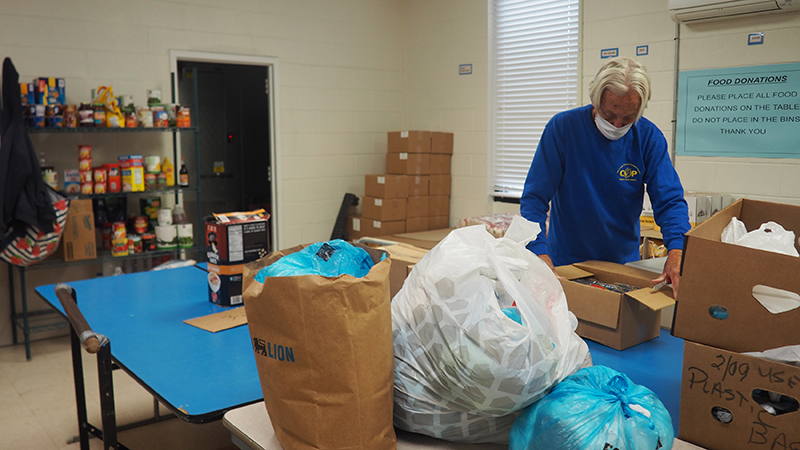 COP volunteer John Faunce packages food in the donation room for pickup at the drive-through.

On a shelf in the Isle of Wight Christian Outreach Program’s building on Grace Street sit three boxes of spaghetti from the Foodbank of Southeastern Virginia and the Eastern Shore.

Spaghetti isn’t the only thing in short supply. The entire donation room is typically “wall to wall food,” Rowlands said.

The Foodbank, which provides COP with monthly shipments of shelf-stable foodstuffs — in the past at little to no cost — states on its website that the COVID-19 pandemic and its lingering economic impacts have created a “perfect storm” of surges in demand coupled with declines in donations due to supply chain challenges.

“Because of supply chain issues, our retail donations are down significantly year over year,” saiad David Brandt, the Foodbank’s senior director of communications. “If stores barely have enough for their own shelves, they won’t have much left to donate to food banks. This forces us to purchase more food, well beyond what we would typically budget. The prior fiscal year, we spent about $1.8 million on purchasing food – mostly fresh fruits and vegetables, dairy, eggs, and lean protein. This year, we are trending toward nearly $5 million. We still have significant amounts of food on order but the delays in their arrival are making things tough on us.”

Now, Rowlands is seeing a “trickle down” effect.

The amount and types of foodstuffs the Foodbank donates to COP started to dwindle in January, he said. He expects to see even less this month.

“I spoke to the program managers at the Foodbank and they expect that shortages will continue for the foreseeable future, and that we will have to pay for most of the items,” Rowlands said.

COP sends a van to Food Lion and Kroger in Smithfield four days a week to pick up baked goods, meat and produce that’s about to expire, as part of a program known as “food rescue,” and has an arrangement with the Lidl in Hampton to buy eggs at cost. But all too frequently, the stores are out of the items COP needs on a regular basis.

Meanwhile, “our numbers have increased by about 10 families per month for the last three months,” Rowlands said of people seeking help.

COP is left with the choice of paying full price for what isn’t donated, if it’s even available, or reducing the amount of food it distributes to families in need. Rowlands estimates the former would come at a cost of roughly $1,000 per week.

But he’s hoping the community will come through with donations, money or a solution he and his fellow volunteers haven’t considered. Information on how to donate food, money or other items is available on COP’s website: https://iowcop.net/donations/.

“This month we’ll live through; next month is going to be challenging,” Rowlands said.