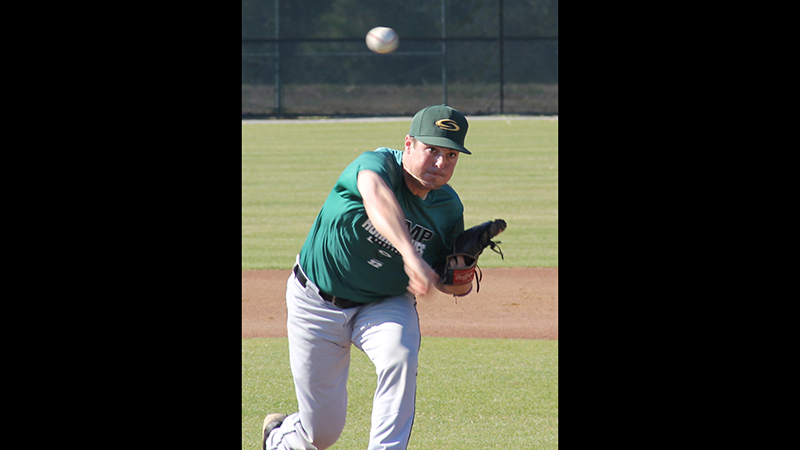 Camp Community College pitcher Nick Martins prepares for a start during the week with a bullpen session. He will be moving on after this season to play Division I baseball for George Mason University.

One of Camp Community College’s top starting pitchers will be moving on to bigger things after this season. Nick Martins, a crafty right-hander, has accepted a scholarship from George Mason University to continue his collegiate career and grace the ballfield in Fairfax.

Martins is the first Camp player under Head Coach Daniel Rollins to receive scholarship money from a Division I college program.

Martins recently demonstrated why the George Mason program was interested in him. On March 5, he pitched seven shutout innings at Repair Tech Field against Brunswick Community College. Martins, who had the Brunswick batters off-stride all game, left the game with a chance for a win with the Hurricanes leading 3-0. Unfortunately, Camp ended up losing the hard-fought game 4-3 in 15 innings.

“We have learned that when he mixes different pitches in the zone and he keeps guys off balance, he’s tough to hit,” said Peyton Traywick, the Camp baseball pitching coach.

Martins, a product of Mandarin High School in Jacksonville, Florida, was the first player to commit to Rollins after he took over the head coaching position. Twitter had something to do with that transaction.

“I always had a dream of playing college baseball,” Martins said. “I wasn’t really top tier. I was alright, but I knew how to play the game. My senior year, a couple of schools talked to me during my spring season, but nothing more than occasional phone calls. I played for a summer ball team in Jacksonville and some video got sent around on Twitter, and Coach Rollins saw it and got my information.”

The two started talking back and forth.

“I liked what he was saying, and he liked me,” Martins said. “What helped me moving eight hours up here was that my brother lived in Norfolk. That played a big role in my decision-making in coming here to play ball.”

Martins caught the attention of the George Mason University coaching staff when the teams played a fall game in Fairfax, despite the contest not having a great ending for Martins and the Hurricanes. Martins pitched the entire seven-inning game and came into the bottom of the seventh with the game tied 1-1. Martins was pitching to a batter who he had struck out earlier in the game. The two battled as the GMU hitter fouled off a few two-seam fastballs. On a 3-2 count, Martins threw a change-up on the outside corner and the batter “flicked” an opposite field, wind-blown, walk-off home run.

“Sometimes that just happens,” Martins said. “Hats off to that guy.”

“It was heartbreaking that it was an opposite field home run. I pitched well but lost the game and was disappointed that I just gave up a walk-off homer, but I guess they (GMU coaches) still liked what they saw, and they took me on a campus visit right after that,” Martins said.

Traywick said, “He pitched very well that day and they (GMU coaches) recognized that early, and that led to the opportunity of him getting to play there.”

Learning at the junior college level has been a big deal for Martins, which should serve him well when he plays Division I ball.

“One difference between junior college and Division I players is how they approach at-bats. Junior college players are hungry, and they swing at too many things,” he said. “Division I players have a great idea of the strike zone so if it’s close, they are taking it and waiting for the ball you leave right in the middle of their zone.”

When Martins arrived at Camp, the team did not have a designated pitching coach. Playing his first year under that system gave Martins self-discipline. Before his second season, the Hurricanes brought in Traywick as pitching coach.

“He (Traywick) recognized my work and how much I wanted to get better,” Martins said. “He kept feeding me information in ways to get better.”

Traywick said Martins has done a good job of taking ownership of his own development and does other things to help the team.

“He is also trying to implement a positive culture within the pitching staff,” Traywick said. “A lot of the credit goes to him because you have to take a lot of pride in what it is you’re trying to accomplish and to actually get there. You don’t just walk up on success. You really chip away at it, and that’s something he’s done a really good job of. He takes pride in his processes and trying to make sure he’s the best that he can be.”

Martins, a fan of the Tampa Bay Rays, will graduate from Camp this spring with an Associate in General Studies degree. At George Mason, he wants to study civil engineering.

“Camp has helped me narrow in on what I want to do,” he said.

“Nick was the first player I recruited to Camp after I was hired,” Rollins said. “He took a chance on me as a first-time head coach and Camp as such a young program. To see his growth and development as a student, athlete and person over the last three years has been fun. He has earned this opportunity to pitch at the next level, and I can’t wait to see what he accomplishes.”