Hadsell sentenced to life plus 15 years in killing of stepdaughter 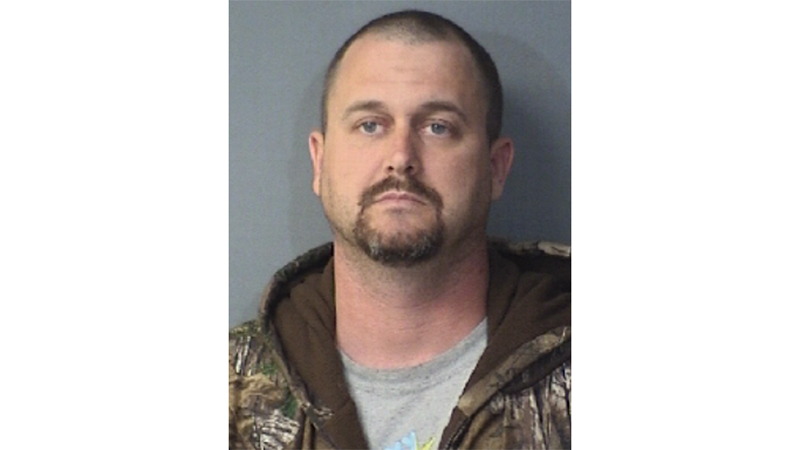 Wesley Paul Hadsell was sentenced Monday, April 4, in Southampton Circuit Court to life plus 15 years for the first-degree murder of his stepdaughter Anjelica “A.J.” Hadsell, the concealment of her dead body and the prisoner possession of a Schedule III controlled substance.

A jury found Hadsell guilty of first-degree murder and concealment of a dead body Feb. 7 following a two-week trial in Southampton Circuit Court.

Hadsell, now 43, was formally charged on Jan. 14, 2019, with the first-degree murder of A.J. Hadsell on March 3, 2015. Related to the case, he was also charged with murder — non-capital felony, and concealment of a dead body.

He pleaded not guilty to all of these charges.

The commonwealth ultimately chose to pursue the first-degree murder and concealment of a dead body charges.

A.J. was a freshman on spring break from Longwood University in Farmville at the time of her disappearance in 2015.

The search took Norfolk Police investigators and a dive team to a pond off Walters Highway/U.S. Route 258 and Joyners Bridge Road in Isle of Wight County on April 4, 2015.

Within the week, Norfolk Police came to Southampton County and told the Southampton County Sheriff’s Office of a body found outside a house in the 34000 block of Smiths Ferry Road/U.S. 258. The body was taken to the medical examiner’s office in Norfolk, where it was positively identified as that of A.J. Hadsell.

After his arrest on the aforementioned charges, Hadsell was charged with being a prisoner in possession of the Schedule III controlled substance Suboxone. Hadsell did ultimately plead guilty to this charge.

At the start of the sentencing hearing April 4, the commonwealth and the court addressed a motion from the defense and a motion from Hadsell himself.

Colvin indicated that this motion was premature, and Southampton Circuit Court Judge Lawson Wayne Farmer agreed that it was not the appropriate venue for it.

The motion from the defense was to set aside the jury verdict based on two key points:

Colvin argued that the evidence indicates that Hadsell was thoughtful, premeditated and purposeful in his movements, and she cited supporting case law.

She also argued that a jury instruction to consider intoxication would have been denied due to lack of evidence.

To the second point, she argued that the jury does not have to deliberate for a particular length of time and that this case’s jury was attentive and was able to see video evidence in a large format thanks to the setup at the Hunterdale temporary courthouse, which is where Southampton Circuit Court jury trials are taking place during the Southampton County Courthouse renovation.

Colvin also cited a previous case in which a jury recommended a death verdict in 25 minutes.

She said the jury’s quickness was because it was laboring under no uncertainty, and it showed the strength of the commonwealth’s case.

Farmer denied the defense’s motion to set aside the jury verdict, stating that Hadsell’s disheveled appearance and emotional behavior on display in video evidence did not suggest he had a failure to form intent. He also reminded counsel that he instructed the jury not to consider arguments as evidence.

And while the judge admitted that everyone was surprised by the quickness of the jury’s verdict, he said that did not mean the verdict was invalid. He stated that in all of his years of experience, he has not been in a courtroom with a jury as attentive as this one.

“The period of time was irrelevant,” he said.

He noted that they were likely able to come to such a quick decision because the evidence against Hadsell was overwhelming.

When the commonwealth was invited to provide evidence relevant to sentencing, the commonwealth called Zach Hoffer to the stand to speak to the negative impact this case has had on his life.

Hoffer is the ex-husband of Jennifer Hadsell, A.J.’s mother. Part of Wesley Paul Hadsell’s defense included the suggestion that Hoffer could have been A.J.’s killer, though Ellenson ultimately favored the theory that she committed suicide.

Hoffer was sworn in and took the stand, but before questions could be asked and Hoffer could speak, Ellenson objected, arguing that Hoffer did not qualify as a victim.

Farmer sustained the objection and asked Hoffer to step down.

“No… no. Anjelica was my daughter,” Hoffer said. Then pointing to Hadsell, he said, “This guy is a coward!”

Farmer told Hoffer he needed to step down. Bailiffs surrounded Hoffer, who asked them not to touch him.

Southampton County Sheriff Josh A. Wyche Sr. and a bailiff began to escort Hoffer off the stand and across the courtroom, but as they passed by Hadsell’s location and held Hoffer’s arms, Hoffer began to struggle with them and again called Hadsell a coward.

As Hoffer, Wyche and the bailiff moved to the other end of the courtroom, the struggle intensified and more bailiffs sought to subdue Hoffer, who would not cooperate. Wyche and the bailiffs pinned Hoffer on the floor as people from the gallery cleared the area where the group neared. Other people from the gallery closed in, pleading with Hoffer to calm down.

Hoffer ultimately did, enough to be escorted out of the courtroom, and a recess followed.

When the court came back into session, the commonwealth argued that given Hadsell’s significant criminal history, which includes bank robbery and burglary, and the circumstances of the present case, the sentencing guidelines were not adequate.

“Mr. Hadsell has earned each and every day of a life-plus-15 sentence,” Colvin said, noting that he is not a person that can be rehabilitated.

In her closing argument during Hadsell’s trial, Colvin said heroin was Wesley Hadsell’s murder weapon, stating that he had mentioned knowing how deadly heroin could be and that he personally avoided it for this reason.

Norfolk’s Chief Medical Examiner determined A.J. died from acute heroin poisoning. Colvin highlighted that A.J. did not use drugs, something a hair analysis indicated, along with other evidence.

Colvin said records show Hadsell tried calling his drug dealer 30 to 40 times in the early morning hours of March 3, and the drug dealer, who Cooke said has since turned his life around, testified that he sold heroin to Hadsell.

Colvin showed the jury photos of A.J.’s body after it was discovered, and she mentioned the control injuries on her body. Colvin indicated bruising was consistent with someone being held down and forced to intake something.

During the sentencing hearing, Colvin highlighted other circumstances of the case, noting that A.J.’s body was found face down in a ditch behind the abandoned home on Smiths Ferry Road. During the trial, Colvin had noted that the examiner could not tell if A.J. was raped before or after death, as her pants were found pulled down, which led to deterioration of that part of her body.

Colvin said sentencing should take into account that this murder was a crime against a vulnerable person, that Hadsell relished the attention from the media during the search for A.J., that he tied up law enforcement resources with the search, that he tried to frame a vulnerable boy for A.J.’s murder and that he never showed remorse for anything.

The message that sentencing should send, Colvin said, is that the justice system may be slow, but with patience, justice will prevail.

“We can prevent Mr. Hadsell from hurting anyone else ever again,” Colvin said.

In his response, Ellenson highlighted evidence that suggested a positive, caring relationship between Hadsell and A.J., and he also encouraged the court to work within the sentencing guidelines.

Cooke rebutted, stating that the guidelines were not appropriate in this case. He highlighted how Hadsell would have been happy for Corey French, a friend of A.J.’s, to have been convicted of the crimes.

Cooke also highlighted how Hoffer’s behavior earlier in the hearing showed how raw the devastation is for A.J.’s loved ones, even seven years later, and Cooke noted that A.J.’s family was not present in the court that day for this very reason.

Hadsell gave an allocution statement, which the American Bar Association describes as a formal opportunity for a defendant to address the court to express remorse and explain personal circumstances that might be considered in sentencing.

“I have been wrongfully convicted of these crimes,” Hadsell said, adding that his legal fight is long from over.

He described the history of his relationship with A.J., explaining how they bonded as he and her mother began to form a new family.

“Our quality of life as a family was perfect,” he said.

He recalled when he adopted A.J., mentioning that it was a big moment to him when she gave her OK to become a Hadsell.

“I’ll never forget how that made me feel,” he said.

After talking more about his relationship with A.J., he described her going off to college at Longwood, noting that the day they moved her in there was a sad and happy one.

He said she came home every chance she could.

He said that while at college, she was becoming depressed. He said that going to college had put a strain on her relationship with her boyfriend.

When he discussed the days leading up to spring break, he alluded to text messages between him and A.J. that he said were not included in the trial. He said they revealed that A.J. said she loved him but that he let her down by using drugs. He said she told him to fix the problem, and he said it was fixed.

“Today, I do take responsibility for hurting Angelica,” he said, but he noted he was not doing this in the context of the crimes he was convicted of.

He agreed with Cooke’s statement made earlier in the hearing that someone who loves A.J. would not have left her body like it was found. He said that his actions did not cause her death, and that they did not leave her like trash.

He revisited some details from the case, claiming they showed evidence that he could not have been where the commonwealth accuses him of being to have committed these crimes.

He said, “We were never here for the truth,” accusing the court of eliminating things from consideration in the trial that did not fit the commonwealth’s case.

He closed with the statement, “An injustice allowed anywhere prevents justice everywhere.”

Farmer said he would spare Hadsell a long speech before his sentencing, rejecting his allocution.

“You took a beautiful, young life and did dump her like garbage in Southampton County,” Farmer said.

He told Hadsell that his actions that the jury found him guilty of were the most callous and egregious imaginable. The judge also expressed contempt that Hadsell would even blame A.J. herself by hinting that she might have killed herself.

“I don’t accept one word of your defense of yourself,” Farmer said.

The judge also made a point to note that he has been observant of Hadsell’s behavior in the courtroom and that during the scuffle between Hoffer, the sheriff and bailiffs, he saw the smirk on Hadsell’s face.

The judge ultimately agreed with the commonwealth’s recommendation, sentencing Hadsell to life plus 15 years.

Farmer noted that Hadsell plans to make an appeal but, for the time being, said he should be remanded to custody to begin serving his sentence.