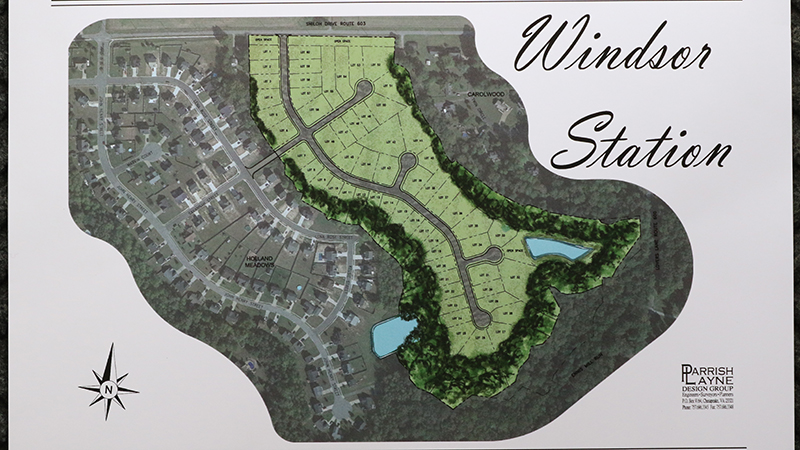 This rendering from Parrish Layne Design Group provides an aerial-view illustration of what the proposed Windsor Station Subdivision would look like. The Town Council will now consider granting the rezoning request to make the subdivision possible.

The Windsor Planning Commission voted 3-2 at its Wednesday, March 23, meeting to send the Windsor Station rezoning request to Town Council with recommendation for approval if changes to the proffers that were proposed during the Wednesday meeting are incorporated.

Opposing the motion were Larissa Williams and G. Devon Hewitt. Dale Scott abstained, and Jessie Taylor was absent. Vice Chair George L. Stubbs made the motion and voted in favor of it along with Chair Leonard L. Marshall Jr. and Ricky Vaughan.

R1/MHP (Mobile Home Park) to create 60 single-family residential lots. The property is located on Shiloh Drive and connects to the existing Holland Meadows Subdivision. The property is identified as Tax Map Number 54-01-094B.”

Prior to any discussion Wednesday, Interim Windsor Zoning Administrator Maxie Brown read off the complete list of modified proffers submitted by the developer, which addressed amendments suggested by town staff.

Some extended discussion took place during Wednesday’s meeting between the developer, applicant, owner, commissioners and Lewis Edmonds, a resident of Holland Meadows who was authorized to speak on behalf of the Holland Meadows Homeowners Association.

Edmonds mentioned a variety of concerns and also offered suggestions, including combining the homeowners associations for Holland Meadows and Windsor Station.

The developer provided commissioners with an aerial-view rendering of the proposed subdivision, with designations of where lots, open spaces and bodies of water would be located. The illustration included an open-space area that could become a playground, and it was located near the back of the subdivision next to a stormwater basin.

Williams and Hewitt were among those who desired to see this open-space area moved to a location more easily accessible to all in the subdivision. Safety issues were also raised given the open-space area’s location right next to a stormwater basin.

The meeting’s discussion led to five more changes that the Planning Commission wanted to make to the proffers before recommending the Windsor Station rezoning to Town Council for approval.

Stubbs initially made a motion to table the rezoning request until the contractor could come back with a written set of the updated proffers, but Windsor Town Manager William Saunders interjected.

“I don’t think a written set of proffers is required tonight,” Saunders said. “I think if the changes that have been proposed have been read into the record, you can vote on those.”

He said this could be done as long as what was read into the record Wednesday was part of the written version presented to the Windsor Town Council should the Planning Commission vote to send it to the council.

“There are laws about how a developer is in control of a homeowners association in a subdivision until a certain percentage of the homes are built, and then they turn it over to the residents,” he said. “Now, once he turns it over to the residents at the end of the project, the two homeowners associations may be able — when they’re both independent — to join with one another at that point.”

Stubbs withdrew his initial motion, and then Brown read into the record the five new changes to the proffers.

Those changes, with clarifications from Saunders, were as follows:

In reference to change No. 4, Saunders noted that this sidewalk is in addition to the sidewalk along the entire Shiloh Drive frontage of the new development that an ordinance already requires and that the developer already proffered to build.

After the changes were read aloud, Hewitt asked, “If that place back there against the pond is not feasible for an open space or playgrounds, is it a possibility that it could be moved closer to the front to make it more accessible to everyone?”

The answer from the developers was, “Yes.”

The complete, printed list of proffers produced by the developer at the beginning of Wednesday’s meeting that addressed suggestions from town staff read as follows:

1.The developer/owner agrees the total lot count shall not exceed 60 single-family residences.

2. The property to be rezoned shall be developed in general conformance with the conceptual plan submitted by Parrish Layne Design Group and dates April 15, 2021, a copy of which is on file with the town of Windsor.

3. In order to enhance the architectural aesthetics, the developer proffers the following:

5. The developer/owner shall install a 5-foot sidewalk along the frontage of Shiloh Drive. This sidewalk shall be installed prior to the issuance of the last Certificate of Occupancy for the subdivision.

7. The developer/owner shall extend and develop Savannah Street to provide a dedicated public right of way for street connectivity. The developer shall work with the Holland Meadows Homeowners Association to remove the stub/pavement section on Lena Rose so that it does not appear to be an abandoned street.

8. Front building lines shall be allowed to reduce to a minimum of 30 feet as measured from the front right of ways.

9. The homes shall be constructed in general conformance with the submitted building elevations.