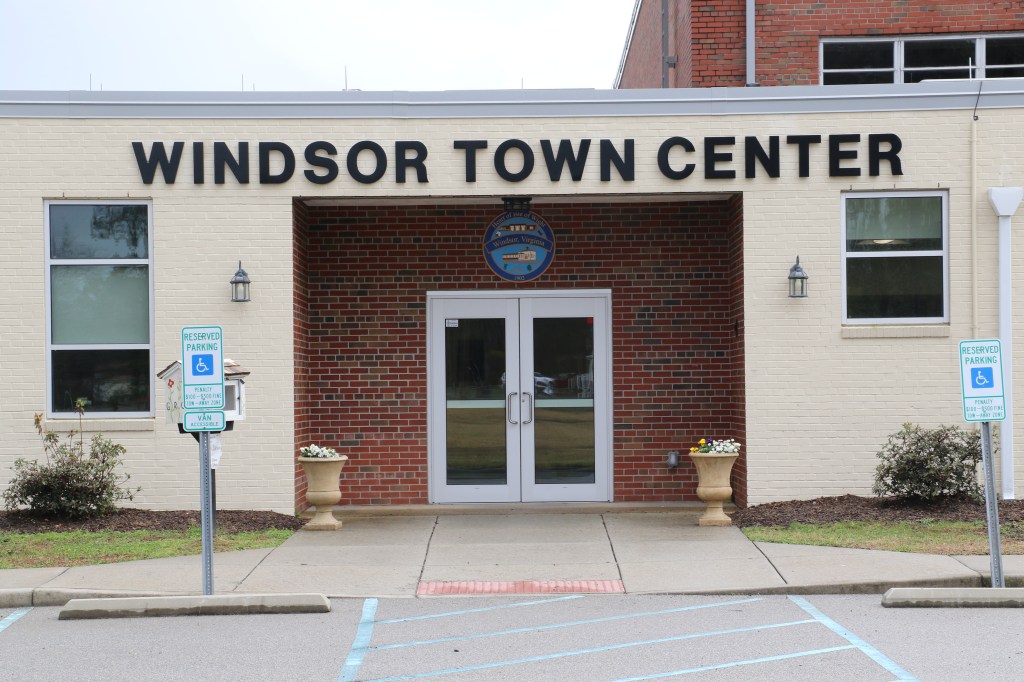 The Windsor Town Council is considering the proposals of three different groups seeking to provide programs for seniors through the use of Windsor Town Center.

The Windsor Town Council is seeking input from the Windsor Town Center Advisory Board on how best to respond to three groups’ proposals for senior programs at the town center.

Windsor Mayor Glyn T. Willis directed the matter to the advisory board following an extended introductory discussion of the proposals during the Town Council’s March 8 meeting.

Willis opened the meeting into an informal town-hall-meeting format to accommodate the larger-than-usual crowd in attendance that included some people aiming to speak on the matter. Representatives of the three groups making proposals were among those on hand.

Prior to the council hearing from these representatives and members of the public, Windsor Town Manager William Saunders provided an introduction to the matter and summaries of the proposals made.

“It’s understood that from the inception of the Windsor Town Center project, one of the initial considerations for its use was to increase the number and availability of programs for senior citizens in the Windsor area,” he said. “In the last month, town staff have been approached by three groups who have put forward proposals for senior programs in the center.”

He noted that the first of these groups is Senior Services of Southeastern Virginia, a private, nonprofit organization and the Area Agency on Aging in South Hampton Roads that supports and enriches the lives of seniors and their families through advocacy, education, information and comprehensive services.

At a Feb. 9 meeting, SSSEVA staff presented to staff members of the town and county a proposal to host senior services in the Windsor Town Center, Saunders wrote. It was also determined at that time that SSSEVA had initiated a limited I-Ride transportation route within the town of Windsor.

The plan proposed by SSSEVA at that meeting included the hosting of seniors three to four days a week — Monday, Wednesday and Thursday to start — from 10 a.m.-2 p.m. at the town center, where lunch and activities would be provided for 4-20 participants, Saunders stated. Storage space for chairs and materials related to activities, as well as use of the kitchen, was requested. Cleanup following events would be undertaken by SSSEVA staff.

Saunders wrote that the groups would primarily meet in the gym due to its proximity to the kitchen but could meet in the Arrowhead meeting room when the gym was otherwise in use. The I-Ride would transport participants to and from the meetings.

“Due to how impactful the proposed use would be to operations at the Windsor Town Center, a Memorandum of Agreement between the town and Senior Services was recommended by town staff,” Saunders said.

The other two groups to approach the town about using the WTC were Christian Outreach and Friend’s Community Church of Rescue.

Christian Outreach, a private nonprofit that sponsors a food pantry and other services in  Smithfield, has teamed up with the Friend’s Community Church of Rescue with a proposal to  pick up donated food from the Food Lion in Windsor, transport the food to the WTC, then sort,  package and distribute the food to the participants of that day’s SSSEVA programs, Saunders wrote.

He stated that Christian Outreach and Friend’s Community Church of Rescue presented the proposal to town staff Feb. 16.

Saunders next addressed some specific items for consideration relevant to SSSEVA’s proposal:

“So that may be something to consider as far as Friday use, but I also noted in their calendars for Nike Park they don’t have a lot of programs on Fridays,” Saunders added.

Saunders then addressed two specific items for consideration in connection to the proposal from Christian Outreach and Friend’s Community Church of Rescue.

“Would the usage of the Windsor Town Center for these activities rise to the level of requiring a separate Memorandum of Understanding, and if so, what parameters should be considered?” he asked.

Saunders said everything he had shared with the council to that point in his introduction and summary brought the council up to date on the matter through the morning of March 8, but that afternoon, there had been a few emails going back and forth in which SSSEVA made a proposed change to the draft MOU with regard to the use of the town center.

“Due to the fact that it is the town’s facility and the fact that we already have a Memorandum of Understanding with Isle of Wight County, the way that I propose the MOU was the pecking order of users where the town would be at the top, Parks and Rec planned events would be in the middle, and Senior Services would be subordinate to those two,” Saunders said. “(The SSSEVA’s proposed) change effectively inverts that paradigm, whereby during the days and hours that Senior Services proposed to use the facility, both Isle of Wight County Parks and Rec, Isle of Wight County and the town of Windsor would be subordinate to them.”

He said it is up to the council what level of service it is willing to lose at the town center to gain these senior services.

Zollos was the first person to speak after Saunders, and he emphasized that his email promoting the proposed change was not a demand, but he said it did represent a serious concern.

“The reason that I wanted that (change) wasn’t to set a pecking order and say, ‘Hey, we need to be above town,’ or ‘We need to be above Parks and Rec,’” he said. “My focus is on how we serve the older adults of your community. And we’re doing a year-round program that provides lunch, it provides social programs, it provides education, like chronic disease self-management, diabetes management, matter of balance and a host of important programs for older adults to live healthy and active lives. We want to bring that here to this town.

“The reason for my suggested adjustment was that we understand that if we have to stop a program, it severely impacts not only the program but the older adults that we’re serving,” he added. “This becomes a social network for these folks. They start to not only come for socialization but for their meals and other support services.”

He said that giving up eight successive weeks of town center usage to allow for the Parks and Recreation summer camp is a big deal for SSSEVA, but he said he appreciates the efforts of Saunders and Isle of Wight County Parks and Recreation Director David Smith in helping address that issue.

He noted that it is the as-yet-unknown events that the town or county might hold and potentially bump SSSEVA from the facility that creates uncertainty for the organization’s work and those who benefit from it.

“I can’t do a program like that and not know that we have a location that the older adults can count on,” Zollos said.

Smith later spoke, noting that he welcomes SSSEVA providing services to seniors on the south end of the county, and then he addressed Zollos’ proposed change to the draft MOU.

“Earlier, I did take exception with the recommendation for putting us subordinate to Senior Services, not that we want to bump any of their programs,” Smith said. “We hope that it never comes to that, and even if it does, we don’t look at it as a bump of any programs, it’s more of a negotiation that gives us the opportunity to at least share alternatives.”

One of the scenarios Smith shared as an example of a conflict that could occur was if organizers of a large athletic tournament were looking to hold their tourney in Isle of Wight and at least part of their plans involved use of the town center.

“If they wanted to play a Friday-Saturday-Sunday tournament, we didn’t want to automatically — because we were subordinate to the Senior Services — have to turn it down and not have that opportunity,” Smith said. “What we’d like to do under the original MOU that was put together was that if that happens, we can at least go to Senior Services, say, ‘Hey, we’ve got this opportunity, it’s coming up in two months. Is there something we can do? Can Senior Services have other activities?’ That’s something similar to what we do currently at Nike Park.”

He indicated that the spirit of this negotiation would be found in the question, “How can we work together to make everything happen for all parties?”

As the informal town-hall-meeting format continued, several speakers highlighted the need for senior services in the area, some particularly emphasizing the need for food bank services.

After comments from members of the public and representatives from the groups making the proposals, Willis set aside some time for comments from council members.

“This is a lot to take in, just hearing about it,” Councilwoman Kelly Blankenship said. “It seems like it’s been brewing for a while, but this is the first we’ve gotten the opportunity to hear anything.”

Vice Mayor Greg Willis said, “There’s going to be what I feel like is going to be a pretty strong financial impact to the town in utilities and water that I think we’ve got to do some sort of study to figure out where that impact is going to be and how to fund it. We’ve got to come up with a revenue source for this.”

Blankenship added, “One thought that is crossing my mind is, ethically, can we enter into another MOU that kind of trumps the MOU we’re already entered into?”

“Good point,” Mayor Willis said, “and I think that’s been some of the discussions that have been going on of… we have something that exists with Parks and Rec, and what’s the balance on some stuff there? So that has to be figured out.”

The mayor encouraged the council to revisit the purposes for which it wanted the town center.

“One of them was senior services, one of them was youth services, one of them was a facility that attracted things within the town so people had an opportunity to gather through leasing the center and so forth,” he said. “And we’ve just got to go back and make a determination of, OK, how do we continue that vision as we work through this, as compared to changing that vision at this point really only not much more than two years into having the town center and just recognizing where demand and needs are.”

He highlighted that there is a Windsor Town Center Advisory Board, composed of volunteers who were assembled to give the Town Council advice on matters related to the center.

“I think some good groundwork has been done,” he said. “We need to get the advisory board up to speed and let them advise like we’ve chartered them to do.”

Zollos indicated it would be greatly helpful if SSSEVA had a time frame on when the council would be making a decision so his organization would be able to prepare and budget and staff accordingly.

“We would target to be available and be coming to conclusions in April but recognizing a couple of circles that we’re going to have to go around on this,” Mayor Willis said. “It’s important for us to do what’s right, and we’ve got lots of rights out there to pick from, so it’s a great situation to be in. It’s just a case of making sure we do the due diligence and take all things into account as we’re working through it and do it as quickly as possible because we’re working in the same budget situation.”

“We are going to try to hold a special called meeting within the next few weeks so that we can get a recommendation to the Town Council at their April 12th meeting,” Saunders stated in a March 10 email.