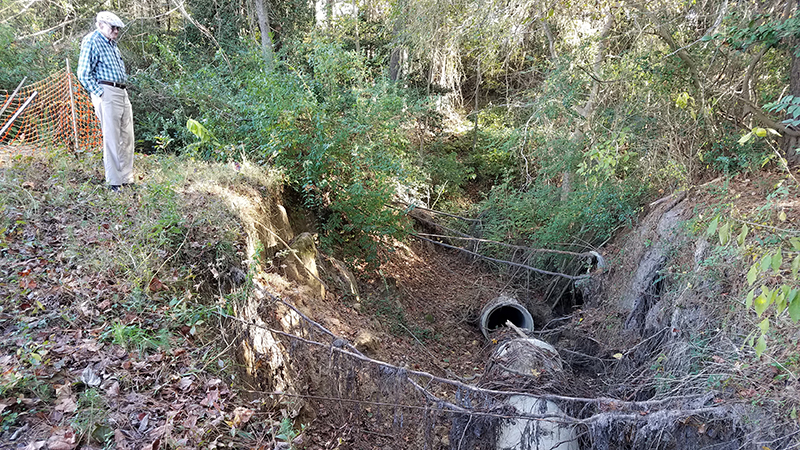 A collapsed stormwater pipe has washed away a sizable portion of Otis Brock’s backyard, leaving a chasm more than 20 feet wide and about 12 feet deep.

Carrollton resident Otis Brock and neighbors Brian and Sue Fernaays, who are suing Isle of Wight County over a collapsed stormwater pipe spanning their property line, will have to wait a little longer for their day in court.

On March 1, U.S. District Court Judge Arenda L. Wright Allen struck the scheduled April 5 trial date, pending her decision on two motions for summary judgment — one asking her to side with the three neighbors and the other asking her to rule in the county’s favor.

A request for summary judgment asks the court to rule on the merits of a case without the matter ever going to a jury. Isle of Wight County made such a request on Nov. 24, arguing there was “no dispute as to material facts.”

The county asks that the court dismiss all claims brought by the Deep Water Way residents and to order the three plaintiffs to pay the county’s legal costs to date.

Two days later, on Nov. 26, the plaintiffs filed their own request for summary judgment, asking the court to declare the county liable for having taken and damaged their property without just compensation.

Brock and his neighbors also contend there is “no genuine dispute as to any material fact,” and ask that the court put only a single question to a jury: How much money are they owed?

The case is being tried in Norfolk’s federal court, since Brock and his neighbors are alleging violations of their Fifth and 14th Amendment rights under the U.S. Constitution, which prohibits government entities from taking private property without due process or compensating the owners if said property is taken for public use. They’re also alleging a violation of the Constitution of Virginia, which states private property shall not be taken “or damaged for public use without just compensation.”

The lawsuit argues the county has taken and damaged Brock’s and the Fernaayses’ properties by not repairing the pipe, which is located in a 20-foot easement spanning 10 feet into both yards and provides stormwater retention and drainage for nearby public roads. The neighbors blame the pipe for the runoff that’s been washing away their land since 2018, and for the resulting sinkhole that’s grown into a 12-foot-deep, 20-foot-wide chasm spanning their property line.

The county, however, argues it doesn’t own the easement, and refers to easements that lack clearly defined owners as “orphaned outfalls.” According to Isle of Wight County Circuit Court records, the pipe spanning the two yards was installed in the early 1990s but a specific owner was never designated.

County officials authored a position paper in October 2019 titled “Orphaned Outfalls in Rural Virginia Localities,” intended for the Virginia Association of Counties. It argues that while modern regulations now require such easements to be dedicated to a development’s homeowners association, subdivisions built out in the 1990s and prior frequently lack a stated designee responsible for the stormwater system’s upkeep. The development’s builder or homeowners association “was the implicit beneficiary,” the paper argues, but in cases where such associations are now defunct or never existed “an unanticipated and costly asset remains.”

In 2016, Isle of Wight successfully negotiated with the state Department of Environmental Quality to be released from its municipal separate storm sewer system (MS4) permit obligations, arguing that it did not own or operate a municipal stormwater system. This allowed the county to cut the stormwater fee it adds to the real estate tax bills of residents and businesses by about 25% — dropping it from $72 to roughly $53 per year for most county residents. If the county were to acknowledge municipal ownership of a stormwater system or agree to maintain or repair privately-owned stormwater outfalls, it would run the risk of once again being subject to an MS4 permit — and potentially would need to increase its stormwater fee to cover its repair and maintenance obligations, the “Orphaned Outfalls” paper argues.

On Feb. 25, Isle of Wight filed a motion to exclude the “Orphaned Outfalls” document and “any testimony regarding said document” on the grounds that it was “irrelevant, as it does not pertain to the properties or the alleged erosion” at issue in this specific case. The document’s value, the county argues, is “far outweighed by the danger of unfair prejudice.”