Presenting the ‘It’s Great to be You!’ project 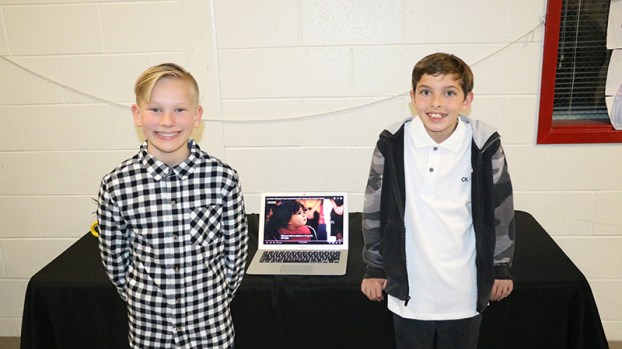 Wyatt Hove, left, and Isaiah Kuykendall are manning the “Are you born good?” video station that highlights the question that launched the “It’s Great to be You!” project. The video details an experiment that seeks to help answer the question. 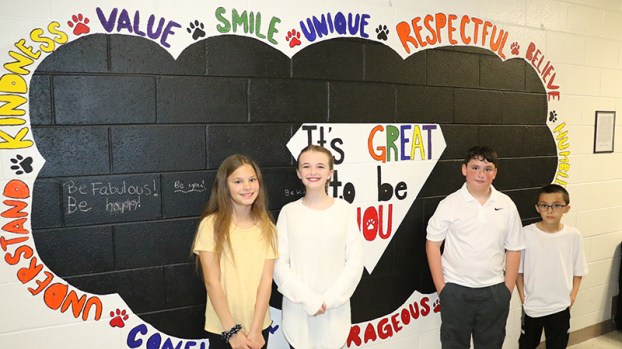 Presenting the Kindness Mural on the wall behind them are a few of the Carrsville Elementary School students who helped create it. They are, from left, Addison Callow, Madison Lacey, Samuel Twiford and Gabreal Lopez. They helped explain the process of creating the mural design and actually painting the chalkboard mural that will live on at the school. 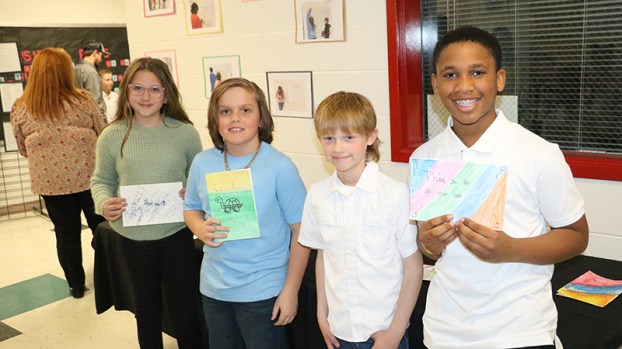 Carrsville Elementary School students manning the table with “thank you” cards and drafts are, from left, Harper Babb, Mason Bailey, Griffin Yost and Sybaris Pope. Explaining this aspect of the project, Griffin said, “We picked the person who inspired our life and made a difference and wrote them a ‘thank you’ card, and at the end, we’re handing them the ‘thank you’ cards that we wrote them.” 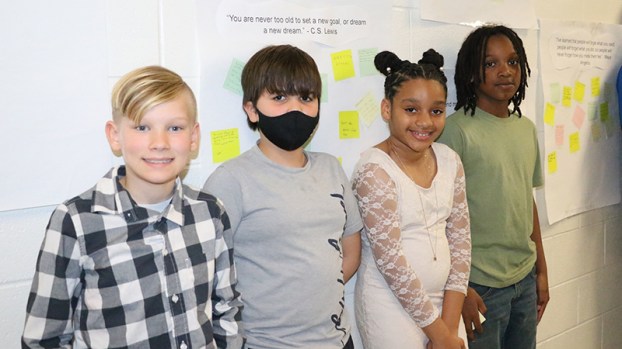 From left, Nolan Hove, Carlos Sanchez, Victoria Jones and Ilijah Davis help present some of the quotes on the wall behind them that they and their fellow Carrsville Elementary School fifth-graders analyzed at the beginning of the project. 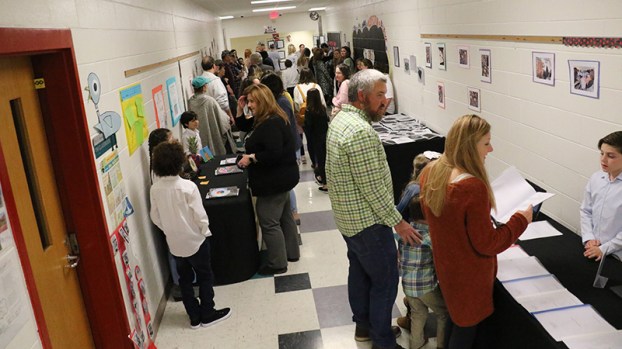 Parents and those attending the fifth-grade expo Feb. 22 at Carrsville Elementary School stop by tables where the students explain and showcase different aspects of the “It’s Great to be You!” project that they had been working on for the past several weeks. 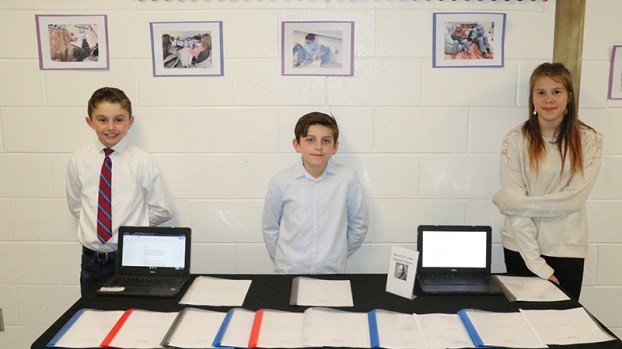 Showcasing their class’ C.S. Lewis research papers and what went into preparing them are, from left, Nicholas Slaba, Conner Creason and Aislynn Posey. Posey said something that stuck with her from her research was “that ‘The Magician’s Nephew,’ the first book of the series of The Chronicles of Narnia, was based off how (Lewis) couldn’t save his mother, but the boy in the book could. (Lewis’) mother had grown ill from cancer. She died when he was 10.” 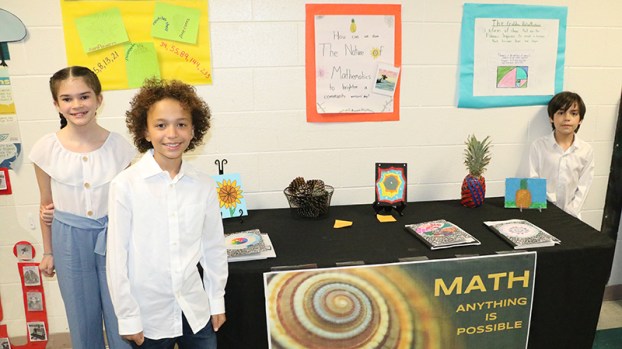 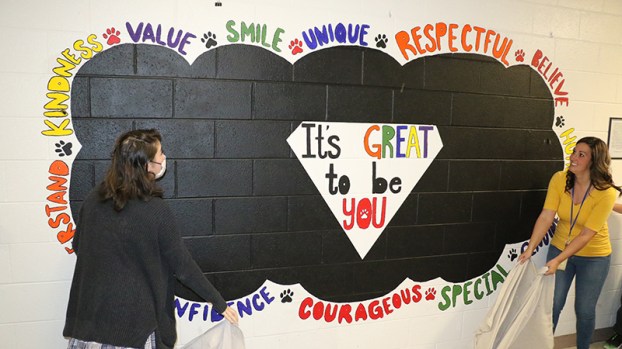 Carrsville Elementary School Art Teacher Hope Kinard, left, and Fifth-Grade Teacher Courtney Berard unveil the Kindness Mural that served as the climax of the “It’s Great to be You!” project. Kinard worked with students on the design and painting of this mural that will live on at the school after this fifth-grade class moves on to middle school. 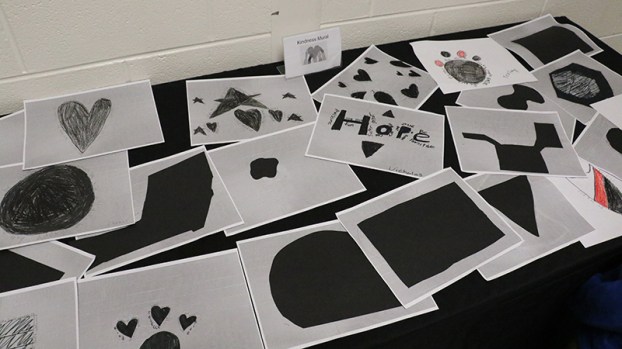 Pictured are drafts of the Kindness Mural that were on display. Teacher Darnelle Kellison explained that each student supplied a drawing representing their idea of what the mural could look like. Then each fifth-grade class voted on their favorite, and Art Teacher Hope Kinard combined the two winning designs to put together the final result. 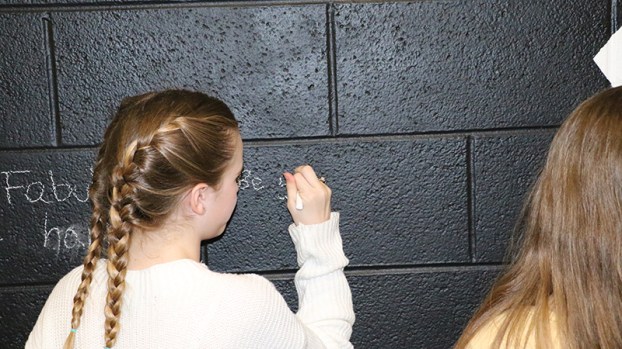 Carrsville Elementary School student Madison Lacey puts an encouraging message on the chalkboard Kindness Mural that she and her fifth-grade classmates helped create. 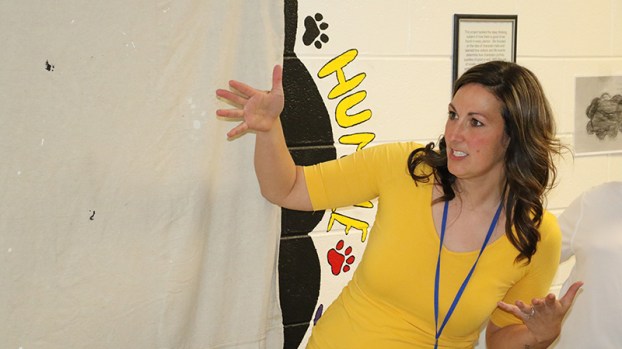 Carrsville Elementary School Fifth-Grade Teacher Courtney Berard says a few words about the Kindness Mural before unveiling it with Art Teacher Hope Kinard. Fifth-Grade Teacher Darnelle Kellison described Berard as the “brainchild” of the whole “It's Great to be You!” project. 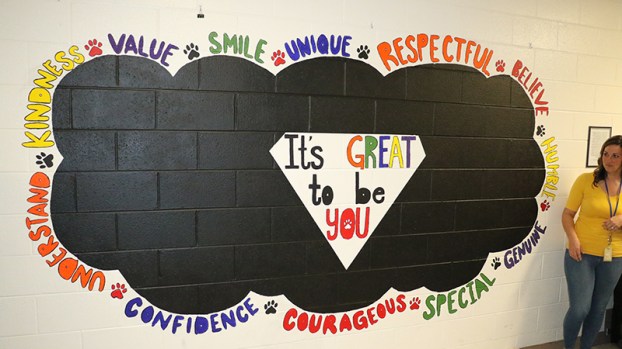 Carrsville Elementary School’s fifth-grade students worked with Art Teacher Hope Kinard for six weeks to create this chalkboard Kindness Mural that was the culminating punctuation mark to the “It’s Great to be You!” project 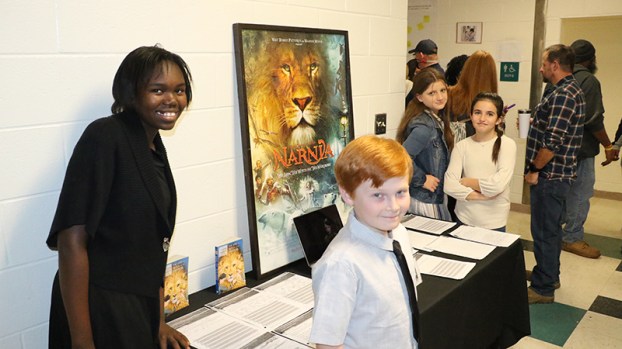 From left, Ja'Nyah Ruffin, Jason Copeland, Caroline Holt and Morgan Brinkley work at the expo’s Movie vs. Book station, where they showcased how students compared and contrasted the two versions of C.S. Lewis’ “The Chronicles of Narnia: The Lion, the Witch and the Wardrobe.” 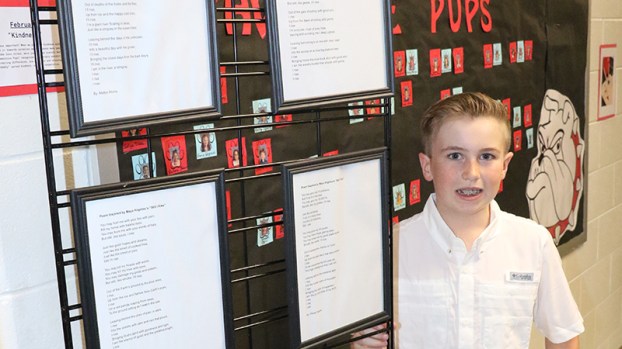 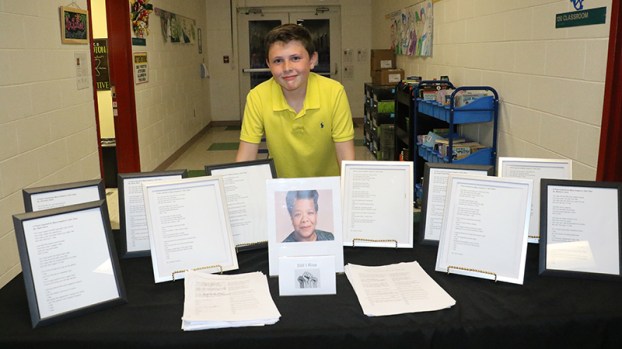 Carrsville Elementary School student Mattox Morris presents the poems that he and his classmates wrote. Fifth-Grade Teacher Darnelle Kellison explained that students wrote their own version of Maya Angelou’s poem “Still I Rise,” using Angelou’s same rhyme scheme, rhythm and tone. Mattox said, “We wrote one stanza for each day, and it took us a week and a half.”

The fifth-graders at Carrsville Elementary School put on an expo Feb. 22 that showcased their work in connection with a project titled “It’s Great to be You!”

The project began with teachers posing some key questions to the fifth-grade students led by this question: “Is everyone born good?”

Describing the emphasis of the project, Darnelle Kellison, a fifth-grade teacher at the school, said, “Our focus is on how we are all born good but have life events that affect our perspectives and often affect how we feel about ourselves and others,” she stated. “We took this theme and connected it to text and research as a way to infuse our reading and writing skills.”

The project branched off into a variety of assignments for students, but each of those assignments was in service of the theme.

Two authors students studied for the “It’s Great to be You!” project were C.S. Lewis and Maya Angelou. Students analyzed quotes from Angelou and Lewis and shared what those quotes meant to them.

Students compared and contrasted the movie and book versions of Lewis’ novel “The Chronicles of Narnia: The Lion, the Witch and the Wardrobe.”

They learned about Angelou’s life and how she overcame an extremely difficult childhood. Then they wrote their own versions of her poem “Still I Rise,” being careful to use Angelou’s same rhyme scheme, rhythm and tone.

The project culminated in the unveiling at the expo of a Kindness Mural that students helped design and paint on a prominent wall inside the school.

Kellison noted that the project stemmed from the mind of fellow Fifth-Grade Teacher Courtney Berard.