Defining the community of Gum 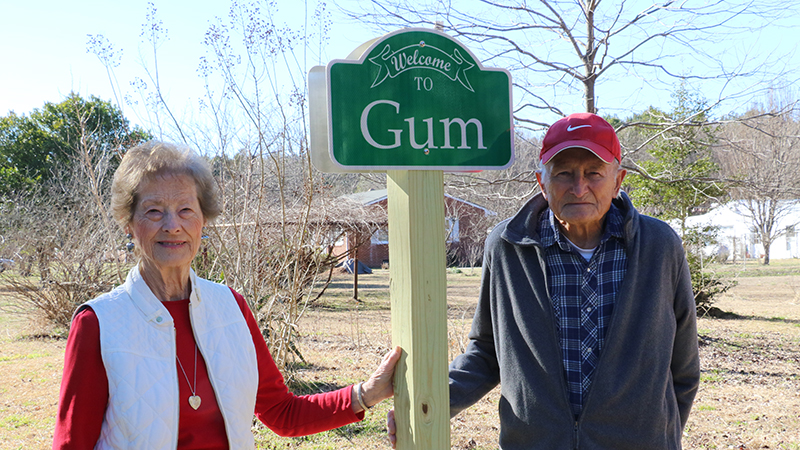 Edna and Norman Porter present the sign on their property that their daughter and son-in-law purchased and installed for them to highlight the small community they live in within Newsoms that gained its name from the gum trees that run up and down the nearby railroad tracks.

A tiny community within the town of Newsoms finally received formal acknowledgement along the roadway in 2022 when Renee Lassiter, together with her husband Clete, installed a sign on her parents’ property that says, “Welcome to Gum.”

Renee explained that Gum is a community located between Newsoms and Franklin that runs from her parents’ house on General Thomas Highway up to Cypress Bridge Road, which turns into South and then North Main Street, an eighth of a mile away.

The community draws its name from the gum trees that are abundant in the area, running up and down the nearby railroad tracks.

“There was a post office down here at one time,” Renee’s father, Norman Porter said. “I think the train stopped here too.”

Renee said the area is acknowledged on some maps as Gum, and her mother, Edna Porter, noted that when the weather is being reported on the news, “They say, ‘The weather at Gum.’”

“But there’s never been a sign from the (Virginia Department of Transportation) put out here at all,” Renee said. “And so we just took it upon ourselves to go, ‘We’re just going to go and buy one.’”

She said she and her husband purchased a two-sided, reflective sign from TrafficSigns.com as a Christmas gift.

Gesturing to her husband, Edna said, “It was his Christmas present, and he was tickled.”

“I couldn’t imagine what it was until I opened it,” Norman said.

Some aspects of Gum are fairly informal, so the Porters have enjoyed defining those characteristics on their own.

The question arose of how exactly to classify Gum, which exists within the town of Newsoms, which is within Southampton County. When it was suggested to call Gum a community, Edna said, “You could call it a community. That would be good.”

Edna also has come up with a method of determining Gum’s population.

“Anybody that could look out there, in their yard, and see our house, I figured they’re a member of Gum,” she said.

This means that as of February 2022, Gum, with nine homes, features a population of 21 people.

“We almost put that (population) on the sign, like have a rotating number on it,” Renee said amid laughter.

Edna was born in Isle of Wight County, and Norman was born in Newsoms. Norman attended Newsoms High School, while Edna went to Windsor High School, and it was in high school that they started dating.

In the early 1960s after getting married, they were scouting out a place to live, and they explained what drew them to Gum.

“It was just close to where (Norman) grew up in this area, and he didn’t want to leave Newsoms,” Edna said.

“Yeah,” Norman said. “I was born within three miles of here up on the hill.”

In 1963, they worked to clear their property in Gum that was quite wooded at the time. They started building their house in March 1964 and then moved in Nov. 1 of that same year.

Their little piece of Gum has proven to be a great home for them and their family. Edna, who has long been a homemaker and stay-at-home mom, and Norman, who retired from Union Camp in 1997, have been able to significantly take advantage of Gum’s great soil in recent years with their green thumbs in the categories of violets and gardening, respectively.