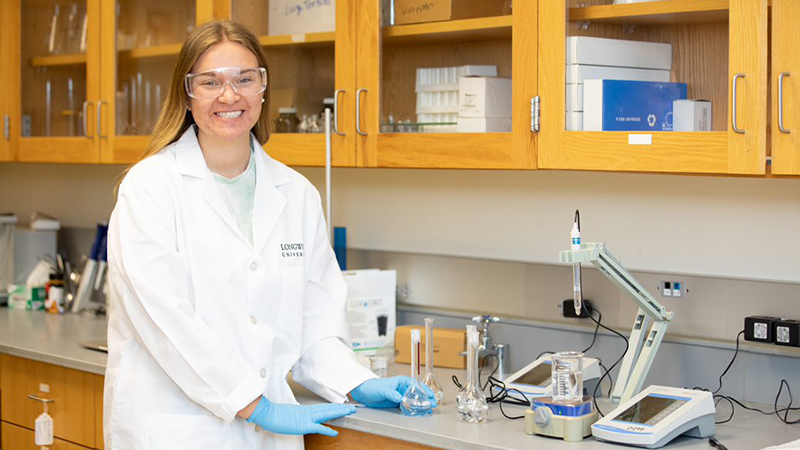 When Kaleigh Beale attended Carrsville Elementary School, she noticed something odd about her classmates.

Some of them had brown stains on their teeth.

“My parents always told me it was because of the well water that they drank, but that since we used a water filter, my teeth would not be stained,” said Beale, now a senior chemistry major at Longwood University in Farmville.

After third grade, she moved with her parents to Chesapeake, where her new classmates’ teeth weren’t stained.

It wasn’t until her junior year at Longwood that she learned what was making the difference: fluoride.

“Fluoride is not a common water contaminant that people are concerned about removing,” Beale said.

In fact, it’s added to most municipal water sources at low levels to help protect residents’ teeth against cavities. But it can also occur naturally in groundwater.

Water that contains too much fluoride can cause dental fluorosis in children – the official term for the brown staining Beale observed. Many Isle of Wight County residents get their drinking water from untreated private or municipal wells, making dental fluorosis a recurring problem.

According to a notice Isle of Wight County sent to users of its Carrsville well system, the water serving the unincorporated community and Beale’s former school tested at 3.84 milligrams per liter of fluoride in 2020 – just under the 4 mg/L legal limit set by the U.S. Environmental Protection Agency. Anything over 2 mg/L can lead to dental fluorosis in children ages 9 and under, it warns, while concentrations over 4 mg/L can increase the risk of developing bone disease later in life. The World Health Organization recommends an even lower safety threshold, at 1.5 mg/L.

For her senior thesis, Beale is researching lower-cost methods of testing for fluoride and removing the excess. Her work has attracted the attention of the Council on Undergraduate Research, which has invited her to present at the “Posters on the Hill” conference this April.

The conference will afford Beale the chance to connect with members of Congress, making her one of only 60 undergraduate students nationwide chosen for the opportunity this year.

“I was one of at least four (Longwood) seniors to apply for this conference and was shocked when I was the only one to receive an acceptance email,” she said.

Last semester, she worked with Dr. Sarah Porter to analyze water samples from the county using standard and alternative methods. Porter, a professor of analytical chemistry, is serving as Beale’s advisor for the project.

In the town of Windsor, which operates two municipal wells and does not treat its water, Beale found fluoride concentrations of 3.2 mg/L at a public site and 3.8 mg/L at a residence. A residence in the unincorporated Zuni community also tested at 3.8 mg/L. A commercial site in the town of Smithfield, which operates a reverse osmosis water treatment plant to remove excess fluoride and other contaminants, tested at 1.22 mg/L.

Water at her grandmother’s house, located about three miles outside of Windsor, tested at 5.3 mg/L – well above the legal limit. In the town of Farmville, where Longwood is located, tap water tested at 0.3 mg/L for fluoride.

The standard testing method, she explained, consists of a $375 probe and an electrode/pH meter that can cost anywhere from $150 to $1,500. Together, the devices are known as a fluoride ion-selective electrode.

“We have ruled out at-home test strips, as they were vastly inaccurate, and found holes in previous research methods using turmeric and curcumin, a chemical found in turmeric,” Beale said.

She then tried using cyanine dye and zirconium, which changes colors based on the concentration of fluoride in the water sample. That method delivered “promising results,” she said.

This semester, she’s turned her attention to lower-cost fluoride removal options – experimenting with the filtering properties of carbon and aluminum.

While water pitchers advertised specifically to filter excess fluoride “are not commonly produced,” Beale said, she and Porter tested multiple water pitcher filters and found that “the Amazon Basics brand does, in fact, remove fluoride.”

The average under-the-sink fluoride filter, by comparison, costs $200, and can range in price to more than $600, Beale said. Some also only remove fluoride, chlorine and lead – leaving the consumer exposed to other possible contaminants.

“While the county of Isle of Wight is near and dear to my heart, and my inspiration for this project, fluoride contamination in water is a global issue with significant problems in India,” Beale said. “A lower-cost method would benefit my local community and lower-income communities across the globe.”

“I am extremely honored to have been chosen to present at the Posters on the Hill conference this April, and could not have made it this far without the support from faculty members at Longwood, especially my research advisor, Dr. Sarah Porter,” she added. “My main goal throughout this project has been to aid members of a community that has given me and my family so much, and I am overwhelmed with joy at the chance to make a difference.”

After she graduates this spring, Beale plans to take a gap year before applying to medical schools, and return to the Hampton Roads area to become a certified emergency medical technician. She hopes to eventually become a pediatric emergency medicine physician.