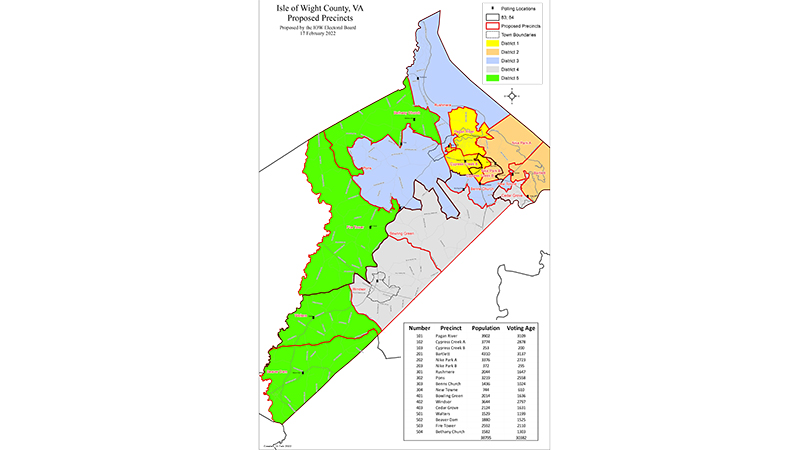 Isle of Wight County renumbered its voting districts and made changes to its voting precincts on March 3 to better align with Virginia's system and recent statewide redistricting. File photo

Isle of Wight County has scheduled a March 3 public hearing on a series of proposed changes to its voting districts and precincts, which would include renumbering them.

The Board of Supervisors had voted in December to adopt new voting district boundaries based on 2020 census data, and replace the old districts’ names with numbers. The former Carrsville District became “D1,” Windsor became “D2,” Hardy “D3,” Newport “D4” and Smithfield “D5.”

But, according to Caleb Kitchen, vice chairman of the county’s electoral board, the five districts were already numbered one through five in the state’s computer system, and not in the order the county had picked.

“Every precinct in the county has a designated name and a number,” Kitchen said.

The “1” in the state system’s “101” and “102” designations, Kitchen explained, refers to Smithfield as District 1, since both precincts are located in that district. Under the proposed changes, Isle of Wight’s maps would be adjusted to match the state’s system, making Smithfield “D1,” Newport “D2,” Hardy “D3,” Windsor “D4” and Carrsville “D5.”

As a general rule, he explained, all voters assigned to a specific precinct must use the same ballot. Under the district boundaries Isle of Wight adopted in December, eight precincts would be split between the state Supreme Court’s newly created 83rd and 84th House of Delegates districts – necessitating two separate ballots come the next election cycle for those legislative seats.

The number of split precincts can be reduced from eight to two by making minor adjustments to Isle of Wight’s district boundaries, Kitchen said. The two remaining split precincts — Cypress Creek and Nike Park — could then become “A/B precincts,” where each polling site would have two separate voting stations, each with its own check-in computers, reporting forms and ballot-counting machines.

Per federal and state constitutional requirements, voting districts must be more or less equal in population, be contiguous, compact and not discriminate based on race. Ideally, each district would have 7,759 residents based on a total county population of 38,795.

The county’s December map had a total deviation of roughly 5.85% between the most and least populated districts. Districts are allowed to deviate up to 5%, meaning 2.5% up or down from the ideal population, though deviations of up to 10% may withstand challenges. Under the revised map, the deviation would increase to 7.92%.

The revised map also increases the voting-age minority population of District 3 from 50.3% to 50.7%. Per the federal Voting Rights Act, there must be at least one minority-majority district based on the ratio of white residents to people of color, and whether voters consistently vote to defeat minority candidates.

Once Isle of Wight’s voting districts are finalized, the county registrar’s office will mail updated registration cards informing voters of their new district and precinct.