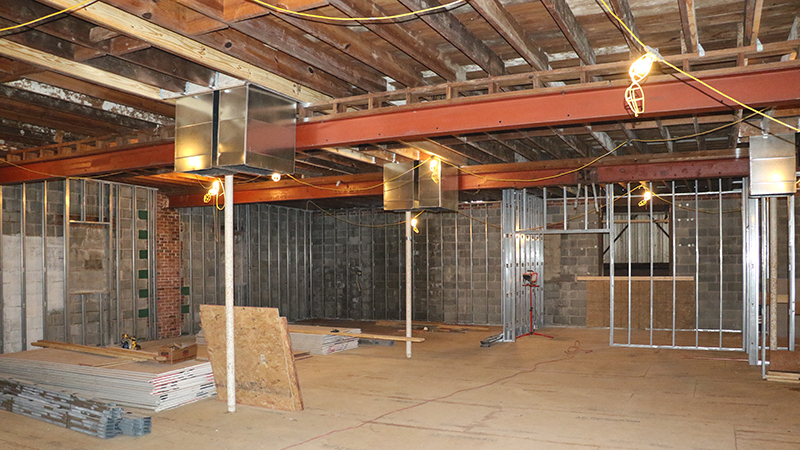 This photo shows the construction progress that had been made as of Feb. 9 on the second story of the Foodbank of Southeastern Virginia and the Eastern Shore’s Western Tidewater Branch and Community Produce Hub. The branch and hub, located at 618 South St. in Franklin, is estimated to be open and operational by July 1.

Construction on the Foodbank of Southeastern Virginia and the Eastern Shore’s Western Tidewater Branch and Community Produce Hub has passed its midpoint and has been proceeding well, with little incident.

When it is ready, this two-story facility at 618 South St. in Franklin will become the focal point of the Foodbank’s efforts in the area to address food insecurity and its root causes.

“But again, back to Bob’s point, supply and demand and the supply chain has been a little bit of a challenge, which has put us back,” she said. “We’re pushing really hard to get everything completed by July 1 and be operational. So that’s kind of our target opening day.”

Though the supply chain has been a factor, Latvis said the issues related to it have been minimized by the Foodbank ordering items early.

“We were just following the trends, knowing where we wanted to be, and that gave us a clue,” he said.

He pointed out that the elevator pits have been dug out at the facility, and there is a six-month wait time for the elevators, but the Foodbank ordered them many months ago, so they were not being reported as items that would delay the branch and hub’s launch.

Good timing of ordering has also helped the Foodbank save on costs.

“Our HVAC system, you can see pieces of it have already been installed here, but there’s still a tremendous amount to be delivered, and we had to pay for that months ago,” Latvis said during a Feb. 9 tour of the facility, adding that the price of these HVAC materials has since gone up 40%. “Even plywood, like we’re walking on, it’s amazing how fast it’s going and how steadily the price is increasing and not over months — over weeks.”

But Latvis affirmed that aside from the supply chain issues, the construction process has been fairly smooth.

“We’ve had great cooperation from the city, with permitting and inspections,” he said. “It’s been a wonderful partnership there. It’s an old building, so there have been some surprises but nothing that’s been any showstoppers yet.”

One of the biggest developments in the construction process around its midpoint was the enclosure of the warehouse space. Previously, there were no walls there, and the ceiling was in need of patching and repair.

There will be 5,000 square feet of space to stock food, and one corner of the warehouse will feature a walk-in freezer and refrigerator.

Describing the overall state of the branch and hub during the Feb. 9 tour, Latvis said the warehouse was enclosed, and the framing was complete, though he noted the facility had not been sheetrocked or mudded over yet.

Gesturing to some workers on-site as he spoke, Latvis said, “It’s being roughed in electrical right now, so that’s what these guys are doing here.”

He said the branch and hub is expected to be fully operational July 1 except for the commercial kitchen, depending on which way the Foodbank decides to go with that.

“We’ll be able to serve meals out of this building, for sure, but in terms of prepping them here and all that, we’re still deciding on how we want to handle that,” he said. “We are going to serve either pre-prepared meals that you can take home and that are frozen, you can cook at your home, or we’ll have a way here to heat them up and serve at our cafe here.”

Day emphasized that fresh produce and frozen meats will also be available.

Foodbank Senior Director of Communications David Brandt said, “What we’re doing here is the new model for food banking where you have client choice.”

He said people who come to the branch and hub for food will not be standing in a line all the time.

“They can come in and they can shop like they’re in a market, and they choose what they want,” he said. “It gives them a lot more dignity and more of a friendly, warm, personal experience. So that’s our new model that we’re going toward.”

Latvis said the second story of the facility is expected to be 100% operational by July 1. That floor will be dedicated to addressing the root causes of food insecurity, helping people to become self-sufficient, no longer in need of the Foodbank.

Brandt noted that the upstairs space can also host health screenings and that the Foodbank has plans to work with Camp Community College to offer some continuing education opportunities.

Latvis highlighted a room upstairs that will be a state-of-the-art computer lab, where people can learn computer literacy and access resources online, like banking.

“They do have internet service here in Franklin, but quite honestly, I don’t know how many of the residents actually have it in their homes at $80, $90 a month,” he said. “But we’ll have it here.”

Brandt said, “We basically want to be a place where people who feel like they don’t have any options find out they have many options.”

Latvis made a point to say that participating in the offerings on the second floor is not required in order to receive food at the branch and hub.

“We don’t want to turn people away and create the perception that you have to participate in something to get something,” he said.

Day stated that the services found upstairs are simply a value added to the food distribution happening on the ground floor.

“If you’re hungry, we’ll feed you,” Latvis said. “If you want to learn more about how to get out of the food insecure space, we have these options that we’d love to educate you on. The ultimate measure of success is I put myself out of a job as the operating officer for the Foodbank.”

Both Latvis and Brandt highlighted how the Foodbank is putting forth significant effort to create a warm and inviting environment at the 618 South St. facility so it becomes part of the community as opposed to just an entity within the community.

“We will have staff on hand, but we really want the community and community volunteers to embrace it as their own, and that’s the key to this whole thing,” Latvis said.

As Latvis and Brandt walked alongside the building after the tour Feb. 9, they greeted a couple of community members who were passing by. One of the community members said, “Y’all are getting the building together, and I thank y’all for coming. I’ll be glad when it opens, because I will be coming to see you.”

In unison, Latvis and Brandt happily replied, “We’re looking forward to it.”