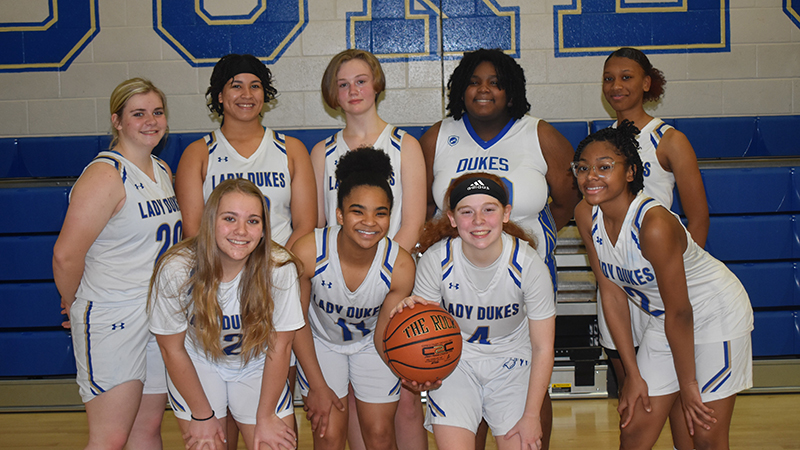 The 2021-22 Lady Dukes have reenergized the Windsor High School varsity girls basketball program, upending a recent history of losing seasons by finishing their regular season schedule with a 15-3 overall record.

Windsor closed its regular season play Feb. 9 with a 55-17 rout of host Appomattox Regional Governor’s School to finish 13-3 in the Tri-Rivers District.

The Lady Dukes were set to host Franklin High School in the first round of the district tournament Feb. 11.

Lady Dukes Head Coach Wilhelm Johns said he foresaw this season’s team being much better, but he said he did not expect the Lady Dukes to be this great so soon.

It was announced Feb. 10 that Brown was named Tri-Rivers District Player of the Year. She made the all-district first team with Stephenson; Carr and Kea-Towns made the second team; and Warren received honorable mention.

Johns, in his third year coaching the team, was named district Coach of the Year.

“My first season we went 2-14,” he said, noting that the team was quite young, with ninth- and 10th-graders and only one junior.

His second season was the abbreviated COVID season, during which the team went 0-3.

“Then we came upon this season and didn’t know what we were going to have, didn’t know who was going to come out, and the first day of practice, me and the coaches were looking, and we’re like, ‘Hmm, we’ve got something here,’” Johns said.

However, he noted that it took awhile for the 2021-22 squad to gel. Among the obstacles to finding that chemistry early were the fact that he also had football-coaching duties; he did not have a junior varsity girls basketball coach earlier; and he and the varsity girls did not do much offseason training.

“I had the girls in the weight room maybe a couple days that summer, but that was pretty much it, so it took a while for us to really gel and get to the point we are at now, but it’s coming along at the right time,” he said.

Of the Lady Dukes’ three losses, two happened when they were missing at least one starter.

“We really only lost one game at full strength,” he said.

The Windsor starting five has been led by Brown, who averaged 18 points, 10 rebounds, five steals and two assists per game in the regular season.

Johns said Kea-Towns and Warren round out his starting five.

“Basically all my tough girls on defense, they don’t score a lot, but they put a lot of pressure on the ball, and they harrass people all night long,” he said.

He noted that the varsity team features a roster of 10 girls, and everyone on it contributes in their own way.

“We really have come around,” he said. “My first season, I can remember getting beaten 90-6, so it’s come a long ways, and I appreciate the hard work the girls put in this year. I appreciate my coaches.”

He also praised the 2021-22 JV girls team, which went 4-2, putting together its first winning season in years.

The varsity Lady Dukes hold the No. 2 seed in the Tri-Rivers District Tournament.

“In the district, everybody didn’t get to play all their games,” Wilhelm said. “We played all our district games, all 16; we went 13-3. Greensville (County High School) only played 12, and they went 10-2, and they went by winning percentage for the regular season title, so they out-pointed us. I think they were .818, and we might have been .816.”

With a win Friday, Windsor would be set to play at home Feb. 14 in the tourney semifinals. The title game will be played Feb. 15, hosted by the highest seed.