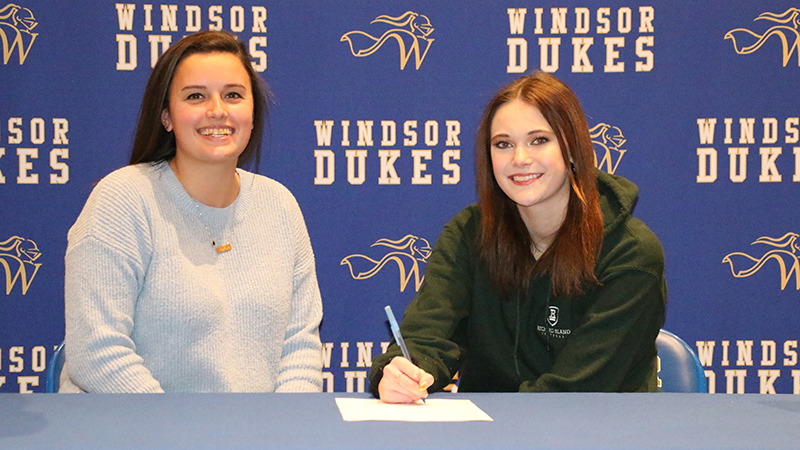 Windsor senior softball standout Madison Lowe, right, smiles for a photo at her Feb. 3 signing ceremony, sharing a moment with Brooke Sutphin, who has been her softball coach at Windsor High School. Lowe has committed to attend and play softball for Richard Bland College.

Windsor High School senior Madison Lowe will be taking her talents on the softball field and in the classroom to Richard Bland College after she graduates from Windsor later this year.

Lowe formalized her commitment to the Statesmen on Feb. 3 with a signing ceremony at Windsor High School that included her family and coaches.

She got her start in softball when she was 4 years old, playing for the Windsor Athletic Association, and she said the idea of playing college softball probably first came to her mind when she was as young as 8.

“I’ve worked for it my whole life, and being able to continue playing at the collegiate level is something I’ve always wanted to do, so (signing) means a lot,” she said.

When it came to choosing a college destination, Lowe said she really liked the idea of starting off at a two-year school.

“It seemed like a really good fit for me,” she said. “I’ve been on campus (at Richard Bland), and I loved it, and after that, I was like, ‘OK, yep, this is where I’m going.’ This was the first campus I toured.”

She noted that in establishing a connection with the college’s softball team, she emailed Richard Bland College, and its coaches saw her play, and “we just went from there.”

In addition to starring for Windsor, Lowe also plays for the Richmond Ruckus travel softball team.

Chris Brandt, Lowe’s head coach with the Richmond Ruckus, said the travel team had some other players that now go to Richard Bland.

“It puts a lot more of the girls on the radar if someone else already goes to that school,” he said, but he added that Lowe was also able to perform in front of Statesmen coaches — “and they liked what they saw.”

Lowe’s parents, Jeremy Lowe and Jackie Hines, both have coached her and were on hand for her signing. They shared what it meant to be able to see her reach this milestone.

“Proud of her,” Jeremy Lowe said. “I always want my kids to do better than myself. I didn’t go to college.”

Referencing tournaments, games and practices, Hines said, “I’ve been the one to take her to pretty much almost everything, and just the rides there and the rides back and to hear her talk and to be able to see her dreams actually come true and everything she’s worked for, it just makes me really proud.”

Brooke Sutphin, who has coached Madison at Windsor, said she was not at all surprised that Madison was signing to play at the next level.

Recalling Madison navigating the WAA ballfield as a little girl, Sutphin added, “I think that softball has always been a passion and something that she dreamed to do, so I’m excited for her to be able to achieve that. And I know that she’ll do good things when she gets (to Richard Bland) because she definitely has pulled through for (the Lady Dukes).”

Madison, who stars in the outfield for Windsor, said Richard Bland coaches have indicated that they will be utilizing her as an outfielder and batter, and she is also expecting to do some pitching.

About two years ago, Madison moved to the left side of the plate as a batter, expanding what she can offer a team offensively.

Academically, Lowe plans to earn an associate degree in science while at Richard Bland, and after that, she is planning to further her education in chemistry and criminal justice and continue her softball career at a four-year school.

At her signing ceremony, Lowe expressed gratitude to her coaches and parents for pushing her forward in softball, helping her reach her current level of success.

“There were points where I felt like I wasn’t getting any better, I wanted to quit, and they kept on pushing me,” she said.

During the ceremony, Windsor Athletic Director Chuck Parrish thanked her for how she has represented the high school during her tenure there and said the school is looking forward to her senior season on the diamond this spring.