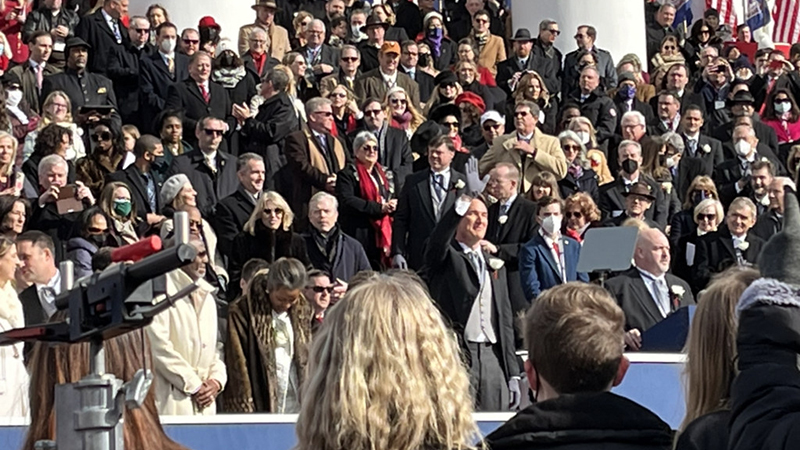 Gov. Glenn Youngkin waves to the crowd Saturday at his inauguration as Virginia’s 74th governor on the steps of the state Capitol. (Josephine Walker/CNS)

By Tarazha Jenkins and Josephine Walker

Republican Glenn Youngkin was sworn in Saturday as Virginia’s 74th governor on the steps of the state Capitol.

The commonwealth also made history in electing Republicans Winsome Sears as lieutenant governor and Jason Miyares as attorney general. They are the first Black woman and Latino man to hold statewide office, respectively.

“The people of Virginia just elected the most diverse leadership in commonwealth history,” Youngkin said in his inauguration speech, “sending a message that Virginia is big enough for the hopes and dreams of a diverse people.”

Sears emigrated from Kingston, Jamaica at 6 years old. She made history in 2001 as the first Black Republican woman to win a House seat, and she did so beating out a Democratic incumbent in a majority Black district.

“It actually encouraged me to do what I wanted to do,” said Jeanette Harris-Robinson, who is originally from Jamaica. She traveled from Florida to support Sears, who is her cousin.

“I was a little bit afraid of actually moving forward, because I want to run for [office in] the city of Florida, for my city,” Harris-Robinson said. “Coming out here and seeing my cousin and looking at her — it just opened up a whole new world.”

The 30-degree weather didn’t seem to impact turnout. Roughly 6,000 people were expected to attend, many who dressed in their Sunday best to watch the inaugural ceremonies.

Dan and Debbie Robinson are small business owners who traveled to Richmond from Prince George County to show their support.

“It’s been an interesting couple of years for running a small business,” Dan Robinson said.

“It’s nice to be a part of history as well,” Debbie Robinson added.

The Robinsons own ByreBarn, an animal auction website. The couple said they look forward to seeing how the new administration changes agricultural regulations.

“The governor seems very positive in all he says,” Dan Robinson said. “Hopefully he can work with a lot of people.”

Youngkin will lead a divided government, with a slim majority of Republicans in the House of Delegates and Democrats narrowly in control of the Senate.

“My fellow Virginians, the spirit of Virginia is alive and well,” Youngkin said. “And together we will strengthen it.”

A parade with organizations ranging from law enforcement to STEM education was held after the inauguration ceremony. The Virginia Union University choir performed a song they wrote for Youngkin, which touched on the theme of Virginia united to “rebuild and reimagine” the state’s future.

“Together we’ll renew the promise of Virginia, so it will be the best place to live, work and raise a family,” he said.

The first order prevents the use of “divisive concepts” in education, including critical race theory. Youngkin’s campaign centered on ending critical race theory in public education. The theory is not currently taught in K-12 public schools but became a contentious talking point during the gubernatorial race. There will be a review of all policies to identify and end “inherently divisive concepts.”

The second order eliminates a statewide mask mandate in schools beginning Jan. 24, although school divisions in many parts of the state with local mask mandates for their students said they were taking stock of the decision and evaluating how to move forward. Youngkin also signed a directive eliminating the vaccine mandate for state employees. The moves were made a day after Virginia reported over 17,000 new cases of COVID-19.

The new governor has more planned in alignment with his campaign promises.

“It’s a new day in Virginia, but the work is only beginning,” Youngkin stated.