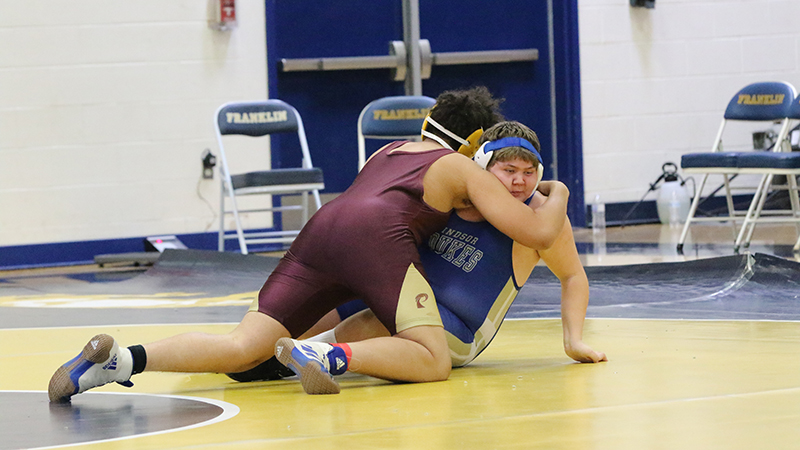 The 2021-22 Windsor High School varsity wrestling team is a young one, but growth has been evident, with some of the most recent evidence coming Jan. 15 at the Matt Bryant Memorial Duals in Franklin,where the Dukes’ three youngest wrestlers competed.

“I felt we did well for the three wrestlers that were able to participate,” Windsor Head Coach Sumner Bradshaw said. “The athletes that were there all showed a great amount of improvement, and Robert Gurin, our heavyweight, picked up his first win by points in a very intense match that went the full six minutes. It was the last match of the day for us, and he was able to win that match in the last 10-15 seconds of the final round.”

Gurin was joined at the duals by his two fellow freshmen on the Windsor team — Sean Mittler and Nicolas “Ryan” Stephens.

“Our team is very young,” Bradshaw said. “There are only two athletes that wrestled in previous seasons, senior Kibwe Noel and sophomore Jessica Butler. Taking that into consideration, we are in a building year but have seen a great improvement in the new athletes since the beginning of the season. Myself and my assistant coach, Robert Gurin, are very proud of the progress they have made so far.”

Bradshaw noted that Windsor’s two main standouts this season have been Noel, who has a 9-7 record, and West, who is 11-7.

“Our goal for the remainder of the season is to focus on keeping everyone healthy and conditioned in an effort to take as many to the state tournament as possible,” the coach said.