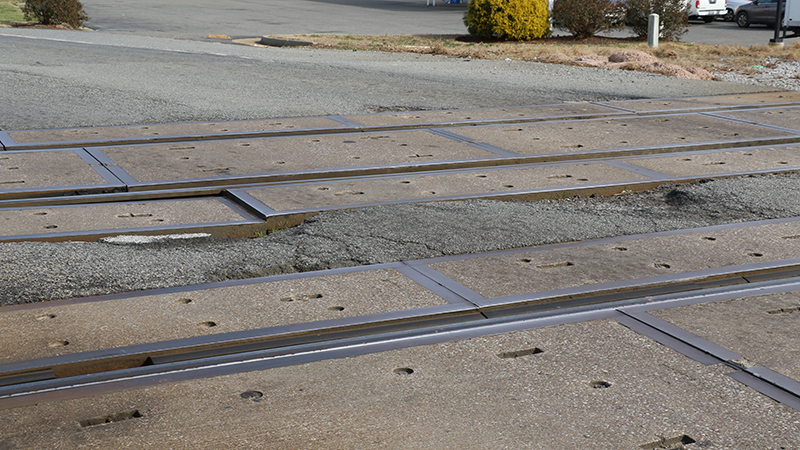 One of the sinking spots in the railroad crossing on U.S. Route 258 in Windsor seems to have affected a piece of the railroad equipment, causing that piece to be noticeably out of alignment compared to the others.

Norfolk Southern is aware of concerns with the railroad crossing on U.S. Route 258/South Prince Boulevard just past Dairy Queen, Exxon and Burger King in Windsor, and the railroad corporation is set to repair it in the February-March time frame.
Windsor Town Manager William Saunders said the crossing has been a notable subject of citizen concern.
“In the last year, town staff have forwarded numerous complaints from citizens to the railroad (company) in regard to the failing crossing on Route 258,” he said.
He added that all of the complaints regard the section of the crossing that is sinking and causing a depression in the roadway.
A visual inspection of the crossing reveals multiple sinking spots in the roadway between the railroad tracks. One of the spots seems to have affected a piece of the railroad equipment, causing that piece to be noticeably out of alignment compared to the others.
One of the citizens sharing a complaint was Malinda Leary, who lives between Walters and Windsor in Isle of Wight County.
She indicated that driving over the sinking spots felt like hitting potholes.
She said that when she is driving out of Windsor on that stretch of road, if no one is coming down the opposite lane into town, she crosses over to that side to avoid the worst of the sinking spots.
“If I were working every day and traveling that way and that was the only way that I could get to Windsor, that would tear your front end up,” she said of driving over the spots repeatedly.
Connor Spielmaker, Norfolk Southern media relations manager, made it clear that the citizen complaints had been heard and that the corporation is taking action to resolve the issue.
“We’ve been made aware of the concerns with this crossing, and it is scheduled for repair as part of a traveling crew that will be in the area in February/March,” he said. “We will work with VDOT and whoever else locally to temporarily close the crossing for the repairs once we have a more precise window and can ensure an asphalt plant will be available to provide asphalt.”
He noted that what goes into the repair depends on what exactly is under the surface of the crossing.
“Typically, these types of crews will replace ballast that supports the track, replace ties and repave the crossing,” he said.
He added that the repair itself typically takes less than 24 hours to complete.