IWCS names teachers of the year 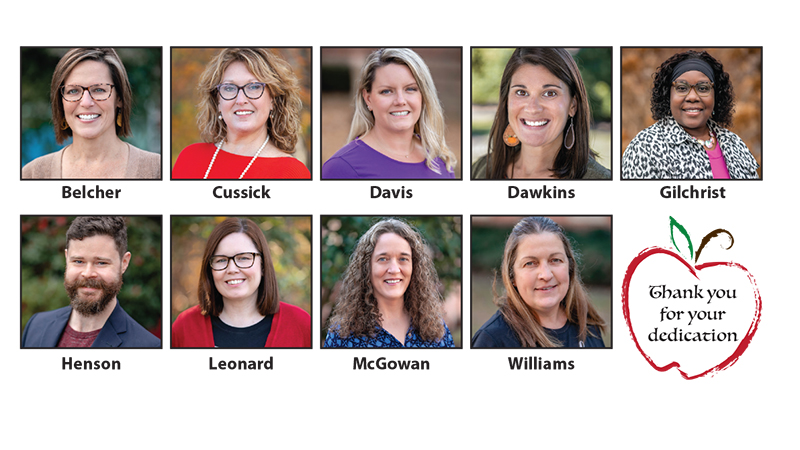 Isle of Wight County Schools has named its 2021-2022 teachers of the year for each of its nine schools.

At Carrollton, she’s worked to provide professional development opportunities to staff as a certified “Handle With Care” trainer, and is currently acting as a mentor for one of Carrollton’s newest special education teachers. She’s lived in Smithfield since 2016 with her husband and two children.

Third-grade teacher Summer Dawkins is in her eighth year as an educator, the past three of which she’s spent at Carrsville. She previously taught elementary special education and first grade.

Dawkins has a master’s degree in early childhood special education from Radford University. She sits on the Parent Engagement Committee, is a member of the Carrsville PTA, and participates in the IWCS strategic planning steering committee. She lives in Windsor with her husband and two children.

Gilchrist provides school-based counseling services in the areas of student academics, personal and social matters and career development — and even does home visits. She’s coordinated projects to support students’ mental health, academic achievements and school attendance, and serves as the 504 committee chairwoman and the school test coordinator for Hardy. She also served on the 2020 IWCS social-emotional learning committee and is a former “Handle With Care” trainer. Gilchrist lives in Isle of Wight County with her husband of 28 years and is the parent of three adult children.

Fifth-grade language arts teacher Katherine McGowan is in her third year at Westside Elementary and her seventh year as an educator. She has a bachelor’s degree from Texas A&M University, where she also earned a commission into the Air Force, and master’s degrees from both Air University and Liberty University.

McGowan is Westside’s Junior Beta Club sponsor, National Spelling Bee co-sponsor, a member of the hospitality committee and served as a Girls on the Run coach last school year. She lives in the local area with her family, whom she often uses in her teaching.

Kindergarten teacher Kimberly Belcher is in her second year at Windsor Elementary and her 19th as an educator. She attended Peace College in Raleigh, North Carolina, where she received a bachelor’s degree, then went on to receive her North Carolina teaching license from Meredith College. She obtained her master’s degree in elementary education with a reading endorsement from ODU.

Belcher served as the kindergarten grade level chair for two years at Windsor and is currently a mentor to a fellow kindergarten teacher. Belcher was born and raised in Newsoms and currently resides there with her husband and daughter, who is now a junior at Windsor High School.

Special education teacher Kimberly Miller-Cussick is in her 13th year at GTMS, and cites her time as a fourth-grader at Windsor Elementary as when she knew she wanted to become an educator. After graduating from Windsor High School, she earned a bachelor’s degree in English from Longwood University and a master’s degree in special education from Regent University, with an additional certificate as a reading specialist. Throughout her career she has taught every grade from preschool through eighth, and in 2008, taught in the same classroom at the former Windsor Middle School where she had attended fourth grade when the building was an elementary school.

At GTMS, she has served as president of the Booster Club, grade level chairwoman and a member of the school’s leadership team. She resides in Franklin with her husband and two sons.

Physical science teacher Angela Williams has spent almost 20 years teaching at Smithfield Middle. She earned a bachelor’s degree in physical education at ODU and a master’s of education degree at Regent University. She has also taken classes from Jefferson Lab for the past nine years to stay current with new science labs.

At SMS, she is the coordinator of Hospitality, Secret Pals, United Way and the annual SMS talent show. She also serves as the SMS representative for Teacher Council. Her classroom often features hands-on experiments. Williams lives in Yorktown with her husband, son and daughter.

Social studies teacher Andrew Henson is in his ninth year of teaching, seven of which have been at SHS. He teaches mainly world history and sociology. He earned his bachelor’s degree in history and his master’s degree in teaching from Christopher Newport University.

Henson currently coaches the five-time state champion SHS debate team. This is his second year as head coach after spending two years as the team’s assistant coach. He encourages his students to ask deeper questions that will lead to knowledge beyond the classroom.

Math teacher Jennifer Davis is in her 25th year of teaching, her fourth at WHS. She earned a bachelor’s degree in mathematics from Christopher Newport University. Students know when Davis is wearing a costume, an exciting lesson is about to begin, whether she is a secret agent and students must break a code to solve a crime, or a pirate when they must find buried treasure by solving for “x.”

Davis is part of the School Leadership Team, serves as a freshman class sponsor, and is a homebound math instructor and algebra Standards of Learning recovery tutor. She also mentors new math teachers. Davis resides in Suffolk with her husband and son, who is a student in the division.