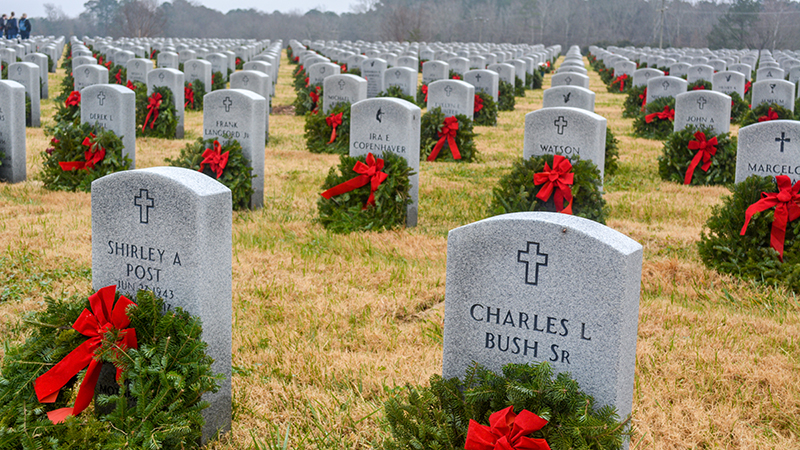 Fresh evergreen wreaths with red bows will adorn all of the graves at Albert G. Horton Jr. Memorial Veterans Cemetery through the holiday season.

Hundreds of volunteers came out on an unseasonably mild day Saturday to make sure that the thousands of graves at Albert G. Horton Jr. Memorial Veterans Cemetery in Suffolk are adorned for the holiday season.

All 11,700 graves featured a fresh evergreen wreath with a bright red bow by the end of the morning. Family members were able to register in advance to be able to place a wreath on their family member’s grave, and a few hundred did so, organizers said.

But for the majority of those buried there, whose families were not able to come Friday or early Saturday, volunteers helped.

Youngsters Mikahla and Caitlin Fowler, of Smithfield, and their friend, Brianna Gue, were stopping and reading the inscriptions on each headstone between wreaths.

“We can honor the soldiers who have died,” Caitlin said about why they were taking their time.

Abbe Little and some members of her family drove from as far as Alexandria to be there for the wreath-laying. It was her first time at the event. They laid a wreath at the graves of her mom and stepfather, who died together in a car accident eight years ago, and then volunteered to lay wreaths at the graves of others whose families could not attend. Her stepfather was a Navy pilot, she said.

“It just felt like the right year to come out,” Little said.

Hailing from North Carolina, sisters Theresa Hardy, of Moyock, and Patricia Tillett, of Manteo, visited the cemetery where their brother, who was in the Army, and brother-in-law, who was in the Air Force, are buried. Both men died in the last two years.

Hardy said they learned about the wreath-laying event when their brother-in-law died earlier this year and thought they should attend.

“We thought this would be something nice to do,” Hardy said. Like many other families, they had spent time at their family member’s gravesite and then started volunteering to place wreaths at others’ graves.

Horton Wreath Society President Mike Yarbrough said the outpouring of support from volunteers every year is impressive to see, even with a modified process this year because of the pandemic.

“The mission was accomplished, and everything looks beautiful,” said Yarbrough, a 22-year Navy veteran who also has 17 years of working for the Navy as a civil servant. “All of the volunteers did a really good job. I appreciate all their time and effort. We really honored our vets.”

Six truckloads of wreaths were positioned throughout the cemetery for people to collect wreaths from. Smaller groups of volunteers had worked throughout the week at the Suffolk National Guard Armory to unbox all of the wreaths, make them look their best, and load them onto the trucks.

Col. Dean Gould, Virginia Wing Civil Air Patrol commander, spoke during the ceremony and encouraged those present to choose a name from a gravestone, go home and look it up on the internet and learn everything they could about that person.

“You’ll find that they were real Americans with families, mothers and fathers, sons and daughters, brothers and sisters, aunts and uncles,” he said. “They were more than just just a statistic.”