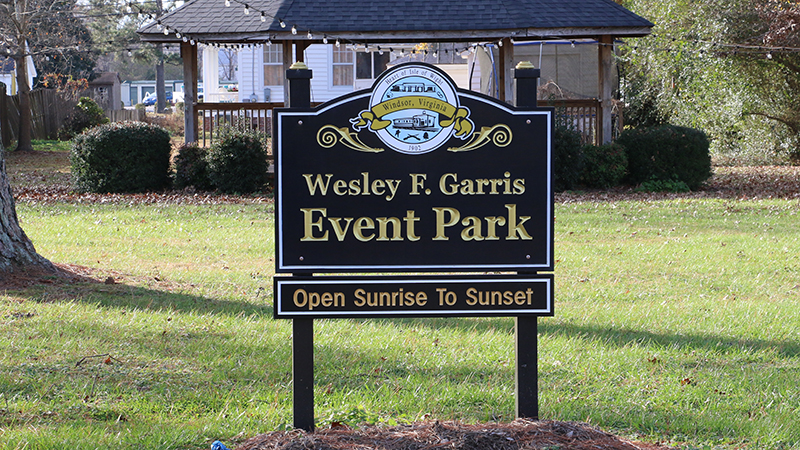 The Wesley F. Garris Event Park sign has an addition as of Dec. 14 that reads, “Open Sunrise To Sunset.” The town made the move in response to concerns expressed by a member of the public that the park was becoming a hub of illegal activity committed by kids gathering there.

The town of Windsor added an “Open Sunrise To Sunset” sign to the Wesley F. Garris Event Park sign on Dec. 14 in response to a request from a member of the public who expressed concerns regarding kids gathering and allegedly participating in drug activity and vandalism at the town gazebo and park pavilion on either side of the library on Duke Street.

Robinson Park, where the park pavilion and playground are located, is maintained by Isle of Wight County, and there is already language on the county’s sign there about that park being open from sunrise to sunset.

In a memorandum to the mayor and Town Council found within the Dec. 14 council agenda packet, Town Manager William Saunders noted that public comments were shared about the event park along with recommendations at the council’s October meeting.

“One of the recommendations was the installation of a sign stating the hours that the (Garris Event) Park is open to the citizenry,” he stated. “Major Signs, of Suffolk, was directed to create and install an addition to the existing event park sign to read, ‘Open Sunrise To Sunset.’”

Designed to match the existing sign with its carved letters and border, the addition cost $475, according to documentation in the council agenda packet.

Saunders reported that there was no substantive discussion among council members following the report on the sign at the Dec. 14 meeting, but he said a couple of statements were made expressing hope that the additional sign’s installation would achieve the results desired by the public speaker that had requested it.

Phillip Barnes was the member of the public who expressed concerns during the public comments portion of the council’s October meeting, saying that the gazebo in Wesley F. Garris Event Park had developed a reputation in the community for being a gathering place of young people who participated in illegal activity there.

“When this was discussed with law enforcement, we were told by them that they have done everything they can do, and to do more they need the proper signage on those sites, such as, ‘No loitering.’

“What we’re asking for the Town Council and mayor to do is put the proper signage there so law enforcement can do what is needed to get this ugly mark off our community and stop it from becoming overwhelming to the point where everyone associates Windsor with the distribution center for drugs,” he said.

Riddle was asked about the signage at the October council meeting, and he said, “You can put signage up. Whether or not it’s enforceable, I think the town would have to adopt a municipal code for loitering. (Town Attorney) Fred (Taylor) may be able to chime in a little more on that.”

Riddle said he has asked for cameras to go up in the area around the library.

“I’ve had a discussion with the (town) manager about that or even putting up some fake cameras over there to try to dissuade some of the behavior,” he said.

At the Town Council’s Nov. 9 meeting, Saunders gave an update on how the town was responding to Barnes’ concerns, noting that his concerns had initiated a lot of conversations among town staff and the police department leading to some potential actions and strategy that could not be divulged publicly. Saunders’ main emphasis, though, was in highlighting efforts to add the sunrise-to-sunset sign.

On Nov. 10, Barnes sent an email to Mayor Glyn T. Willis expressing disappointment with the town’s response to his concerns.

“I attended the meeting last night in hopes of hearing more discussion concerning how Windsor can best address the gazebo issues,” he said Nov. 10. “Unfortunately, I sat there for almost two hours only to hear that signs for the gazebo are being looked into. There were several other options discussed last month, and these were not brought up last night. What is the plan with modifying the town bylaws so the police can do more? Were cameras looked into? These can be placed on top of the library to keep the kids from messing with them.”

He later noted that he spoke with Riddle after the meeting.

“He filled me (in),” Barnes wrote. “The town has increased patrols of the gazebo, and the kids no longer hang out there, for now. They have moved on to a house on Court Street. Congrats on getting them to move, but that does not do away with the problem.”

In his report on the Garris Event Park sign agenda item from the Town Council’s Dec. 14 meeting, Saunders said, “The addition of the sign was the one concrete request of the public speaker who had concerns about the gazebo at the October Town Council meeting.”