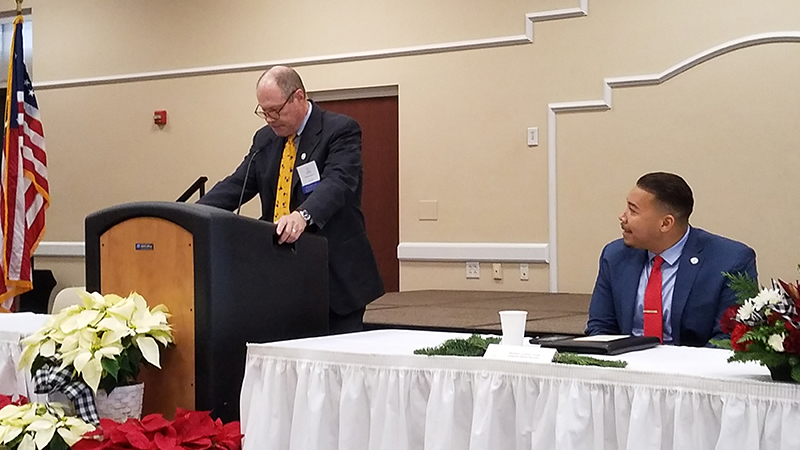 Dick Holland, chairman of the board of Farmers Bank, delivers opening remarks at the return of Isle of Wight County’s Richard J. Holland Pre-Legislative Breakfast, named for his late father, a longtime state senator.

The event serves as a forum for local legislators to share their predictions for January’s upcoming General Assembly session and field questions from their constituents. This year’s speakers were Del. Emily Brewer (R-Isle of Wight) and Jonathan Freeman, chief of staff for state Sen. L. Louise Lucas (D-Portsmouth).

Lucas herself, according to Freeman, was unable to attend this year due to being in Portsmouth that morning at the groundbreaking ceremony for the new Rivers Casino, made possible by legislation she’d sponsored in 2019 and a subsequent 2020 voter referendum.

Brewer expects the upcoming legislative session to be “a total negotiation” between “a divided House and Senate.” Come January, as a result of the November state elections, Republicans will regain a majority of seats in the currently Democratic-controlled House of Delegates, but Democrats will retain a majority of state Senate seats.

“But I think what’s going to come first is our communities,” Brewer said.

Of particular concern to Isle of Wight County’s elected officials is securing permission from the legislature to temporarily raise its sales tax by 1% to pay for the construction of a new Hardy Elementary School and the proposed future replacement of Westside Elementary. Senate Bill 1170, which would have made Isle of Wight the 10th Virginia locality permitted to enact such a tax provided a majority of county voters approve the measure via a referendum, passed Virginia’s Senate but stalled in a House of Delegates subcommittee during the 2021 session.

“Do we need to do it? Absolutely!” Brewer said, but called the proposed 2021 legislation a “Christmas tree bill.”

“Senator Lucas absolutely supports any efforts to better the opportunities, better the quality of education for children and people of all ages,” Freeman added. “Senator Lucas will definitely take a look at it.”

Brewer also hopes to push for reforms to Virginia’s Certificate of Public Need (COPN) process this coming legislative session as residents of Isle of Wight and Surry counties await State Health Commissioner Dr. Norman Oliver’s final decision on whether Riverside Health System will be allowed to construct a $100 million, 50-bed hospital in Isle of Wight County.

Virginia has used the COPN process since 1973, which requires state approval for the construction of new hospitals. The Virginia Department of Health recommended on Oct. 19 that Riverside’s requested certificate be denied — despite the near-unanimous local support the proposed hospital received at a public hearing six days earlier — on the grounds that the project “unnecessarily duplicates existing services already available in surplus” in Planning District 20. The district includes Isle of Wight and Southampton counties and the cities of Franklin, Suffolk, Chesapeake, Portsmouth, Norfolk and Virginia Beach.

“Bottom line is, we need this,” Brewer said. “We do need COPN reform, and I think there needs to be a different structured criteria because … I believe in the capitalistic society. If a hospital is willing to make that investment of over $100 million in this community and they’re willing to take that risk, then I’m here to support that.”

“Every once in a blue moon there are bad actors but 99% of our officers are upstanding citizens and should be treated as such,” Brewer said. “We know that there are morale issues in the law enforcement community and we need to hit that head on.”

Another question posed to the speakers concerned broadband, specifically when residents of Isle of Wight could expect high-speed internet availability throughout the county.

Freeman told a story of how he and Lucas were in the city of Emporia about a year and a half ago in an elementary school when Lucas asked him to look something up on his phone.

“I was trying to, we were literally inside the school … I said, ‘Senator, I can’t pull it up; I don’t have internet,’” Freeman said.

Brewer said she expects that “in the next couple of weeks, we’ll hear some really good news in this county,” concerning rural broadband.

“We have a very big problem when a gallon of milk costs the same as a gallon of gas,” Brewer said, calling upon the federal government to release a larger number of barrels from its oil reserve.

Brewer further called for economic development initiatives “tied to workforce development” to combat labor shortages, adding that statewide grants are available “if there is an affordable housing shortage” tied to the lack of workers.

As for drug abuse, “unfortunately it’s more prevalent, or becoming more prevalent in young people,” Brewer said. “Last year, we even put into the budget a recovery high school in two localities in Virginia to make sure that if this affliction happens for people that are under the age of 18 we can get them back in school and a supportive system … I think long-term though, we have to truly work in the judicial circuit, which encompasses Isle of Wight … we just brought back the drug court.”