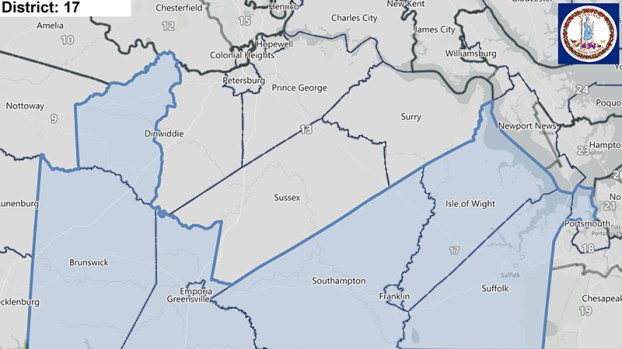 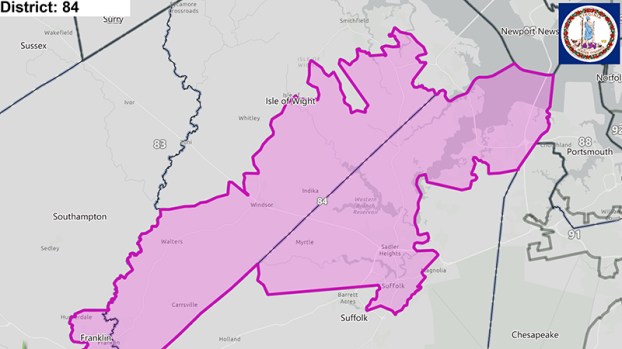 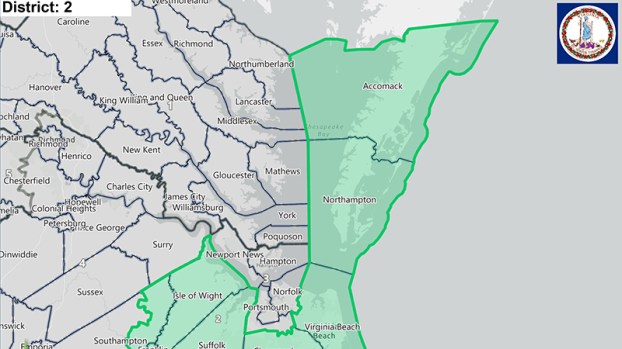 Isle of Wight and Surry counties presently form a strong Republican House of Delegates district, but would shift significantly toward Democrats under a redistricting plan the Supreme Court of Virginia released on Dec. 8.

The present-day 64th District, which includes Isle of Wight, Surry and Prince George counties, and part of the city of Suffolk, is nearly 70% white and has consistently elected Republicans since 2011, when redistricting last occurred. Per federal and state constitutional requirements, state legislature and congressional voting districts must be redrawn once every 10 years based on the latest census data.

Under the map created by two court-appointed special masters, Isle of Wight would be split between newly created 83rd and 84th House of Delegates districts. The 83rd — which would include the town of Smithfield, all of Southampton, Sussex, Greensville and Brunswick counties, the city of Emporia and part of Dinwiddie County — would remain majority-white but include a much higher percentage of minority voters, and could go Democratic or Republican by a margin of up to five points based on an analysis by the Virginia Public Access Project of votes cast in the 2016 presidential election.

A memorandum by special masters Bernard Grofman and Sean Trende has the 83rd leaning slightly more Republican based on votes cast during the 2017 Virginia attorney general election.

The 83rd would encompass much of the same territory as the present-day 75th District, which Republican Otto Wachsmann won with 52% of the vote in November, unseating longtime Democratic incumbent Roslyn Tyler.

Republican Del. Emily Brewer, who won reelection in November with roughly two-thirds of the vote in the current 64th District, would reside in the newly created 84th District — encompassing the town of Windsor, parts of Suffolk and all of the city of Franklin. The 84th would be nearly evenly split between white and Black voters, and is expected to swing five to 20 points in favor of Democratic candidates based on VPAP’s analysis. The special masters’ memo also lists the 84th as likely to swing Democratic based on its share of the 2017 attorney general election votes.

Surry would be in the newly created 82nd District, which would also include parts of Prince George County, the city of Petersburg and the remaining areas of Dinwiddie County. It would become a majority-minority district, with whites accounting for roughly 45-46% of the population, and likely favor Democratic candidates by a margin of five to 20 points, according to VPAP’s analysis and the special masters’ analysis of the 2017 attorney general race.

According to VPAP’s analysis, the map gives House Democrats a slight edge statewide, reducing the number of solidly “red” Republican seats and “purple” districts that could swing either way. The special masters’ memo, however, states Republicans “may find it slightly easier to win a majority” but “Democrats will have a tendency to enjoy larger majorities when they win.”

Isle of Wight would also become more competitive in the 2022 congressional midterms under the new maps, which move the county out of U.S. Rep. Bobby Scott’s 3rd District, a safe Democratic seat, to the 2nd District, which Democratic Rep. Elaine Luria won with 52% of the vote in 2020. Under its new boundaries, the 2nd District would encompass the Eastern Shore, all of Virginia Beach, part of Chesapeake, all of Suffolk, Isle of Wight and Franklin, and part of Southampton County.

Surry County would remain in the 4th District, which would also include all of Prince George, Sussex, Greensville, Brunswick, Dinwiddie and Charles City counties, as well as the cities of Hopewell, Petersburg, Emporia and Richmond, and parts of Southampton, Henrico and Chesterfield counties. The district is currently represented by Democratic U.S. Rep. A. Donald McEachin, D-Va.

The newly redrawn 4th District would have a slightly higher percentage of Black voters than it does currently, and as such, would “likely continue to elect the African-American population’s candidate of choice,” according to the special masters’ memo. The memo and VPAP’s analysis both show the district remaining solidly “blue,” with Democratic candidates likely to secure roughly two-thirds of the vote.

“In a very good Republican year, Republicans could win a majority of the seats in Virginia’s delegation,” but “we would expect to see a 6-5 Democratic edge,” the memo states. In a very good Democratic year, “Democrats might perhaps achieve the same 7-4 advantage that they now enjoy from having won two highly competitive seats in 2020.”

No current state senators would live within the boundaries of Isle of Wight and Surry counties’ newly created Senate districts, according to an analysis by VPAP. According to the special masters’ memo, Grofman and Trende “maintained ignorance about the residences of incumbents” since the federal and state statutory criteria for redistricting “make no mention of protecting incumbents.”

A total of nine state Senate districts and 24 House of Delegates districts would be left without an incumbent legislator, according to VPAP, while in other cases, this lack of taking incumbency into account would result in two or even three legislators — some from opposite parties — all living within the boundaries of a proposed House or Senate district.

Under the proposed map, Isle of Wight would move entirely into the 17th District, which would include Suffolk, Franklin, Southampton County and part of Portsmouth. The district would be just over 50% white and would lean five to 20 points in favor of Democratic candidates based on VPAP’s analysis of its share of votes from the 2016 presidential election. The special masters’ memo also has the district leaning in favor of Democrats.

Surry would move to the 13th District, which would be majority-Black and would likely lean heavily in favor of Democratic candidates, according to VPAP’s analysis and the special masters’ memo.

According to the memo, each party would need to win an election in an “unfriendly territory” in order to control the state Senate.

Per a 2020 change to the state constitution, Virginia’s Supreme Court took control of the redistricting process after a bipartisan committee of legislators and citizens deadlocked in October on how to redraw the state’s Senate, House and congressional districts.

The state Supreme Court has scheduled two virtual public hearings on the proposed maps, each from 1-4 p.m., on Dec. 15 and Dec. 17. According to a Dec. 8 press release from the state Supreme Court, there will be no in-person hearings. To comment, participants must email Redistricting@vacourts.gov, indicating which hearing date they’d prefer. A meeting link will be sent by email in response ahead of the hearing date. Requests to participate must be received at least 24 hours before the start of the hearing. Written comments may also be submitted by emailing remarks to Redistricting@vacourts.gov by 1 p.m. Dec. 20. Written comments will be published to the “public comments” link on the court’s website.