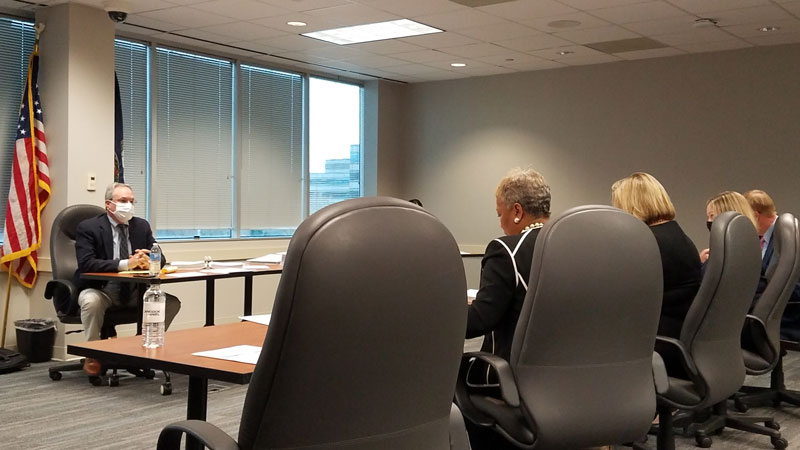 The Virginia Department of Health held an “informal fact-finding conference” on Dec. 10 for the purpose of reconsidering whether to award Riverside Health Systems a certificate of public need for its proposed 50-bed Isle of Wight County hospital.

Virginia has required state approval for new hospitals since 1973. VDH staff had recommended in October that Riverside’s application be denied on the grounds that the $100 million hospital project “unnecessarily duplicates existing services already available in surplus” in Planning District 20 — a geographic region that includes Isle of Wight and Southampton counties and the cities of Franklin, Suffolk, Chesapeake, Portsmouth, Norfolk and Virginia Beach.

The fact-finding conference functioned much like a court proceeding, with lawyers for Riverside arguing the merits of their proposal in front of VDH adjudication officer Doug Harris — and calling upon eight witnesses to testify. The proceeding was held at the VDH’s Perimeter Center in Henrico County.

In September 2012, she said, Bon Secours’ DePaul Medical Center in Norfolk was approved for two new operating rooms despite a staff report recommending its certificate of public need be denied, after an adjudication officer learned that 11 of the operating rooms staff had counted toward the alleged surplus were not general-purpose but rather dedicated to specialized types of surgeries. In November 2019, the state health commissioner approved additional medical-surgical beds at Bon Secours’ St. Francis Medical Center in Midlothian, overturning a recommended denial, after an adjudication officer found VDH staff had improperly counted obstetric beds and beds in specialty and long-term care hospitals toward an alleged several-hundred-bed surplus. When subtracting the number of unstaffed beds from the revised 380-bed surplus in that case, the surplus was further reduced to just 25, Towey said.

She asserts the VDH has made similar mistakes when calculating “a surplus of 229 medical-surgical beds in PD 20 for the five-year planning horizon” in its recommended denial. Riverside’s own calculations show only a 135-bed surplus, Towey said, which actually becomes a deficit of 79 beds when the unstaffed beds are subtracted.

Valerie Cheatham, an analyst from the VDH’s Division of Certificate of Public Need present at the proceeding, however, said the VDH “stands by” the claims in its report.

Towey’s first witness was Jessica Macalino, Riverside’s associate vice president for cardiovascular and pulmonary services, who is herself an Isle of Wight County resident. Towey asked Macalino a series of questions, including whether Macalino agreed with the VDH staff report’s conclusion that the proposed Smithfield area hospital was not needed.

Macalino and every other witness she asked that particular question all gave the same answer: “no.”

Macalino argued that while the VDH analysis of current travel times to Riverside Regional Medical Center in Newport News and Sentara Obici Hospital in Suffolk shows a 22- to 24-minute commute on paper, in reality the trip takes upwards of half an hour due to traffic congestion.

The James River Bridge, which connects Isle of Wight County to Newport News, is the longest state-maintained bridge in Virginia, measuring 4.5 miles.

“I myself have been stuck (in traffic) at the James River Bridge on multiple occasions,” Macalino said, adding that the proposed hospital would also serve Planning District 19, which includes Sussex and Surry counties.

Next, Towey called Isle of Wight Volunteer Rescue Squad Chief Brian Carroll, who testified that Isle of Wight runs about 17% of Surry County’s emergency medical service calls via a mutual aid agreement. Absent traffic congestion, it takes roughly 27 minutes for an ambulance to get from the area that would be served by the proposed hospital to Riverside Regional — just under the 30-minute standard in Virginia’s state medical facilities plan.

When an ambulance was recently called to Mill Swamp Road, it took that driver 42 minutes to transport the patient to Riverside Regional, Carroll said. Travel time for an ambulance that recently responded to Rattle Snake Trail was even higher, at 55 minutes.

Carroll added that roughly 95% of heart attack patients are diverted from Obici, the closer of the two hospitals, to Riverside Regional.

“These are real-life transport times … Time is tissue; time is muscle,” Carroll said.

Kim Liebold, a Riverside cardiac nurse practitioner and Isle of Wight resident, said her commute to Riverside Regional is 48 minutes. She then tearfully told Harris of the day her son died in her home in 2011 as she tried to perform CPR while waiting for an ambulance.

“We cannot continue to neglect the health and wellbeing of the minority community by failing to provide adequate medical services,” Butler said.

“Physicians tend to stay where they train,” he said.

Stolle, an obstetrician by specialty, added that when complications arise during labor and delivery, minutes, and even seconds, can make a “huge difference.”

Megan Merrit, administrator of Riverside Healthy Living Community — a Smithfield nursing home and rehabilitation facility — then spoke to limited choices available to the facility’s patients should they need to be hospitalized. Jim Collins, a member of the county’s Economic Development Authority, followed her testimony by stating that 60% of the county’s residents currently have to travel outside of the county to find work. A local hospital would bring new jobs much closer to home for area residents, he said.

The final witness, Dr. Nathan Wilson, said it’s been his observation as an economist and former employee of the Federal Trade Commission that lack of competition among hospital systems typically results in higher costs for medical services, which drives up the costs health insurance companies pass along to employers, and can in turn dissuade employers from hiring additional employees or raising wages. Sentara, he added, held 50% of the hospital market in Planning District 20 as of 2005, and had grown in influence to holding three-quarters of the market as of 2019 — a trend he speculated may be influenced by Sentara having created its own health insurance company, Optima.

Riverside and the VDH will have the opportunity to submit written “findings of fact” and “conclusions of law” on Jan. 21, and will have the opportunity to submit rebuttals to those findings and conclusions on Feb. 2. Harris will make his final recommendation to State Health Commissioner Dr. Norman Oliver on March 21. Oliver, who has the final say as to whether a certificate of public need is granted, is expected to make his decision that same day.