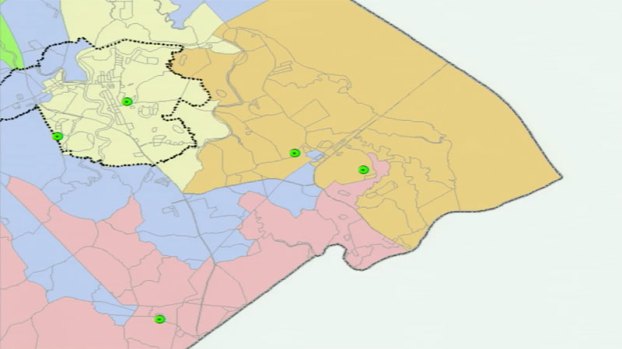 In Map 2A, the Carisbrooke development in Carrollton would move to the Windsor District and the Smithfield District would encompass all areas of the town’s limits east of the Pagan River. The green dots indicate the residence of an incumbent Board of Supervisors or School Board member. Courtesy | Isle of Wight County 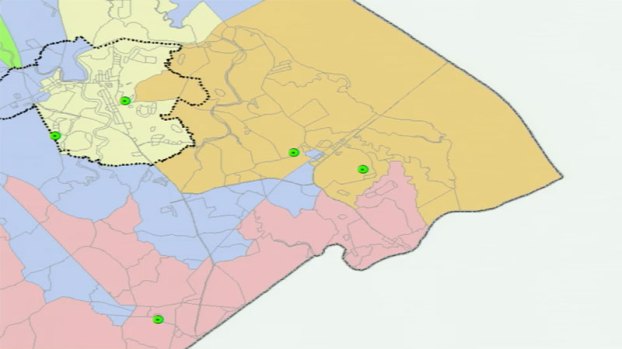 In a map proposed by county staff, the Founders Pointe development and all areas east of it would move to the Windsor District and the Newport District would extend into the town limits of Smithfield along Battery Park Road where the 812-home Mallory Scott Farm development is to be built. The green dots represent the residences of incumbent Board of Supervisors and School Board members. Courtesy | Isle of Wight County 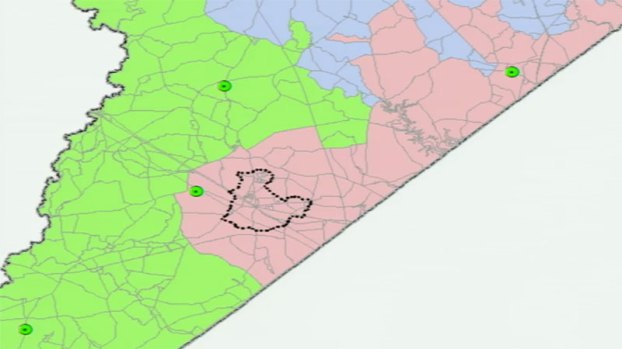 In Map 2A, the Windsor District surrounds the town of Windsor’s incorporated limits, protecting Michael Vines as the incumbent Windsor District School Board member. Courtesy | Isle of Wight County 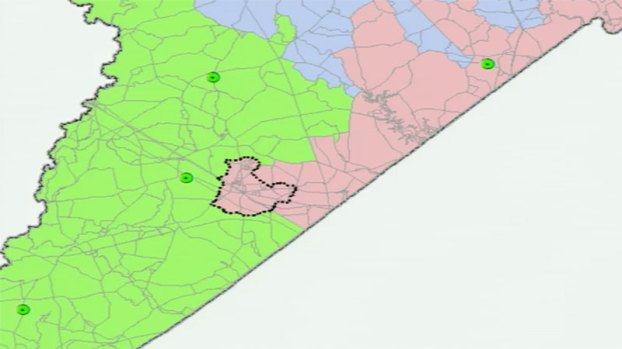 In the map proposed by county staff, the Windsor District would end at the eastern and southern limits of the town of Windsor, placing Windsor District School Board member Michael Vines into the Carrsville District. Courtesy | Isle of Wight County

Isle of Wight’s Board of Supervisors held a joint work session with its redistricting task force on Nov. 22 to discuss changes to its proposal for redrawing the county’s five voting districts based on 2020 census data.

The map advertised as the county’s preference during its Nov. 18 public hearing would extend the county’s Hardy District to encompass the Benn’s Grant development and Nest on 17 apartments, and place a stretch of Grace Street that had moved to Hardy in 2011 back into the Smithfield District. It would also move the Eagle Harbor apartments in Carrollton out of the Newport District and into the Windsor District.

At the Nov. 22 meeting, the two bodies discussed four variations of the task force’s map and narrowed their preferences to two finalists.

The first of the two — designated Map 2A — would keep Eagle Harbor in Newport, but in exchange move the Carisbrooke development on Whippingham Parkway out of Newport and into Windsor.

The second map — proposed by county staff following the public hearing — would keep Carisbrooke in Newport but instead move the Founders Pointe development and everything east of it to the Windsor District. It would also move areas Map 2A had assigned to the Smithfield District, including an area of Battery Park Road in the town’s limits where the 812-home Mallory Scott Farm development is to be built, into the Newport District.

Per federal and state constitutional requirements, the redrawn districts must be more or less equal in population, be contiguous, compact and not discriminate based on race. Districts are allowed to deviate up to 5%, meaning 2.5% up or down from the ideal 7,759 residents per district based on a total county population of 38,795, though deviations of up to 10% may withstand challenges.

Map 2A results in a 5.75% deviation, while the staff map’s deviation is only 4.4%. The staff map, however, would move newly appointed Windsor District School Board member Michael Vines outside the district he represents.

The School Board appointed Vines earlier this month following Julia Perkins’ resignation. Per state law, Vines would be allowed to continue in his role, even if redistricted out of Windsor, through the date of the November 2022 special election to fill the remainder of Perkins’ term in office.

Per the federal Voting Rights Act, there must also be at least one minority-majority district district based on the ratio of white residents to people of color and whether voters consistently vote to defeat minority candidates, which conflicts with the goal of making each district compact.

“Those (goals) compete strongly against each other because in Isle of Wight County, the minority population within the Hardy District decreased by over 8% in the last 10 years,” said redistricting task force Chairman Caleb Kitchen.

So, to maintain a 50% voting-age Black majority in Hardy “you have to go somewhere out in the county and find them,” Kitchen added, even if that means creating the irregularly shaped Hardy District proposed in the advertised map, Map 2A and the staff map.

Kitchen dismissed allegations of “gerrymandering” being behind the districts’ irregular shapes, defining the term as “the drawing of districts to either advantage or disadvantage political parties or people.”

“I can tell you our task force did not do that in any way, shape or form,” Kitchen said. “The reason these districts look like this is to try and comply with the majority-minority requirements. There is no favoritism for board members or groups of people other than what’s required by law.”

Board of Supervisors Chairman Dick Grice also asked if doing away with voting districts entirely was an option. In such a scenario, all five members of the Board of Supervisors and School Board would serve at-large, meaning there would be no restriction as to where in the county they could live and all Isle of Wight voters would be able to vote for all five seats.

“We have a sheriff, who is at-large, and he is a minority sheriff … but he was the best man qualified and he got elected,” Grice said, referring to Sheriff James Clarke Jr.

“Smithfield is certainly not a minority-majority district,” yet Denise Tynes, who is Black, got elected as the district’s representative on the School Board, Grice added.

But transitioning to an at-large voting system could potentially result in “five board members who live right beside each other on the same street,” Kitchen warned. “That may be the will of the citizens, but it certainly runs into issues that constantly come up in the southern end of the county — (people) saying the weight of the northern end would just stifle any conversation that comes from the southern end.”

Another reason for splitting Carrollton among three districts is the intense population growth the area has experienced over the past decade from new housing developments.

“What is happening in the Newport District absolutely is unprecedented,” task force member Thomas Finderson said. “If you look back at the last two censuses … you’re dealing with a rural population with a relatively small number of people.”

By the end of the meeting, the board and task force members were reaching a consensus in favor of Map 2A, but plan to hold another work session on Dec. 9 prior to the start of the regular board meeting scheduled for that evening. At the regular meeting, the board expects to vote on a final map to send to Virginia’s Attorney General’s office for final approval, per the requirements of the General Assembly’s 2021 Voting Rights Act of Virginia.